previous
Boom Swimmer Speaker Review
random
next
The Sims 4: Get to Work Review
1 like 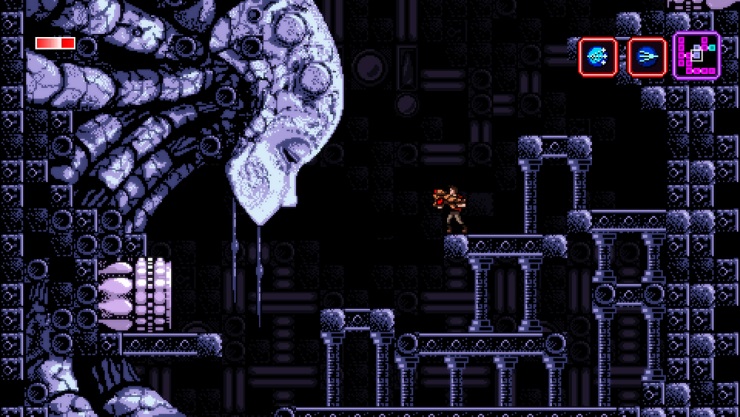 Upon picking up and playing through almost any game, you will begin to see the myriad of other titles that have influenced or shaped its design in some shape or form. And whilst that is also true for Axiom Verge – whereby veteran industry designer Thomas Happ combines key elements of classic games such as Contra and Bionic Commando to good effect – you cannot escape from the fact that the entire experience feels like a love letter to the Metroid series.

It is 2005 and a young scientist named Trace is taking part in an experiment that goes terribly awry. Through a series of 8-bit still-frame cutscenes we see Trace killed as his laboratory goes up in flames. But that’s not the end of his story and he re-awakens in a strange, alien location – filled by unfriendly inhabitants. Guided only by a voice in his head, telling him to escape whilst he still can, Trace has to fight for his life – or is it his death? Although the story does edge forward and reveal new slithers of information as you work your way through the campaign, this is a thoroughly old-school title where exploration rules over exposition. Axiom Verge is a side-scrolling action title, with many obvious links to all of your favourite side-scrollers from the heyday of the NES. For instance, Metroidvania back-tracking and map-making are key to your playthrough, but there is also multi-directional shooting and the ability to lock your character while aiming (like Contra), and other little touches that will remind you of a host of classics.

Although the emphasis is firmly on searching through the maze-like worlds on offer, discovering new pathways and secret areas, the weapons in your arsenal will become your best friends. Featuring around sixty weapon variants and power-ups, you are quickly introduced to a variety of ways to both eliminate your enemies and traverse the game world. You won’t have to wait long to gain new skills either – Axiom Verge is quick to reward players with upgraded weapons and gadgets.

All of these need to be wisely employed in order to tackle the more tricky aliens and to open up hard-to-reach areas. Different guns will need to be employed in each situation. For instance to activate hidden switches, to drill through weak parts of the environment or even guns that can reach enemies on the other side of impenetrable walls. These can all be switched between at will once they have been collected – so there is no need to worry that you are sacrificing one gun for another. The most interesting of all is a sub-set of tools that let you locate and manipulate a series of glitches found throughout the world. You will notice these blocky NES-like glitches very early in Axiom Verge, but cannot immediately interact with them. Instead of these being actual errors within the game (which would have been common in many of the titles from which Happ has taken inspiration), they are intentionally placed and must be altered using the Address Disruptor and other tools, which can remove them to open up new locations, turn enemies into useless bundles of pixels, or create platforms out of thin air – just to name a few uses. By locating these often difficult to spot glitches and exploiting them, you begin to feel like you are actually changing how the title was meant to be played.

Most situations can be tackled in a variety of ways and your first attempt may not be the most effectual – but that doesn’t mean that it won’t work. Finding the right tool for the job and learning how to defeat each enemy most effectively provides the same sort of satisfaction that the classics were famous for. You may have to work for your kill, but the reward is ever-greater if you feel like the way you defeat each challenge was of your own choosing. Discovering all of the secret areas held within Axiom Verge won’t be easy on your first run, and there is also a speedrun mode which encourages you to set a fast time and share the footage with gamers around the world. These factors may not add a lot of longevity for anyone but hardcore players, but they at least give a reason for repeat plays. Of course, whilst Axiom Verge draws on many old classics for design pointers, it does make certain allowances to the whims of the modern gamer. Save points are pretty forgiving, scattered regularly in each area. They act more like checkpoints, and when you do die, you will still maintain any progress made or items collected since your last save – you simply have your body restored back at that checkpoint. While this system is obviously less faithful to its roots, it’s a welcome addition as they eliminate the possible frustration of the needless re-tracing of your steps following a death.

The presentation is obviously the biggest throwback to the eighties, with the 8-bit graphics and sound making it a pretty authentic retro experience. Despite the intentionally limited palette size and pixel use, animations are rendered smoothly and looks a treat for those with a nostalgic eye. It also controls really well: the famous floaty jumps and slippery walking of its forefathers aren’t an issue here. The music rounds out the full pixel-powered-package, with some catchy synth action themes punctuated by sharp, shocking wails from enemies. These spiky sound effects are definitely of the genre, but can be a bit jarring after a while.

Axiom Verge does a lot of things right, and introduces some interesting level manipulation tools which give you the feeling that you have a greater than normal level of control over the world around you. The story is science fiction by numbers, so it’s unlikely to blow anyone away, and it doesn’t stray far enough from the tried and tested Metroid formula to make itself stand out as a fantastic game in its own right. But it is an undeniably fun and straight-forward title to simply enjoy, unhindered by too many unnecessary bells and whistles.

Some sounds effects can be jarring.
Minimal story.

Axiom Verge may not be much more than an homage to Metroid, but it's a very good homage.

Could Console Gaming Make You Better At Casinos?

Once upon a Jester review
Evil West | 6 Tips to get you started
Pokemon Scarlet and Violet Legendaries | How to find and unlock Legendary Pokemon
The Devil in Me | How to keep everyone alive
The Devil in Me | How to kill everyone
Escape Academy: Escape from Anti-Escape Island Complete Walkthrough
Escape Academy Take to the Skies Walkthrough
Social Media
SUBSCRIBE
All content copyright GodisaGeek.com
Fonts by Google Fonts. Icons by Fontello. Full Credits here »
Posting....