The Sims 4: Get to Work Review 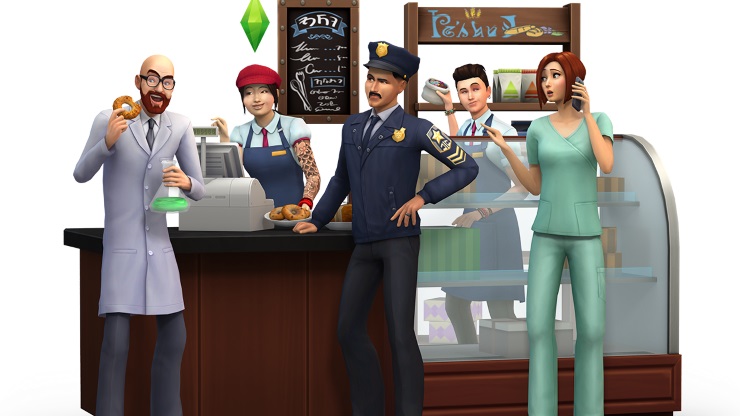 Get to Work is the spiritual successor to other career-orientated expansions from previous generations of the series, namely The Sims 2: Open for Business, and The Sims 3: Ambitions. Players of either title will see a return of a few key features, brought forward into the modern era and either stripped down or greatly built upon. The ability to open retail stores was central to Open for Business, but in The Sims 4, the whole system is either hit or miss and seems to collapse under its own ambition. However, the interactive professions introduced back in Ambitions are expanded on immensely and given a home, taking your Sims to a fully-functioning workplaces where they can track down criminals, invent new man-eating cow plants or even deliver babies.

Three new careers are introduced in Get to Work: Doctor, Scientist, and Detective. Each have their own individual and expansive workplace to explore, introducing a wholly interactive experience that surpasses that of professions in Ambitions. Job performance is measured by completing career-related tasks such as delivering medication or visiting crime scenes. The higher the performance, the more money your Sim will take home, and the more experience they will gain towards a promotion.

The hospital is the home of the Doctor career where your Sims can work their way up the employment ladder: taking them from an orderly that makes beds and delivers food to a nurse, then onto a surgeon. The more promotions your Sims get, the more objects they can interact with around the hospital, from only being able to look after patients and carry out simple tests at the beginning of the career, to saving lives, examining symptoms, and delivering babies the further you climb, providing a true sense of achievement and excitement as you work towards your next promotion. Scientists work from the Science Lab, a huge warehouse brimming with high-tech machinery of all sorts. The aim of the Science career is to achieve “breakthroughs” which allow you to build new inventions (always zanier than the last) as well as synthesize serums and genetically-modified seeds to grow strange new plants. By analyzing flora, studying slides under the microscope, tampering with chemicals, and discussing theories with your co-workers, Science Sims will gradually have more and more breakthroughs, allowing them to progress in the career faster.

Home of the detective career is the police station, complete with holding cells, interrogation rooms, crime scene investigation labs, and case rooms. As an officer of the law, your Sim will be given a new case every day to work through. From there, your Sim will deduct clues about the suspect which will be stored in their Detective’s notebook for later reference. Your Sim will be able to visit the crime scene to collect evidence, take photos, and get witness statements to help further identify the suspect. Once evidence has been analyzed and statements logged, your Sim can put out an All-Points Bulletin (APB) which transports them to a random lot where the suspect is said to have been spotted. Using the clues stored in their notepad, you must successfully identify the suspect and arrest them. Once in custody, your Sim is able to process the criminal: taking mugshots, fingerprints and comically interrogating them to get a confession. When it’s all out in the open, they’re locked behind bars and the streets are a little bit safer thanks to your help. The new careers in Get to Work feel well thought out and provide plenty for you to explore, despite some overlap between certain aspects of the Doctor and Scientist paths. The vast array of objects introduced allow for a realistic feel within the workplace, as well as the possibility to build your own workplace if you so desire since the majority of these items are available in Buy/Build mode.

Also new is the ability to purchase and open your own retail store. The possibilities are endless, being able to sell virtually anything you want: from books; to furniture; to your own culinary creations. There is a limited number of pre-built retail lots to purchase (a measly four), but the ability to convert any residential lot into a retail lot is a smashing new feature which allows for creativity when designing your own business. However, despite it sounding like a stellar idea on paper, the retail system seems stripped back and appears to struggle when compared to previous incarnations, such as nine-year-old expansion Open for Business. There are no major innovations to sell products to customers: they just appear to wander around and depending on how happy they are and your level of interaction with them, will buy something. You are able to discuss their price range, enthuse about your store and the like, but it feels like it’s not doing much to influence their decision. A lot of them just seem to congregate around a single item (usually the least expensive, the cheapskates) and talk. Oh, and don’t expect any help from your “faithful” employees either, as no matter what job you assign them to, their slow reaction usually result in angry customers leaving in a cloud of dust. Queuing at the cash register is clearly so 2006, because employees will now use a tablet to let customers pay for goods which feels disjointed as they wander all over the shop trying to find paying customers. With retail, there is also no real “leveling up” as such. Your business won’t grow and become popular like it did in previous games, instead the only thing that is remotely like expansion is the ability to purchase perks to get more employees, restock faster, and so on. There is no real motivation to continue with retail stores and it becomes tiring after a while. If you can get the right business going, it can be a lot of fun, but despite this, it still feels a bit hollow and hit or miss – paling in comparison to the system which made Open for Business so utterly compelling to play.

Although nine years old, Open for Business still provides the most entertaining retail store simulation in the series and if that’s what you’ve come to Get to Work for, don’t expect to be blown away. Replayability may be a concern in the future when all careers have been played through and have tired themselves out, but despite being let down by the retail mechanics of the game, the interactive careers are a welcome new addition to the series – introducing workplaces for the first time, a feature which has been in high demand for years. Get to Work does what it says on the tin by getting your Sims actively working, and it feels refreshing after the disappointing careers which were in the base game. The workplaces are well designed, entertaining to play around with and add a new dimension to The Sims which will provide hours of colourful gameplay to series fans and perhaps change opinions on The Sims 4 as a whole.

Retail system is fun but ultimately underwhelming.
Replayability of careers are a concern.
Outshone by previous business-orientated titles.

Get to Work introduces some brilliant interactive careers with workplaces being brought to the table for the first time, but is let down by it’s barely-average retail system which leaves you wanting so much more.