Back to Bed PS4 Review 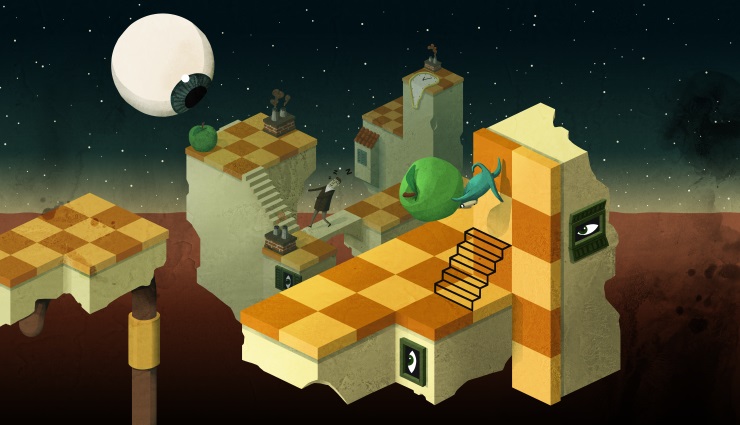 I’ll be honest; when I first saw the trailer for Back to Bed I couldn’t help but think it looked rather similar to ustwo Games’ puzzle, Monument Valley. Thankfully, Back to Bed stands on its own and manages to offer a different experience to the multitude of puzzle games currently out there, even if certain aspects failed to deliver, allowing me a relatively stress free ride to the finish line. There’s no doubt that the level design and artistic inspirations help to make Back to Bed more appealing than the gameplay actually is, but on the whole, Bedtime Digital Games’ effort isn’t that bad.

You are Subob, the subconscious representation of Bob – a sleepwalking fellow in desperate need of a deep sleep. Unfortunately there are countless challenges that are stopping him from doing so and it is down to you to keep Bob safe and sound, all while trying to lead him up the wooden hill to Bedfordshire. Subob is a weird little being that glides around the screen in a light blue pyjama-like onesie, trying to remain one step ahead of his clumsy and unaware counterpart. I guess it doesn’t really matter what Subob is – in fact it was a challenge in itself to work out if he was an animal or a samiad-type thing. The whole aesthetic is pleasingly bizarre: not only are the characters uniquely drawn, but the puzzles themselves are oddly hypnotic. The clear likeness to Salvador Dali’s work is more of a respectful nod than straight-up bootlegging, and the incorporation of M.C. Escher’s 1953-released masterpiece, relativity is well-implemented. The voice that occasionally pipes up as the game progresses reminded me of Twin Peaks; I was back in that red room as the wavering tone of my monotonous guide not only helped me, but unnerved me at the same time – David Lynch was clearly another muse that the developers wanted to include in this warped puzzle-platformer.

Throughout the levels, all you really need to do is pick up fish and apples. Yep, fish and apples. I mean, what else do you need to help a sleepwalker in a maze of peculiar enigmas? Bob moves in one direction and only an obstacle in his way will change that. If you place an apple in his path, it will force him to turn clockwise. You need to make sure that when he turns clockwise, it leads him towards the wooden door that precedes his comfy abode, and not off the edge of one of the platforms, straight to his apparent death. The flat fish act as bridges to other parts of the level, and come in very handy if your bed is on the other side of a stage. There are weird clock men, whale trains, holes with teeth, pipes with pursed lips that blow you away and angry canines that all pop up from time to time. None of them like you and will do anything to keep you from a peaceful sleep. You need to outsmart them, and use the tools at your disposal to keep them from accomplishing their goal. Over all 30 levels, there wasn’t a moment where I felt particularly challenged; don’t get me wrong, it wasn’t easy, exactly. There were times where I died a substantial amount of times, but it didn’t push my buttons or force me to rage quit. It was more of a bumpy ride than an all-out barricade in the middle of the road. There is a “nightmare” mode that ups the ante and delivers a much harder challenge upon completion of the game, but by the time I was finished, I had no real inclination to return. The game probably took me around and hour and a half to finish. I’ve played other games on my mobile that have lasted longer than that (cough, Monument Valley) and I somehow feel that it is better suited to the iOS or Android systems and not the console medium.

Back to Bed helped to pass an hour or so, but it didn’t really engage or peak my interest past its pretty design. Bedtime Digital Games have a nicely crafted title on their hands. The puzzles are varied and the look and feel are unlike anything out there at the moment. If you do enjoy the puzzles and remain invested until the end, you can try your hand at the harder modes that follow, which will give you a few more hours, but these new levels are only replicas of the original 30 with moderations to how you finish them. If I had an iPad or iPhone, I’d certainly take it with me on the way to work, but I’d prefer to use the console for a more engaging experience.

Back to Bed is a game that will keep you occupied for a short time. The design is something to be admired, but if you’re looking for a more engaging experience, I’d go elsewhere.