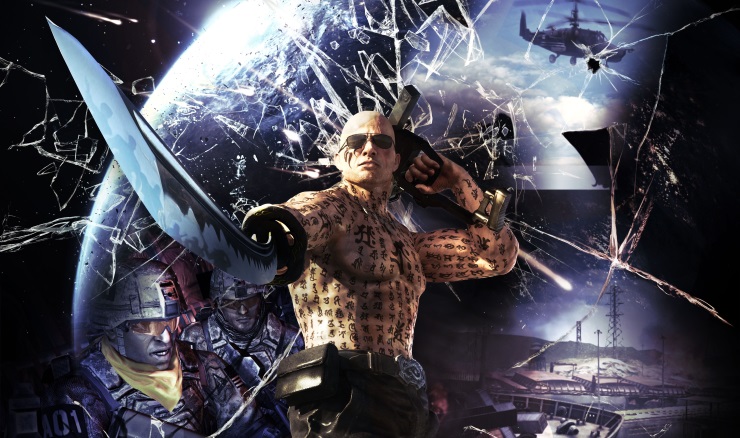 On paper, Devil’s Third is my kind of game. A third-person hack and slash shooter with nods to under-appreciated efforts like Wet and 50 Cent: Blood in the Sand, it was first announced for PS3 and 360 several years back under THQ’s banner. After they closed for business, rights passed to developers Valhalla Games, and Devil’s Third was eventually picked up by Nintendo to be released as a Wii U exclusive.

To call Devil’s Third a “bad game” would be far too neat for such a messy experience. There are stages of bad in Devil’s Third – there are layers of bad. For instance, Ivan (the protagonist) is a six-foot-four, shaven-headed, heavily-tattooed, chain-smoking Russian. Just read that sentence again. Visually, it’s even worse. It’s hard to imagine the meeting of executives where this design beat off the competition – but then you wonder if that’s the point. Did someone say, “I’m sick of action heroes looking like Nathan Drake. Let’s go nuts!”? And how many times do we have to see him nonchalantly light a cigarette mid-firefight before we accept that he is the coolest soldier ever to walk into a war zone topless? It’s almost painful to watch such awkwardly macho posturing. The story plays out as though it desperately wants to be Metal Gear Solid. All the world’s satellites are destroyed by a terrorist organisation called the Sword, whose cadre of lethal assassins – including a blonde whose body suit might as well be painted on, and a Mickey Rourke lookalike called “Big Mouse” (seriously) – used to employ Ivan and a sniper code-named C4. When Ivan and C4 refused to take part in the murder of innocent civilians, children in particular, Big Mouse turned on them. Although C4 helped Ivan escape, she was shot and presumably killed, while Ivan himself was arrested by the UN and thrown in prison until the events of Devil’s Third.

It all kicks off when the bad guys start dropping satellites out of the sky, resulting in a complete information blackout and leading to a global war for supremacy, because that’s the only possible outcome of any worldwide catastrophe. Regardless of the silly premise, all roads lead to professional hard-nut Ivan going on a suicide mission with a squad of veteran marines to get his revenge and, if there’s enough time between vengeance and drinking, maybe save that world thingamajig that everyone’s so concerned about.

Oddly, mirth aside, there are surprising story beats to Devil’s Third that hint at the possibility of a deeper, more emotive plot. That they’re side-lined almost instantly every time in favour of another one-liner or another gargantuan boss to fight is more disappointing than infuriating. I’m not suggesting Devil’s Third has the foundations to be much more than it is, but there are occasional flashes of emotion, the odd line here or there in the script, that makes you believe it could have been greater. Whether it could have or not, it damn well should have been. Everything is just sloppy. The shooting is imprecise, the melee combat messy and unfocused. You can switch seamlessly between guns and whichever melee weapon you’re currently rocking mid-fight, which would be really useful if it wasn’t all so hit and miss. Without a dedicated target lock or responsive controls, melee combat isn’t the joy that Valhalla want you to think it is. It’s taken pains to include a different execution animation for every weapon, and some of them are satisfying the first few times they happen, but they soon get old. Actually, they’re kind of indicative of Devil’s Third as a whole: everything is cool for about five minutes, then you realise that this is a game without a single original bone in its body.

The graphics swing between passable and awful, with low-detail textures, bland environments, and decidedly last-gen animations. Nothing really has any impact and within a few hours I found myself just button-mashing through the identikit stages, jumping on a mounted gun here, lasing a target for airstrike there. The missions are far too long, culminating in boss fights that range from mildly entertaining to horrendously cheap. One knife-wielding boss fairly early on had me rage-quit three times before I managed to fluke my way past him. After that I kind of resigned myself to the fact that Devil’s Third was never going to be real fun, but at least forcing myself through it might feel like an achievement. Things that should be present in action games nowadays simply aren’t here. Environments are indestructible, and even cardboard boxes and wooden barriers can weather a sustained barrage of weapons fire before they finally disintegrate. There’s no substance to it all, no real context to coherently tie it all together: every mission consists of walking forward while shooting any enemy dumb enough to poke his head out – which is all of them.

If there’s any fun to be had at all, it’s in the multiplayer. While you can opt to join one of two factions or remain a factionless mercenary with no loyalties, there aren’t a great many differences between sides. The trick is still to kill your enemies quickly and brutally, while earning one of three different in-game currencies with which to buy cosmetic upgrades, new weapons and mods or special abilities like airstrikes. The multiplayer works surprisingly well, in fact, mostly because it takes the stuff that Devil’s Third gets right – manic, balls-out action – and removes all the clumsy, posturing storytelling and unleashes you on each other in arenas designed for going crazy in. It suffers no less stuttering, glitching and slowdown as the campaign, but you mind less because it’s so mindlessly cathartic. Even some of the unlockables are bonkers, adding psychedelic chickens and artillery barrages to the mix. The messy controls work well here, too. Charging up walls with the weird jump-scramble move is a great way to get the vantage point, and it makes the maps wonderfully vertical. Melee kills are gruesome and brutal – and highly satisfying with it. The various modes aren’t anything particularly interesting, but Battle Royale’s free-for-all insanity might be the best option available.

While a decent multiplayer element just about saves it from being complete failure, even that can only deflect so much ire. Devil’s Third is an ugly, unoriginal, archaic adventure that seems determined to sabotage everything good in it. The mid-game bait and switch is heavily signposted by the second boss fight, so even the potential “what the hell” moment is dampened.

The sad fact is that Devil’s Third is not good enough in 2015, regardless of which console it’s released for. The Wii U may not have the horsepower to match PS4 and Xbox One, but this is the console that gave us ZombiU and Bayonetta 2. It can handle a lot more than Devil’s Third is dishing out, and Valhalla’s game simply under-performs in every area that counts.

Multiplayer can be fun, with loads to unlock.

Devil's Third is an ugly, unoriginal, archaic adventure that seems determined to sabotage everything good in it.

Just what the hell is Devil’s Third?