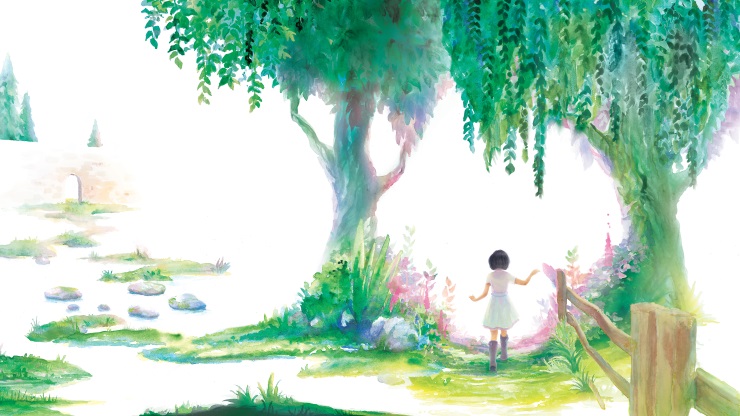 I enjoyed colouring books as a child. I would colour the images on the page and pretend that as I was doing so the creature or thing I was colouring was gradually coming to life. It was this memory that first sprung to mind when I started playing Beyond Eyes, a new downloadable title from Indie studio Tiger and Squid and Team 17.

The story focuses on a young girl named Rae who, through a small exposition at the beginning of the game, we find out is blind due to an unfortunate firework incident earlier in her young life (remember kids, don’t play with fireworks!). Flippancy aside, Rae’s blindness is used as the core mechanic within the game. As Rae explores the world around her using a mixture of touch, sound and smell, it gradually comes in to focus in a beautiful dreamy watercolour palette. Sounds becomes gently pulsating, half-realised images of leafy trees, fountains, washing flapping on a line, that draw Rae over to literally paint the full picture, with it sometimes turning out to be not quite what she imagined.

Beyond Eyes is a lonely tale, and Rae is a terribly lonely child. Growing up as an only child in the far North East of Scotland on a military camp, I can certainly empathise with her desire to find the only friend she appears to have. In this case, it’s a fat ginger cat she has named Nani. One day, Nani goes missing, and so our story with Rae begins as she ventures outside of the safe confines of her garden in to an unknown world. It’s a lofty ambition to tell a tale through the eyes (so to speak) of a blind person, but there were times playing Beyond Eyes where I felt that it was trying to be so earnest in the detailing of how it would feel to be blind that it forgot it was also a video game. Rae understandably walks cautiously, and slowly, taking her time to make sense of the environment around her, but her pace is excruciating to play. Much like Rae, you have no idea where to go, and with very few visual clues to the general direction in which you should be heading, you’re left to meander through the white space slowly… oh… so… slowly, painting it as you go.

Gradually, obstacles like walls and fences and occasionally things that Rae needs to overcome block your direction and you need to backtrack and try a different route. The exploratory aspect of the game has the potential to be delightful, the visual style encouraging you to explore to see more of the landscape beautifully come to life, but the pacing of Rae’s slow steps ultimately makes exploration a chore.

The game is split in to rough chapters with environments changing from open fields to woodland, a small town, and what appears to be a port. There are some simple puzzles that Rae needs to solve in order to proceed, and most of these are presented in a meaningful way, providing an opportunity for the resolute Rae to overcome her fears and grow in character and confidence. Games like Beyond Eyes are meant to illicit an emotional response from the player; we are to empathise with young Rae and guide her through her unseen world to safety, and at roughly two to three hours of play time Beyond Eyes does just enough to ensure that this continues right up to the bitter-sweet denouement. However, due to the slowness of Rae’s meandering even the mild peril she encounters and the inner strength and courage she finds to continue was not enough to stop the erosion of any connection I had with her and the plight of her fat ginger cat.

I’ve resisted using the term “Walking Simulator” to describe Beyond Eyes, as I think that it trivialises what the game is trying to achieve, and it is for that attempt to create a sense of what a devastating disability like blindness could be like that I think the game is admirable. It would be safe to say that Beyond Eyes is a game that most people will struggle to appreciate. Its core premise is one that I suspect the majority of players will not hold in regard, and even if they do, the manifestation of that idea through the pace of Rae’s walking makes that harder to understand. It’s a lovely idea, presented in a beautiful, dreamlike way, however it comes at the expense of engrossing gameplay.

Beyond Eyes most certainly is not a game for everyone. It's a noble attempt to show life with a disability through a clever mechanic, but sadly at times it forgets it is also a video game.