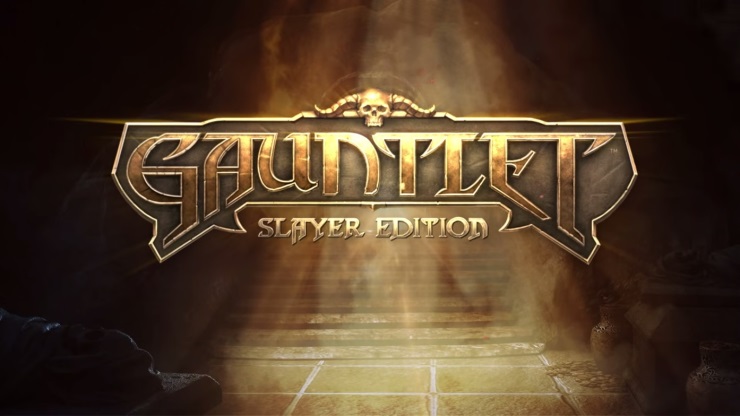 Before Diablo, the best title to turn to for multiplayer dungeon-crawling was Gauntlet, a manic hack and slash adventure featuring a quartet of fantasy archetypes and bite-sized levels filled with treasure and monsters. The recent reincarnation was less well-received than the original way back when, mostly because we’re in the 21st Century now, and dungeon crawl enthusiasts expect a bit more hack for their slash thanks to Blizzard’s seminal loot-a-thon. Now bumped over from PC to PS4, the Slayer Edition of Gauntlet comes complete with an array of tweaks and improvements, including customisable loadouts, co-op-friendly special attacks, an Endless mode and a hard-as-nails, wave-based Coliseum mode.

It’s clear that developer Arrowhead have worked hard to give us plenty to grind for, and there are now more uses for that bountiful gold than ever before. Characters can be customised with head and body types, primary weapons, relics, talismans, and capes earned by beating the Coliseum. It sounds slight in this day and age, but such things make a major difference, especially when you consider that everything is unlocked in-game with no microstransactions – something they could easily have shoe-horned in to spin some easy dough. Because they avoided that pitfall, you feel compelled to play Gauntlet and unlock that lovely fur-lined body armour for your barbarian savage. The brass-tacks premise is that you take your chosen hero into the Gauntlet to slay enemies for gold and glory – and that’s about all there is to as far as plot goes. The Conan-like Warrior, heavily armoured Valkyrie, Elf ranger and spell-slinging wizard all have different play styles, made even more varied by their gear. Potions in Gauntlet don’t heal you; they instead have wildly varying effects based on the Talisman you’re currently wearing. For example, one turns the potion into a grenade, another into an area of effect explosion. Relics are similar, in that they grant a powerful ability on a cool-down, such as a boost of speed, increased damage or temporary invisibility.

By giving us whirlwind or sweeping attacks for the melee characters and crowd-control skills for the ranged and support classes, Arrowhead have added a layer of genuine strategy to the mindless button-mashing, and each class feels important in the grander scheme. Sadly, though, this results in Gauntlet appealing almost exclusively to fans of multiplayer. I know that’s the whole point, but it’s worth noting that soloists will likely struggle with anything but the campaign on normal, and even that’s incredibly tough later on. Even with four players, the Coliseum can be an utter nightmare by the fifth wave. The problem isn’t necessarily the enemy mix, either, or even the actual difficulty, for that matter. The issue, in fact, lies with the screen. Your character is rendered so tiny during multiplayer, even on a massive screen, that it’s hard to know what the hell is going on. It’s frustrating to find yourself caught in a press of skeletons and have to watch your Health swiftly disappear because you can’t see exactly where you are or what you’re swinging a battle-axe at. It’s not entirely game-breaking, but it’s certainly not easy on the eyes.

Lives are earned by killing enemies, which turn into Skull Coins and essentially grant you a Continue. In the Coliseum, these extra lives are shared between players, making it even harder to survive. Of course, one of Gauntlet’s simple joys is the art of the Troll. See, in order to replenish health, you must eat food. If your life is full, you may opt to destroy any food you find instead, thus preventing others from healing. But why would you do that? Because when you die, all your gold becomes lootable, that’s why, and it’s all fair game. Finders keepers, and all that. The online modes work well enough, but this isn’t half as much fun with strangers. There’s also a problem with host migration – if the host leaves, it’s game over and you’re booted back to the character screen. This can be especially annoying when you’re a good distance into the Coliseum or Endless mode.

Ultimately, despite the additional skills and modes, Gauntlet: Slayer Edition remains very much Gauntlet. It’s a game with its heart in the right place, but one that falls short of glory because of its mean-spirited difficulty and messy action. If you can get by that and you don’t mind your challenges steep, then there’s loads here to get into, and when played with friends who communicate and can have a laugh at the expense of each other, it becomes something really quite brilliant.

A worthy port of the PC reboot, Gauntlet: Slayer Edition adds loads of stuff to unlock, new abilities, enemies and characters (if you buy the DLC), but some will be put off by the unforgiving difficulty and sketchy servers.