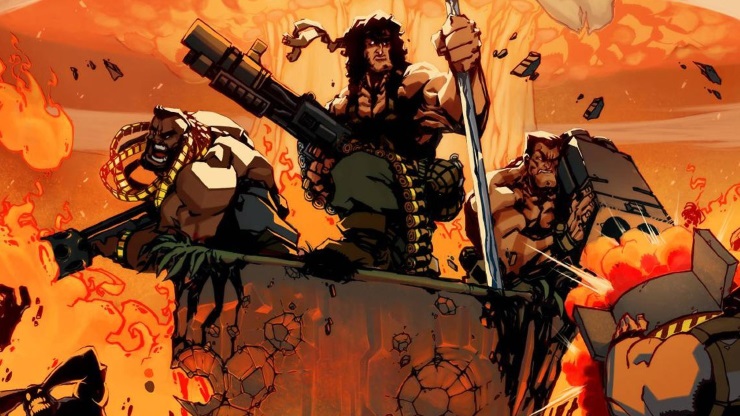 Action movies have never really been my thing. Sure I have watched a few in my time and know all the big ones, but I would by no means consider myself an expert, and nor would a typical action film be my choice of viewing for a night of Netflix and chill (Louis Theroux on the other hand is a great option). However, since loading up Broforce I have been on a mission to watch as many awesome action movies as I can, and somewhat weirdly the more I watch the more I appreciate Broforce.

See, when I first started playing Broforce I could tell it was a good game. I understood that the Bros were heavily inspired by action movie heroes and that the entire game was basically a playable 2D action movie. But what I couldn’t appreciate with my somewhat limited knowledge was just how good some of the character representations are, I mean some of them are so close to their movie counterparts that I’m amazed there aren’t copyright issues.

The likes of Rambro, the Brominator and Indiana Brones are just a handful of the well known names, while more niche Bros such as Ash Brolliams (Ash Williams from The Evil Dead), The Boondock Bros (Connor and Murphy MacManus from The Boondock Saints) and Brochete (Machete Cortez from Machete) are ones that you may not know straight away but are still faithfully recreated. Despite the pixelated art style (which is beautiful, I may add), it is always immediately obvious who each Bro is thanks to their great sprites and their weapon of choice. You start out with just Rambro, but throughout the levels you will be able to free prisoners of war, and after freeing a certain amount new Bros will unlock and your roster will quickly grow. At the beginning of each mission you will start with a random Bro; they could be a perfect fit for said level thanks to their weapon or other ability or they might be the worst possible Bro for that situation, it’s all down to the RNG gods. Freeing a captive Bro will not only give you an extra life, but will change you into a new Bro, which creates an interesting dilemma: do you save the Bro to get the extra life but at the cost of losing your current Bro for that level, or do you ignore the captive bro and hope you can complete the level without dying? Usually the former is the best choice, but there have been times when I have purposely not saved a Bro in order to keep playing as one of my favourites such as Bro In Black.

Actually playing the game is remarkably simple when put into words: you just have to get from the left side of the level to the right, kill the devil at the end and jump onto a chopper to make your escape. However, lining the way are tons of enemies, each of which will kill you with only one shot. They don’t necessarily have to be killed in order to complete the mission but getting past them isn’t always easy if they are still alive. There is a somewhat decent variety in the enemies on offer, with some of the bigger foes being incredibly difficult to bring down if you have one of the weaker Bros. There are typically multiple ways to advance across each level, or you can create your own paths as the whole level is destructible, meaning that creating a massive tunnel under all the enemies, then popping out at the end to kill the devil and jump on the chopper is a legitimate, if somewhat boring, strategy. The destructible environments can also result in your death: if a brick drops on your head you unsurprisingly die, so blowing your way through every wall isn’t always the best option either.

Personally I found a slower approach worked best but when I played with some friends (this is the perfect local co-op game): they wanted to run through as fast as possible killing whatever was in their way but not much else. I have to admit that shooting the hell out of everything while sprinting and jumping rapidly through a level is incredibly good fun when it works. Shooting everything also means that you will see more dead bodies on the brilliant end of level screen that shows a timeline of all the deaths (both foes and Bros) throughout the level.

The controls are incredibly simple with buttons for jump, attack, secondary attack (a limited use special ability such as grenades, turkey bombs or in the case of Indiana Brones, a six round pistol to accompany his signature whip) and WASD or an analogue stick for movement. Using a controller certainly feels more natural, and the new Steam controller works incredibly well with it, but regardless of input choice it’s easy to get the hang of.

There isn’t really a comprehensible story and there are only a handful of different locations you will be fighting through that don’t really differ all that much – although the Hell levels are much cooler than the rest based on setting alone. What this results in is a fun title that doesn’t really offer an extended reason to play. Unless you bring it out for co-op sessions (which you totally should), there aren’t more than a few hours of gameplay here. While it may not have been designed to be a narrative heavy experience, a better reason to keep playing would have been greatly appreciated.

It is undeniable that Broforce is one of the most fun games to play ever. Constantly switching between classic action movie characters you always wanted to play as allows many childhood fantasies to play out on the screen, while shooting the shit out of everything will always be entertaining, and is even better in co-op. However, a lack of a story and very limited playtime put a slight downer on things. If you are looking for a few hours of great fun or something to bust out at your next LAN party you can’t go wrong.

Not a lot of solo replayability.
Not particularly varied.

An incredibly fun and action-packed experience, perfect for local co-op.