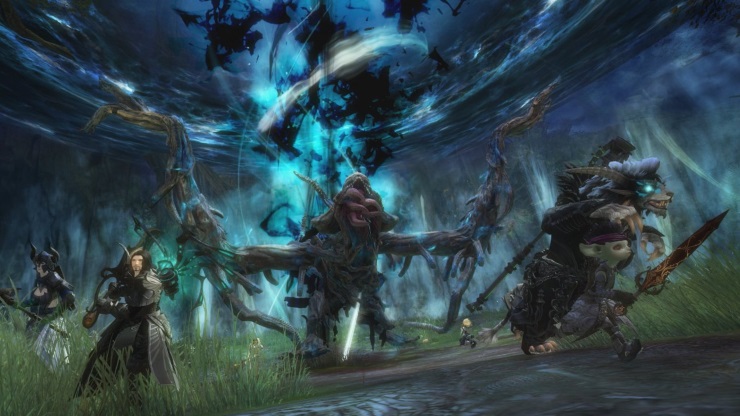 The reason I generally stay away from MMOs isn’t that I dislike them; in fact, I think that if any game will give you great value for money, it’s a game like Guild Wars 2. My problem is simple: I become obsessed with them. They suck you in with rich open worlds, clever gameplay and fantastic social interaction that you can’t get anywhere else. It is an addictive medium that will absorb hours of your time and if you are anything like me, a great MMO is like a drug. Heart of Thorns is the first expansion for the 3-year old PC game and it has been interesting to see whether or not an expansion this late on in Guild Wars 2’s life is a much needed revitalisation for the series.

From the very start of Heart of Thorns, you are thrust into the battle. There is no easy way to say this: shit is going to go down. You carry on from where The Living World Season 2 finished. Mordremoth, one of the Elder Dragons, has been awoken, and the Pact has failed in their attempt to destroy him. With the airship armada in tatters, strewn across the Maguuma Jungle, it is up to you as a commander of the Pact to unite an army and destroy Mordremoth and his minions once and for all. Within an hour of the story, you are taking part in an epic battle with some of the corrupted Sylvari (a race that have been seduced by the Elder Dragon’s power). As the story progresses, you are introduced to characters old and new, brought to life by excellent voice acting. It’s easy to overlook an actor’s role within a video game, but Heart of Thorns deserves to be praised for its wealth of thespians. The music is just incredible. Right from the opening cinematic, the sound is astonishing, bringing a score just as epic as the likes of Howard Shore’s from Lord of the Rings. Maclaine Diemer brings a great sense of urgency and despair to the game, making you feel that your quest is a worthy and important one.

Visually, Heart of Thorns isn’t too bad either. From fully realised 3D modelling in its cinematics to the paintbrush style seen in the detailed cut scenes, it is clear to see how much care has been put into crafting the expansion. The new areas look stunning. The Heart of Maguuma features four open-world maps, spread across different landscapes and features some of the nicest level design to date. ArenaNet has done a great job with what they’ve got, and even if the actual gameplay looks a little dated, it still does a fantastic job of giving the new areas a rich density across its climates. One of the best new features of Heart of Thorns is the Revenant profession; you are a soldier that bears heavy armour, with the ability to call upon The Mists to invoke the power of some of the most legendary heroes in Guild Wars lore – all with unique specializations and 5 legendary stances. You can unlock new skills as well, such as “Envoy of Sustenance” which increases boon regeneration, and “Bolster Fortifications” which grants protection to any of your allies within a close proximity. My character is a human Revenant, and having this class helped me to defeat the Mordrem (essentially what the Daleks are to Davros) greatly. I called upon the Legendary Dwarf Stance to aid me in battle many times and whether I was victorious or not, the ability to use this power helped me no end.

As for ways to improve all of the professions, Heart of Thorns has added Elite specialisations, meaning that for every class there is now a specific trait upon which to build. Each new specialisation allows you to wield a new weapon that you previously couldn’t. For instance, an Elementalist can unlock Tempest, a new specialisation that gives them an off-hand warhorn and the ability to utilize shouts – supporting their team in close range by offering heavy damage to any of their enemies. This is a great new feature and helps to enhance the game after you’ve maxed out all your other skills and traits on the road to the prestigious level 80. Heart of Thorns also introduces a Mastery System, helping to give players who have reached the maximum level something to do with the XP earned in the expansion. Masteries are special abilities available to each player dependent on the region they are in. The two different regions (Heart of Maguuma and Central Tyria) have different tracks to unlock. By completing group events, story quests and earning hero points, you will gain XP to unlock mastery points to use for the different tracks (still with me?). This is all well and good, but I found a few stumbling blocks along the way. The story requires you to have certain tracks (such as the new Glider track: an ability that gives you a hand glider to traverse the terrain in a much more efficient way) before you can proceed, so expect to put a lot of work into getting that XP for you mastery points. It isn’t a bad system, but it can hinder your progression in the main story greatly.

The new WvW map, Desert Borderlands, has 3 keeps all with different themes: earth, fire and air. Due to there being special Halloween events on at my time of playing, the Desert was just as baron as in real life. I came across barely any other players, meaning my world of Gunnar’s Hold had nothing to battle. The PvP content is more structured, including a new game mode called Stronghold, and there are new and updated reward tracks for you to reach. These additional features help to give the multiplayer a little more life, but when you have such exciting modes as Conquest already in place, the new content only acts as a further extension to Guild Wars 2’s impress PvP environment. There are new Guild Halls included in Heart of Thorns, meaning you and your mates can group together before quests, exchange equipment or just chat about the weather. There is also a plethora of changes to how guilds work, including reworked guild chat, new currencies and missions – all helping to fine tune how the feature works. New fractals have been included, along with 10-player raids to battle through, so there can’t really be any argument as to the lack of features in Heart of Thorns. Even if the rewards for the raids aren’t particularly exciting, there is still much fun to be had in taking on the enemy with 10 fellow warriors.

Heart of Thorns is an enjoyable experience with an overwhelming amount of things to do. For veterans of Tyrian warfare, there may not feel like there is much variety in the new expansion, even though there is a completely new story arc and a new way to level up your character after the level 80 mark. For brand new players who have only recently downloaded Guild Wars 2, Heart of Thorns is a perfect extension of the experience. Whether you feel the high price for the expansion is worth it or not, there is no denying that ArenaNet has gone all out in providing a rich and engrossing experience for players that are all at different points in their journey.

Mastery System is a little confusing and restricting.
PvP hasn’t been massively updated.
Gameplay visuals are a little dated.

Heart of Thorns is a worthy addition to the Guild Wars 2 world that brings enough new features to the table to keep the franchise going for a few more years.