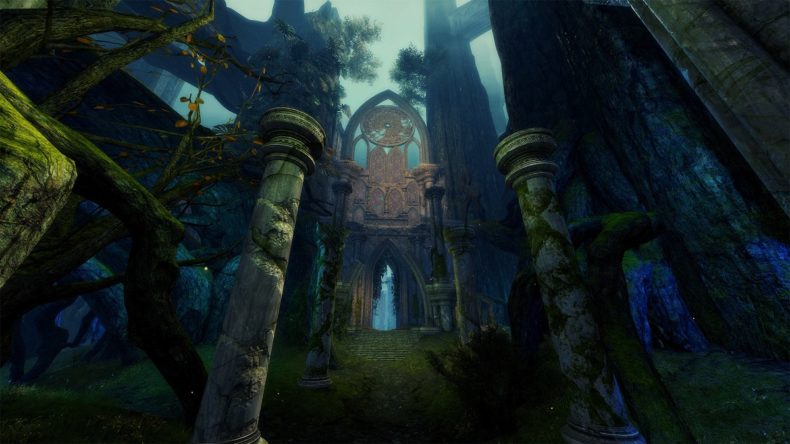 Next year, Guild Wars 2 will be celebrating its 10-year anniversary. It’s crazy when you think ArenaNet are still pumping out new content. Seldom developers stick by their game for close to a decade, but here we are. It’s a testament to their game that players are still lapping up one of the most successful MMORPGs of all time. The third expansion for GW2 is almost upon us. End of Dragons is set to offer a new story, regions, combat mounts, and more. I recently got a chance to witness first hand how many of the new features work. ArenaNet aren’t messing around. They are keen to keep their fanbase happy, and I doubt those that love GW2 are going to be disappointed.

While much of the story was still kept under wraps, there was still plenty I got to see and do. Before battling in the new location of Echovald Wilds, I travelled to the new Guild Hall. The peaceful area surrounded by a vast lake, and is somewhat smaller than before. This is in part due to it being designed for smaller Guilds that are lacking a lot of members. After chilling out in the Guild Hall, I hopped on one of the new multiplayer vehicles and did a bit of fishing. The skiffs are medium sized boats that can accommodate five other players. They’re easy to summon, and allow you to sail across Tyria and Canthra. 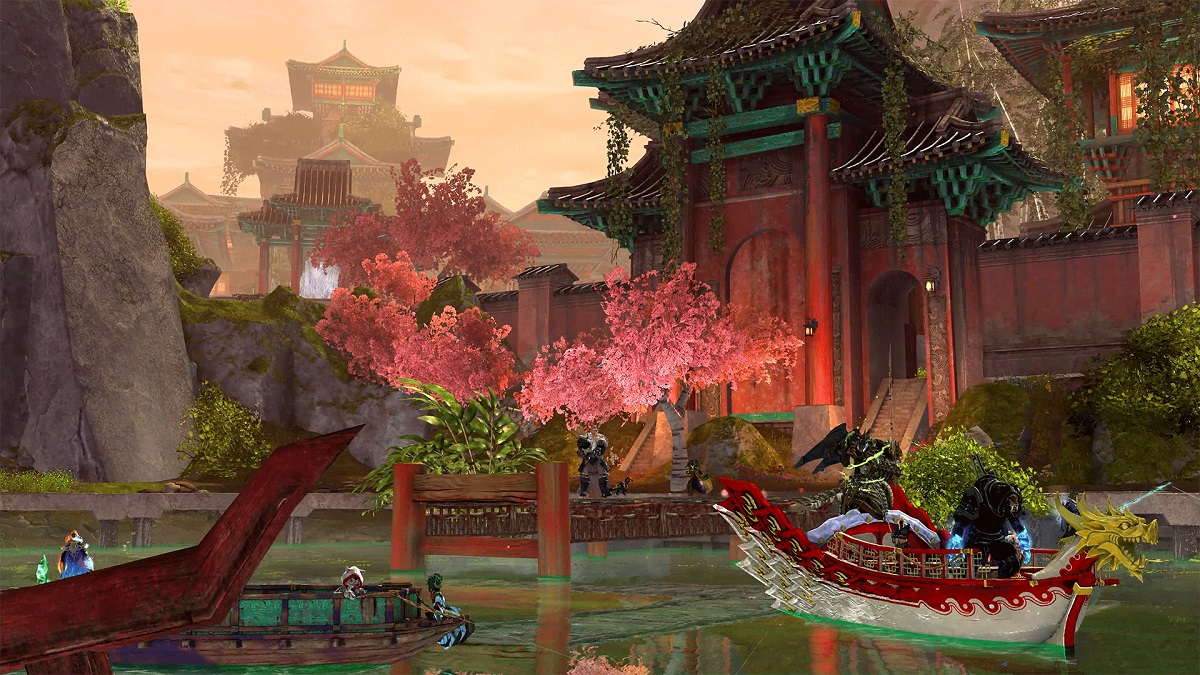 As the skiff was being piloted by one of the devs, I was able to use certain emotes that gave improvements to the speed. Fundamentally, by waving and cheering, the pilot’s stamina regenerates quicker, and speed boosts become more available. We stopped off not far from the Guild Hall and did a spot of fishing. After the anchor was dropped, I cast my line and waited to catch a fish. You click cast, and a bar appears where you have to line up a moving bar with a solid gold line on a gauge.

Of course, I was unsuccessful. However, the act of fishing is streamlined and easy for anyone to pick up. This new activity has its own Mastery Line. and can be done anywhere there is water across the main game and each expansion. It encourages group participation as players are rewarded for fishing with others. Successfully catching fish improves the entire group’s abilities.

Hero in a half shell 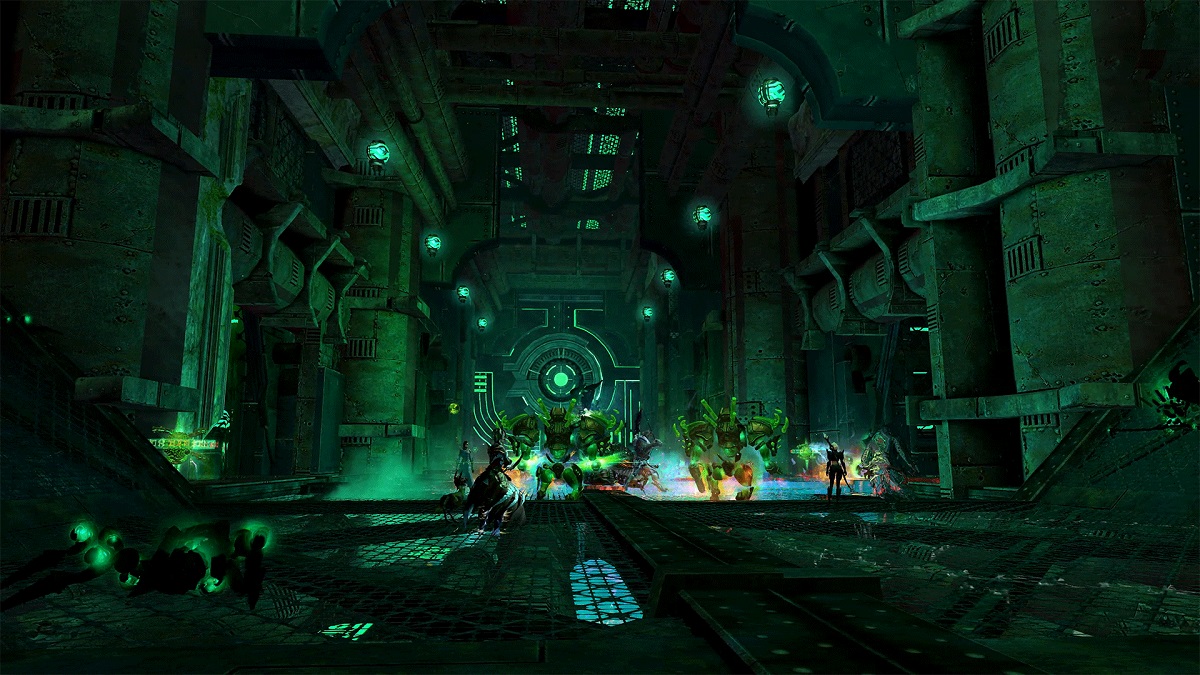 Following on from my poor effects to fish, we headed into the Echovald Wilds. During the events of the Jade Wind in Guild War Factions, it was turned to stone. While it is now turning back into its original state, the woods are spooky and dark, with plenty of creatures lurking behind every tree. Think The Blair Witch Project meets Lothlórien from The Lord of the Rings. In my short time at Echovald Wilds, I took part in the Fort Apenwood group mission. Inside the woods was the Jade Brotherhood research facility. It felt fresh, and looked like something not yet seen in Guild Wars 2. Perhaps the coolest thing during this mission was the chance to try out the brand new combat mount.

The Siege Turtle is the very first multiplayer mount ever to feature in Guild Wars 2. It has huge guns at the peak of its shell (known as Jade Tech Cannons) where one player can hop on and fire at enemies. As someone fires from the turret, another controls the turtle. It’s fairly slow, but having the ability to use boosters to fly in the air and slam down into enemies was more than cool. When the game releases, players will be able to gain access to it via an in-game quest to raise it from birth into a large scale killing machine. Much like the fishing, it can then be used throughout Tyria and across all previous content.

End of Dragons: Time for a strike 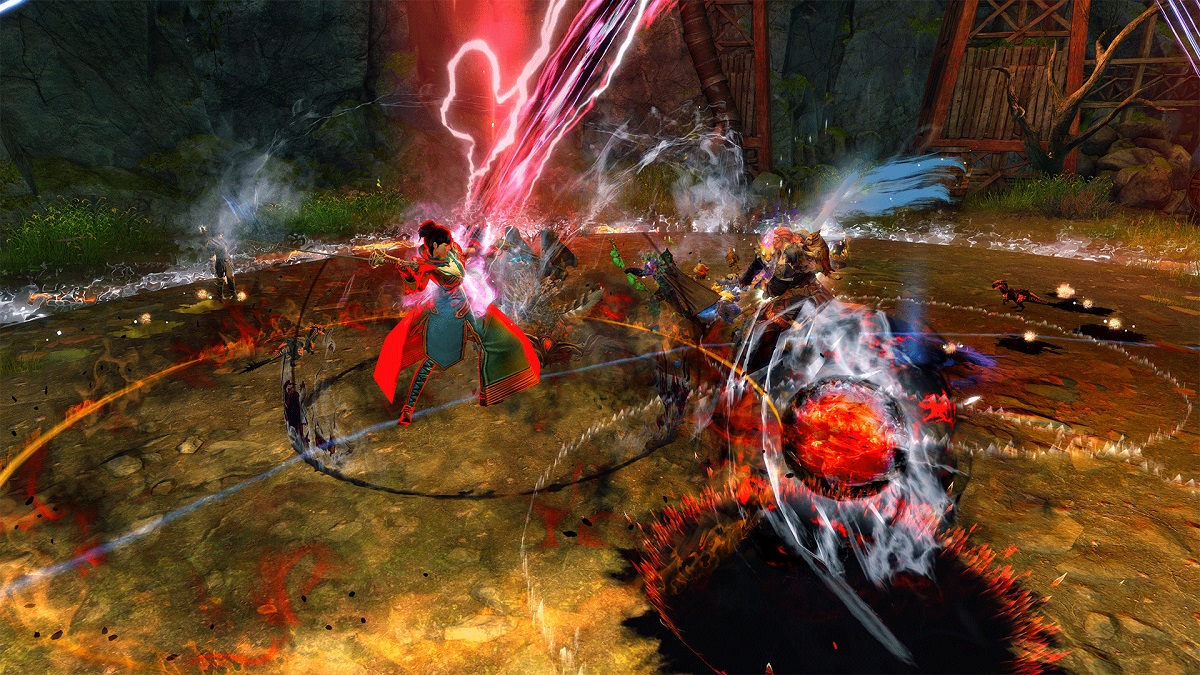 Now, I’m no expert at Guild Wars 2. in fact, when it got into the hardcore fighting elements, I died, a lot. Experienced players are going to thoroughly enjoy the challenge, and the new areas and combat features are going to be rather exhilarating. The brand new Strike Mission is another example of how experienced Guild Wars 2 players are going to have a blast. Aetherblade Hideout takes place in the Arborstone area of Echovald. Along with nine other players, we attempted to defeat a boss. It was chaotic, challenging, but tons of fun. Fans of the lore are going to lose their minds, and there’s little more I can say right now.

The End of Dragons expansion offers tons of new stuff to do. From fishing and travelling around in the skiff to taking part in the exciting Strike Missions, ArenaNet isn’t messing about. The Siege Turtle is by far the coolest thing I experienced, and the Strike Mission was a thrill a second. Guild Wars 2 still has a lot more life in it, and this expansion aims to show players why it’s sat comfortably on the throne as the current king of MMORPGs.

Video games are cool. Don't let anybody tell you any different.
MORE LIKE THIS
ArenaNetguild wars 2