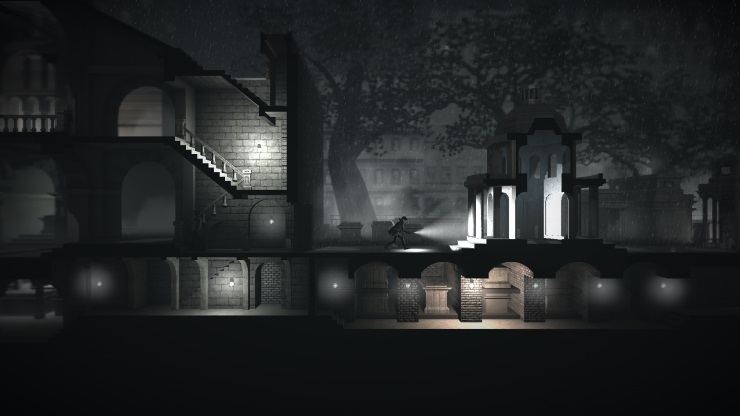 Calvino Noir is one of those games that sacrifices gameplay for its art style. Whether it means to or not, the amount of idiosyncrasies and glitches I encountered were frustrating, especially when it looks as good as it does. Put bluntly, Calvino Noir would have been a much better game if a little bit more care was put into its current-gen transition.

In it, you play as Wilt, a disillusioned detective with a dark past and a dry wit who has uncovered a plot full of mystery and intrigue. The game is drenched in noir and full of all the clichés associated with the genre, sometimes to the point of cringe-inducing. I don’t know whether the tongue-in-cheek elements are intentional or not, but some of the characters and dialogue made me crack an awkward smile. To put it into perspective, I wasn’t sure if I was watching an episode of ‘Allo ‘Allo or playing a game that was trying to be serious.

Visually, Calvino Noir provides a great representation of 1930s Europe, and its noir acknowledgements help to give it some worthwhile appeal. The rain falling heavily on the streets and rooftops, the lighting in smoky rooms, the tall and menacing buildings in the background and the hotels, factories and other dwellings you have to explore all look sensational. Occasionally there is a glimmer of yellow or cream, but the drab and dingy setting adds to the atmosphere that the genre tends to embody. The black, white and grey works as a reflection of the characters’ own personalities and beliefs, allowing you to really appreciate the effort that went in to making this game look and feel authentic. For all of the flaws, the artwork can’t be faulted. Throughout my play through of Calvino Noir, I experienced a lot of problems in gameplay, blatant flaws and niggly instances that all hindered my overall experience. Trying to climb down a ladder almost had me quit the game – a task so simple got to me more than any session in Dark Souls ever did. Hiding in a doorway or behind a wall was a monumental task in itself. The Cross button is your action button, so if you need to hide behind something it shouldn’t be so difficult. The amount of times I got shot because the game wouldn’t let me hide was ridiculous, even though the option to do so was there.

As a result of these problems, you will die a substantial amount of times. Not because you are particularly bad at the game, but because the game doesn’t seem to want you to progress. The only option you have to fight back is to choke out the enemy (almost identical to the CQC featured in Metal Gear Solid) and that can be annoying too. The first time I encountered an enemy, a fist icon appeared so I thought I’d be throwing a punch or two. Nope, you need to sneak up behind them to throttle them senseless. There are no guns at all, so you’ll never get the option to take out the enemy with a bullet or two. For a detective encountering plenty of resistance, the absence of a gun seems completely ridiculous. Yes, it is a stealth game, but there were many instances where a handgun could have solved my problems and helped keep my annoyance levels down. Each person you control has different abilities so they need to stick together at all times. Pressing the circle button helps to keep the characters together and essentially sync their movements. Unfortunately, this is yet another element of Calvino Noir that doesn’t work. If you are running up some stairs or moving a little faster than normal, the sync seems to stop and you can leave your friends behind. It is much easier to go it alone, but most of the clues and objectives require all three of you to be there to look at them so you’ll have to make three separate journeys to get to the places you need to be.

When one of your partners gets shot, you head straight back to the last checkpoint you reached. This is a normal feature in video games, but the way in which it cuts with such a messy transition can be confusing, especially as the game continues for a few seconds after one of you gets shot. Much like a chicken that loses its head, you can carry on for a short time before it rips you out of the action suddenly and coarsely. On respawning, I even ended up in an area I’d not visited yet where both doors in the room were locked. Such little details could have quite easily been sorted before the game was released. Calvino Noir is bugged quite heavily too. For example, I spent well over 30 minutes trying to operate a crane. All I needed to do was pick up some metal canisters and drop them on a boat, but the crane kept moving back on its own accord, and when I finally picked up the canisters, the wire appeared detached and vibrated frantically causing me to turn off the game and restart from a previous checkpoint. Another one of the bugs reared its ugly head when I was trying to make use of one of the main stealth elements in the game. When hiding behind some of the archways, I was at least of foot away and clearly visible which resulted in more deaths and more ugly respawns because the enemy spotted me from a mile off.

Calvino Noir could have been something so much more; there is just as much mystery and subterfuge in its story as there is in its gameplay and mechanics. I can’t help but feel this game should have remained on the iPhone; the move to current-gen just doesn’t work for me and I was left unimpressed with no need to return.

Unpolished respawning.
Control system is unclear and flawed.
Some of the bugs are game breaking.