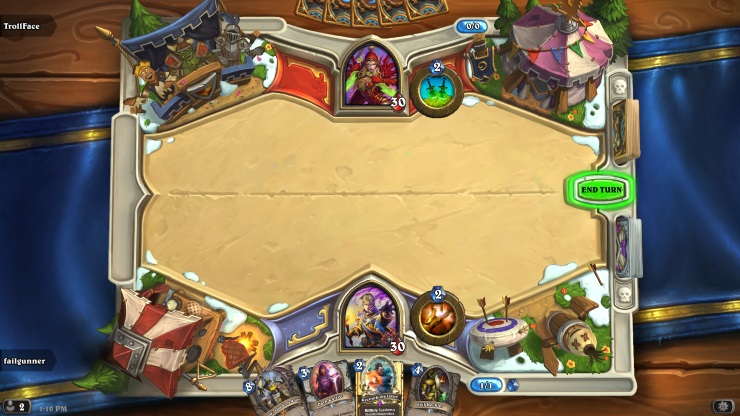 Hearthstone is now part of my daily routine. With each expansion, be it in card form or in adventure form, Blizzard has been making Hearthstone more fun and trying to slowly balance which decks become too overpowered. The Grand Tournament brings with it some really nice tweaks to the base game. I’ve been really enjoying making decks with the new cards and tweaking old ones.

Hearthstone expansions thus far have introduced new mechanics in the form of card types only. Goblins Vs Gnomes introduced the Mech type and some old favourites from the classic set like Harvest Golem became Mechs. This enabled Mech decks, and Mech Mage is still a very popular (and annoying) deck in the current meta. Blackrock Mountain added more dragons and dragon decks became a thing. The Grand Tournament changes things up by introducing new core mechanics and building upon the hero power mechanic. There is also a new playing board, which is really great. Joust and Inspire are the new mechanics introduced in The Grand Tournament. Inspire cards will perform certain actions (specified on card text) when you use your hero power. The Jousting mechanic is the most interesting thing Blizzard has done to Hearthstone because it works on the principle of revealing a minion card from each deck. If the card in your deck has a higher value, you win the joust. This victory could result in you drawing a card, a minion gaining taunt, and various other things. What surprised me the most about The Grand Tournament cards was how fast some of them made their way into the competitive decks used on Ranked ladder and in Hearthstone tournaments. Usually new cards coming in means a few people try out fun decks but everyone else sticks to whatever they see on streams or on Hearthstone deck tracking websites. This time I see almost every opponent use new cards and new decks on Ranked and Casual mode.

It isn’t fair to just talk about content in a patch because Blizzard finally added some stuff people have wanted since Hearthstone launched. Ranked play now rewards you with a chest as well as a card back once you reach rank 20, and the chest contents improve with every 5 ranks you advance. This chest will be rewarded at the beginning of the next season as with the card pack. Hearthstone has been facing a serious issue for some time now. New players get overwhelmed with the amount of things they need to do to catch up with veterans. We now have multiple expansions new players have to complete and purchase with either gold or real money to get some very important cards. It almost feels like an MMO without a level boost (or card pack boost, in this case).

After losing some faith in Hearthstone and Blizzard thanks to the poor voice acting for paid hero portraits that felt lazy overall, The Grand Tournament reminds me why I love their games in the first place. Before new players consider jumping on this set of cards, I recommend finishing both solo adventure expansions and crafting a few cards from the Goblins vs Gnomes expansion to be completely set for the ladder. I just hope Blizzard is considering either making some of the older expansions free, or rewarding more packs to newcomers, because I can’t see how the game will go on if new players quit on it. I’m excited to see what else Blizzard brings to Hearthstone in the coming months.

Many great new cards.
Voice acting for new minions.
New board is great.

The RNG aspect will annoy some.
Barrier of entry is getting higher.