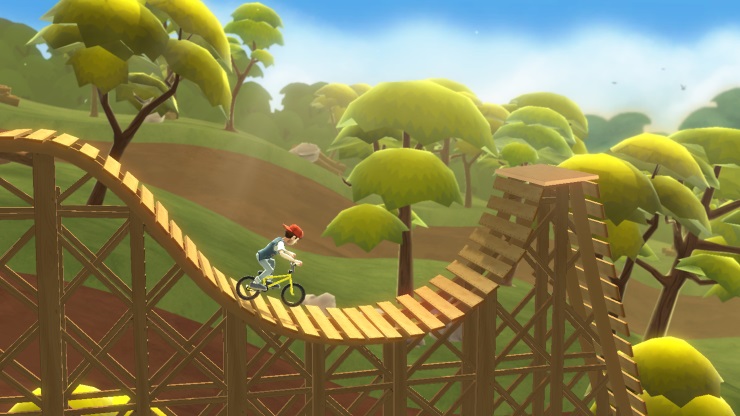 To me, stunt riding games have always seemed more at home on mobile devices or handhelds. It’s not a question of quality or content, but simplicity. Even the excellent Trials Fusion seems almost custom built for killing time on a commute. As a result, it always seems a bit weird when previously mobile-only stunt games come to home consoles, even if they do get a lick of paint and a content-dump in the process.

Pumped BMX+ is a prime example of this. Previously designed as a mobile game, its simple, uncluttered gameplay is pure score-chasing fun, now transported to the Xbox One with graphical and performance boosts and burst of new content. It’s a welcome arrival, don’t get me wrong, but when I first started playing it I was wondering how many people would choose to pay for something so basic on a next-gen console. After about forty-five minutes I stopped asking myself such stupid questions, and realised I hadn’t blinked for almost an hour.

Like many games of its ilk, Pumped BMX is dead straightforward and hugely moreish. Holding down A will accelerate your little BMXer, and releasing it as you crest a ramp will give you a boost of air. Once sky-bound, the right stick and both bumpers will perform tricks. Chain tricks with grinds, wheelies and jumps increases the score multiplier, and your obvious goal is to score as much as possible. Poor timing and/or judgement will see your rider come crashing to the ground in painful ways, made even more comical and occasionally wince-inducing by the ragdoll physics and your rider’s relentless dead-eyed smile. Seeing him hurtle into a wall face-first and drop to the ground, lifeless, still, and SMILING, is just a little bit creepy.

Performing tricks couldn’t be simpler, but there is a definite are to maximising your airtime and learning which tricks transition best. For the longest time I simply turned the sticks randomly and held down a bumper, grinning as my score climbed. After a while I started to realise that by taking my time to perfect a transition here and there, I could score higher. Of course, sometimes there’s a cathartic kind of thrill to spamming whatever you can before you hit the floor again, but that’s a question of preference. The levels range from quaint, summery woodland to frozen, snow-draped hills, but neither the weather not location has any bearing on what you’re doing, how you perform or indeed whatever your rider is wearing. Each stage comes with three difficulty levels, specified by the challenges offered, and completing all the challenges in one difficulty automatically unlocks the next level.

Aesthetically, Pumped BMX+ is bright and cartoony, almost charming. Sadly, the soundtrack is maddeningly irritating as the same handful of tracks loop over and over again. There’s no commentary or voice-acting, although little banners drop down in response to your actions either with words of encouragement, praise or hashtagged insults. There’s definitely a sense of humour in Pumped BMX+ that adds a sense of personality to the fun. If you’re after a quick burst of fun, Pumped BMX+ delivers, but there’s nothing overly exciting going on beyond the straightforward thrill of chasing your high scores.

Not a great deal of variety.
Irritating soundtrack.
Nothing innovative.

As stunt games go, Pumped BMX+ is solid fun if a little light on variety. There's enough challenge here to keep you busy for a while, but it doesn't compare to the likes of Trials or Olli Olli in terms of addictive thrills.