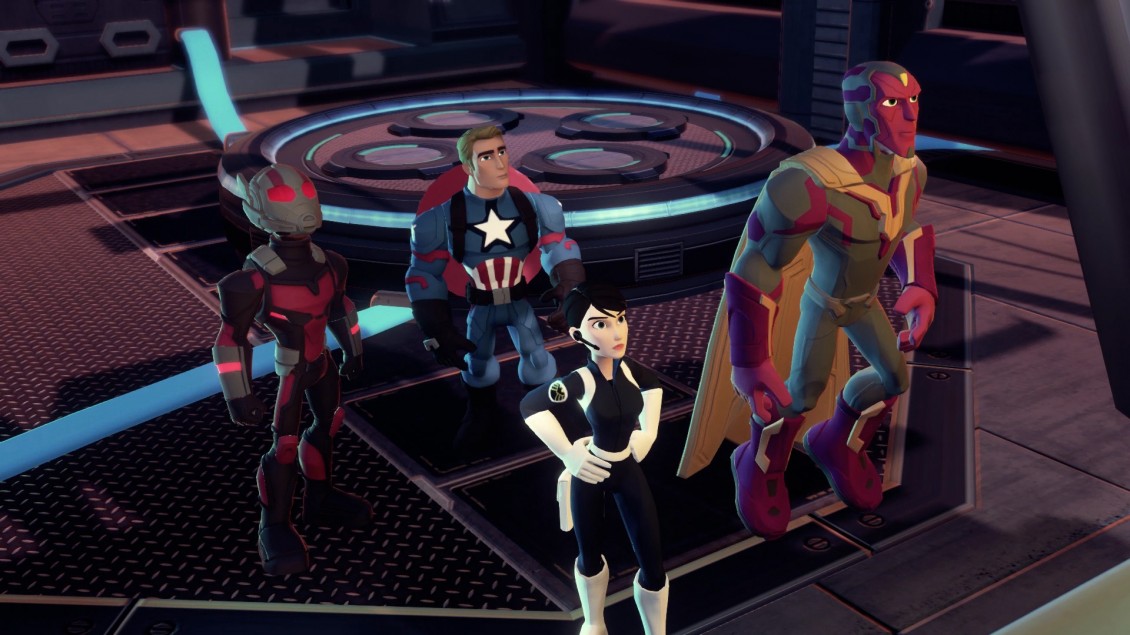 It’s hardly surprising that with Captain America: Civil War only weeks away, Disney have decided to go for a piece of the Superhero versus Superhero pie with Infinity 3.0’s latest Playset.

Marvel Battlegrounds is essentially a simplistic four player arena fighter that pits your favourite Marvel superheroes against robotic versions of themselves that are infiltrating Shield for reasons best known to villain Ultron. It’s something to do with stealing Vibranium and trying to frame Loki for it, but the paltry four mission story doesn’t do much to explain anyone’s motives.

But then, it doesn’t really need to. The whole purpose of Marvel Battlegrounds is to let you beat the snot out of your collection of Marvel characters in a variety of arenas. You can use any Disney Infinity Marvel character from 2.0 or 3.0, and each one has their own moveset including an aerial attack, a ranged attack, and a unique special ability activated by hitting R1 when you’ve collected enough purple sparks to fill your meter.

Level-specific hazards play a part, too, whether we’re talking about boxes and crates to through at your opponent or trap switches you can hit to electrify the floor or call in the Milano for an aerial bombardment. Now and then a Power Disc icon will drop in, which you must hold onto until the circular gauge is full, at which point you call in a random hero to help you. The Winter Soldier will snipe your opponents, for example, or Iron Patriot will fly over the battlefield and bomb them.

Certain characters are more fun than others. Captain America’s shield throw never gets boring, ringing with that trademark Vibranium ting every time you hurl it, while Iron Man and characters like him can fly. Even with the short story mode, there’s replayability thanks to 28 Challenge missions with various criteria, but you’ll have more fun playing with the kids in the Versus Mode, trying out all the characters.

Disney may have missed a trick not allowing for “team-up” moments, as so many of the characters have skills that would complement each other. With no lock on it can also become horribly messy at times, but there’s little there to tax you unless you artificially enhance the difficulty, at which point the enemy’s blocking and skill use becomes irritatingly on-point. There’s little point looking for a challenge here, though, it’s really all just about having a laugh. The new Captain America figure included with the Playset is fantastic, based on the MCU-version of everyone’s favourite super-soldier. There’s no disparity in strength between characters, which is weird when Black Widow is picking up Hulkbuster Iron Man and throwing him around like a ragdoll, but it’s something you can overlook for the sake of the fun.

Sadly, the environments are a little bland, and despite the incredible variety of options in Toy Box Mode, there are no options to build your own arenas. While it’s nice that each character has a unique ability, the actual level of variety on offer is fairly low. One arena is more or less the same as the other, while aside the aforementioned special moves, every character does more or less the same thing. For a game that sells itself on limitless possibilities, 3.0 doesn’t do enough with the Battlegrounds Playset. Luckily, it’s all good, clean, wholesome Disney fun anyway.

Playset and figures provided by Disney.

Can use all your Marvel characters right away.
Captain America figurine is awesome.
Challenge missions add longevity.

Story Mode can be finished in half an hour.
Combat is a little messy and imprecise.
Not a lot of variety.

A decent Playset that actually does something different to the established 3.0 formula, Marvel Battlegrounds suffers from a lack of variety and fresh ideas.