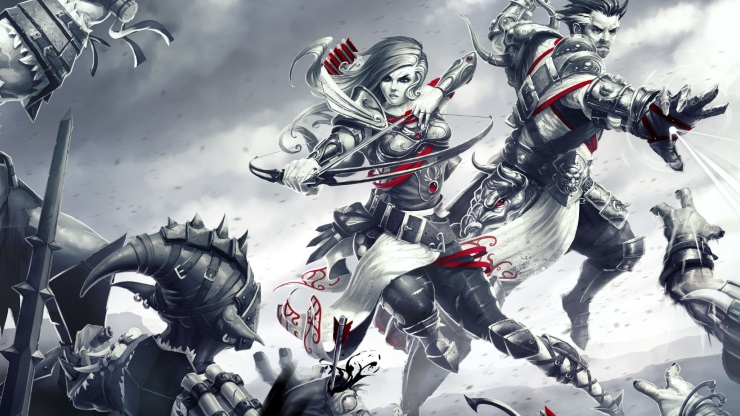 It would appear that deep, complex tactical RPGs are something like busses. You wait forever to see one on PS4, and then rather inexplicably, two turn up at once. A few weeks ago InXile’s incredible Wasteland 2 hit consoles with the Director’s Cut edition, and this week we’ve got Divinity: Original Sin, a huge fantasy adventure from Larian Studios to sink our teeth into.

While not an obvious choice for a console port, Larian have done a great job re-purposing their sprawling dungeon-crawler to fit consoles, not least in re-mapping a keyboard interface onto the controller in a way that feels intuitive for the most part. It can seem a little fiddly at first, but once you know your way around, it’s a refreshingly uncluttered menu system.

Divinity is set in a world where a dangerous strain of magic called the Source must be sought-out and eradicated by elite warriors called Source Hunters. The narrative follows your duo of Hunters and their various companions as they attempt to thwart the nefarious plans of a cult of Sorcerers called the Immaculates. It’s pretty standard action-RPG fare, never really straying from established tropes and rarely thinking outside of the box. Elves and orcs and magic and swords are commonplace in fantasy adventure games and Divinity: Original Sin has no intention of rocking any boats. To be fair, it doesn’t need to. One thing it does better than most is character generation. While it doesn’t boast the most robust creator in terms of appearances, Divinity has a dizzying amount of variety when it comes to classes, skills, and specialisations. You begin with two characters who can be either male or female. You get to name them and decide on their looks, before selecting a class from twelve archetypes (including Inquisitor, a magic-based class new to the Enhanced Edition) such as Fighter, Rogue, Ranger, Knight, Witch, and Cleric. You can then adjust starting stats and abilities to further mold them to your play-style. It’s important to create two characters who compliment each other, such as one ranged and one melee, or a sneaky backstabber and a powerful magician, but really it’s up to you, and you can recruit two other party members from a varied selection you’ll meet in the field.

The plot kicks off with you investigating a murder in the city of Cyseal, but as is par for the course, Original Sin hurls quests as you with gleeful abandon. The system is slightly odd, though, as a high percentage are multi-part missions that take several hours to see through, many of them branching into other quests at various tangents. Frustratingly, you can’t simply opt to track specific quests, and they’re all displayed on the minimap once you have a location for them. If you have no location, you’re stuck going door to door to find the answers you need. It’s infuriating, and can make even simple tasks a bit of a chore. Freedom is a cornerstone of design in Divinity, though, and there’s rarely only one way to tackle a problem. Most locks can be picked, most doors can be bashed down, or there’s always talking if that’s your style. Charisma Pet Pal will persuade people and animals to open up, respectively, while a high Perception may reveal hidden secrets in the environment. Holding down X will search your immediate area for lootable containers or stashed goodies, and it’s rare to enter a new area and find nothing worth pilfering. There’s a massive amount of armour and weapon combinations, and more skills than you can wave a wand at. Incidentally, wands are a new weapon class in the Enhanced Edition, allowing for quickfire casting from the skill bar. They work pretty similar to scrolls and spells, only they don’t run out and there’s usually no cooldown.

You can assign up to thirty actions on the skillbar, from simple attacking and fleeing to using potions, grenades, antidotes, special abilities and spells. Characters can learn the base level of most spells as long as they have a point in the umbrella ability (Man-at-Arms for melee skills, Scoundrel for rogue skills, Pyromancy for fire magic, etc), allowing you to build whichever party you choose. But be warned, you level up slowly in Divinity, and you won’t be picking up skill and ability points at a rate of knots. Instead, you can buy skill books from vendors to learn new abilities. The barter system is unique in that almost everyone can be traded with, and sometimes the most unlikely characters will have some really cool stuff in their inventory. Likewise, foraging for herbs and materials, crafting tools and empty potion bottles and then experimenting with the Combine function can yield significant results.

Outside the deep crafting and gathering systems, combat is where Divinity: Original Sin shines brightest. It’s not easy, and will repeatedly remind you of the importance of regular quick-saves, but the combat is excellent. Turn-based, everything you do costs Action Points, of which you have a limited pool decided by stats, gear and character build. Ranged and melee classes have a variety of Stances they can drop into to bolster different attributes, while the amount of spells on offer for casters is dizzying. While that’s all tactical enough, the real fun comes from using the environment. You can ignite oil or gas, freeze or electrify water, either with spells or bombs. You can even carry candles, ignite them during a fight and throw them at explosive barrels or puddle of oil to damage your enemies. Combat is unforgiving, but a little preparation and imagination will carry you a long way. You can always team up with friends if the going gets too tough. Original Sin allows for full story, drop-in, drop-out co-op, and the dynamic split screen means you can literally go and do two things at once – you can even divvy up the party, and magic pockets allow you to send gear between each other. It’s playable locally, too, which is becoming rarer. Co-op in itself is common enough in RPGs, but the dynamic split-screen is a masterstroke. It’s simple to initiate, too, though it’s not always wise to spread your party too thin.

The Enhanced Edition comes with 80,000 lines of spoken dialogue, most of it very well-delivered. Because of this, there’s a vein of black comedy running through Original Sin that often had me chuckling. The musical score is excellent, too, which does wonders for the atmosphere. Character models are bright and highly detailed, while the world is colourful and vibrant, closer in style to Torchlight than Diablo. It’s an engaging and inviting world, only really hamstrung by its unwillingness to hold your hand or offer real guidance.

Thanks to the release of Wasteland 2, Divinity: Original Sin is not quite unique on PS4, but not much comes close. A sprawling, exciting adventure that makes you work for your rewards, Larian’s tactical RPG has tonnes to offer fans of the genre, though newcomers may struggle to get to grips with its more complex systems.

So much freedom.
Full story co-op.
Deep, tactical and smart.

Maybe too much freedom.
Needs better quest tracking.
Can be extremely fiddly at first.

Divinity: Original Sin is a massively complex PC title skilfully repurposed for console gamepads. It's deep, compelling, and fun, but not for the casual crowd.

You may also like
divinity: original sin enhanced edition