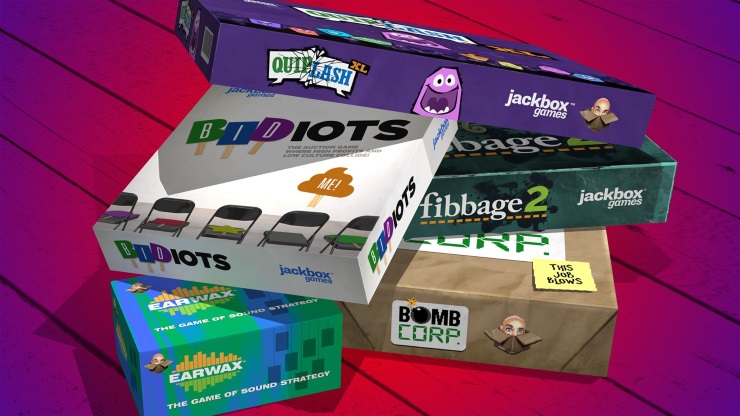 I gave the original Jackbox Party Pack a perfect ten and the standalone follow-up Quiplash a nine. It’s safe to say then that I was very excited for this sequel and the collection of games it would be bringing to my TV. While there are three new titles in the box however, the best offerings are re-hashes of what has come before. As before, all the games are controlled by using the browser of a smart device to link into your game using a unique room code, a system that works absolutely brilliantly.

Quiplash XL is exactly what you would expect. A game for three to eight players, each player gives the best – normally funniest, but sometimes smartest – answer to a couple of quips, each of which has also been given to one other player. Then you all go through and pick one answer for each quip, with points split depending on the percentage. If you’ve somehow tired of all the quips in the base Quiplash game (which are included here alongside news ones), or never owned it in the first place, then this is probably the best in the box. Second best is Fibbage 2, which, as you may have guessed, is a sequel to the Fibbage game found in the first Jackbox. A lying-based game, Fibbage has every player write a convincing lie to complete a sentence, then has you try to find the right answer amongst all the bluffs. Luckily, the devs clearly know their audience, so the right answer keeps pace with ridiculous lies players come up with. New for this version is the Defibrillator, which each player can use once per game to narrow down there answers to two: the correct one and a lie. Again, Fibbage 2 is nothing you haven’t seen before from Jackbox, but if you have exhausted all the questions in the first game, you’ll find plenty more here.

While they be the best two in the collection, that doesn’t mean fun can’t be had with the rest. New title Bidiots follows in the tracks of Drawful. Giving you a couple of phrases or items to draw, it then puts each image up for auction. Each player is given $3000 starting cash, and a couple of the descriptions other players have drawn too, and a max price for said item. Using this, they must first guess if each piece of artwork is what they are looking for – a challenge in itself – then outbid other players also going for a piece. Win, and you get the actual value of said piece at the end of the game, while the artist receives half what you paid for it. It’s fun and surprisingly tactical, although not as easy to pick up and play as the other titles in the box. Soundbite title Earwax is less successful however. Assigning one player as the judge, the rest must pick two noises from a small selection to create the best approximation of an action, eating soup for example. It’s funny at first, but you are entirely beholden to the sounds you’re given to choose from, meaning most answers are simply random. Playing a game with the maximum amount of players (it’s three to eight) also saw us go through the available sounds pretty quickly.

Bomb Corp rounds out the package, and it’s a strange one. For up to four people, it divides a series of clues on how to defuse a bomb amongst the players, and has you work together to cut the right wires in the correct order. Wrapped up in a weird little story, it’s amusing at first, but it quickly becomes frustrating, as a bomb going off resets you to the start of that day. It’s made up of five or so puzzles that can be a decent chunk of time lost, and while the puzzles you’ll repeat are slightly different each time, the unskippable dialogue between them isn’t. That only two games – Fibbage and Bomb Corp – are playable with less than three people reduces the value for those who don’t regularly get a larger group together, although the inclusion of Quiplash’s audience mode – where people watching the game can vote on answers to provide bonus points – in some titles, alongside a streaming mode that increases the time given to answer questions, dramatically counters this in the opposite direction. Naturally the whole package is presented incredibly well though, with its gameshow style delivery (Bomb Corps’ story-led pixel art is the only exception).

Overall then, Jackbox 2 is not as great a proposition as the original collection was, but that by no means makes it a bad choice of party game. If you’ve never played Jackbox before go for the original, but if you’ve tired of its games and finished all the Fibbage questions, then the new ones here, along with an expanded Quiplash, the excellent Bidiots and the diversions of Bomb Corp and Earwax, will provide hours of fun.

Review code provided by publisher. Xbox One version also tested.
Liked it? Take a second to support GodisaGeek.com on Patreon!

More Fibbage and Quiplash.
New game Bidiots is great.
The inclusion of a streaming mode.

Bomb Corp and Earwax fall a little flat.
Best bits have been done before.

More Fibbage, more Quiplash. Do you need anything else?

You may also like
Jackbox GamesThe Jackbox Party Pack 2PC