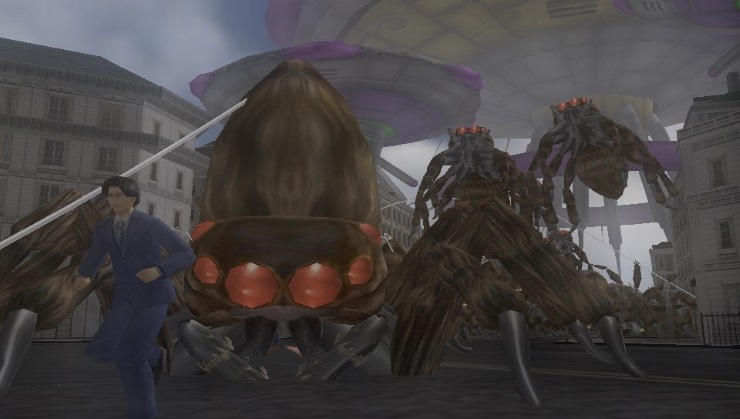 The Earth Defense Force franchise is something I’ve been reading about online for a long time. I see it mentioned fairly often when people talk about fun core gameplay but never had the chance to try it myself. Invaders from Planet Space is the first game in the franchise that I have played, and boy do I regret not getting into this franchise earlier, because this is a great game that does not take itself seriously. There’s a b-movie style charm whilst maintaining a sense of fun throughout.

Launching a new game will take you to a slideshow with captions about how Earth is under threat and EDF HQ has been notified that giant creatures have invaded London. Following this, you get thrown into the main menu for your save file and need to spend a fair bit of time understanding how it all works. I say this because I was pretty confused initially, and ended up reading the in-game manual to get accustomed to some of the controls and mechanics.

When you decide on a class and weapon initially, you deploy your character into missions. There are more than 70 missions to go through on multiple difficulty settings with three classes if you want to get everything out of EDF 2. Each mission involves either clearing waves of enemies or destroying certain enemies, and exploring areas to find more information. Enemies drop armour, weapons, or health at random as well.

The amount of content on offers is impressive, though I was initially concerned about the controls, as things get more hectic a few missions in. Thankfully it plays well throughout and feels at home on the Vita. The mission structure allows for fun bite sized gameplay chunks.

While it goes for a b-movie style aesthetic (complete with cheesy voice acting), the visuals look really dated. Final Fantasy Type 0 HD has a similar dated look thanks to it being a PSP remaster, and this has that kind of old look to it, too. One of the annoyances is regarding mission failure. If you throw a grenade or shoot a plasma rifle into a wall nearby and die, there’s a delay in the game detecting that you failed the mission. Another issue is how vague some of the instructions are early on for people unfamiliar with the franchise.

But I’m really happy with Earth Defense Force 2 on Vita. I can’t wait to get back and replay the missions with another set of weapons on a higher difficulty. I feel like this is going to be in my Vita for a long time. If you’ve ever wanted to check out the franchise or just want a fun game on Vita, this one comes highly recommended, and I’m glad that games like this still exist. Just don’t go expecting a deep or meaningful story, check your brain at the door, and look past the dated visuals, because then you’ll have a lot of fun.

Visuals will be a turnoff for some.
Vague instructions, initially.

Fun gameplay that reminds me why I enjoy playing video games in the first place.

You may also like
Earth Defense Force 2: Invaders from Planet SpaceXSEED

7 Popular Disney Xbox Games That You Must Play!

How to Secure Public Key Cryptography?