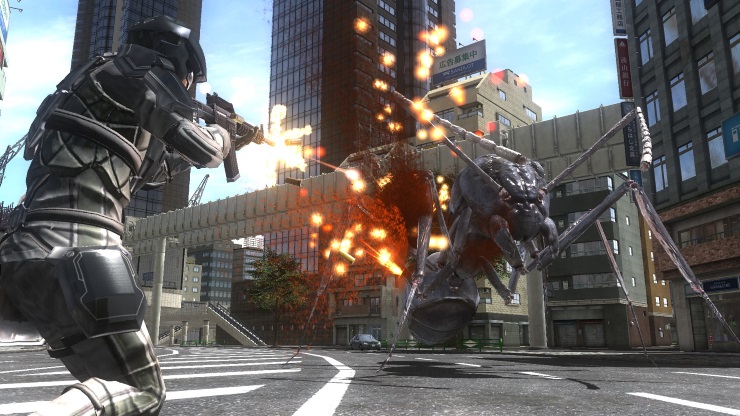 The Earth Defence Force series has always been a bit janky. It sidles around like a big drunken bug on the edge of a bathtub, legs flailing, scattering the shampoo and shower gel and waking up the house. Arguably this is part of its charm, but occasionally such charm can be double-edged, like when your child makes an accidentally hilarious joke and you laugh, so they keep telling similar jokes that are increasingly unfunny, and eventually you’re just nodding and grimacing.

If you’ve never played one before, the mind-boggling premise is that the Earth is being overrun by huge insects, and only an elite fighting force of gung-ho marines can save humanity. It’s all nonsense, of course, and is nothing but an excuse to shoot hundreds and hundreds of giant monsters in the face with rockets.

While they’ve always been undeniably entertaining, they’re also unashamedly brainless and incredibly repetitive, and this latest entry (an updated, expanded version of last gen’s EDF 2025) is no exception. The issue of course is that now it’s on the PS4, a machine capable of delivering The Witcher 3, Fallout 4, and Batman: Arkham Knight. As such, that clumsy charm just isn’t enough to cut it with anyone but hardened established fans anymore. Each mission sees you taking the role of one of four elite soldiers, equipping a loadout from a powerful and diverse arsenal, and then deploying into a horribly barren environment to shoot bugs until your fingers bleed. The graphics are hideous, and wouldn’t look out of place in the early days of the PS3, or maybe even the latter days of the PS2. But there’s a certain amount of fun to be had running and gunning through levels, responding to enemy reinforcements with extreme prejudice. You have a squad who will respond to simple commands, but ultimately you’re on your own while the AI runs around like idiots and giant bugs crawl all over the city without so much as putting a brick out of place here and there.

It’s possible to bring buildings down, but it seems almost random as I pelted them with rockets to no effect until they would come down apparently on their own. On two occasions, a building would glitch, whole, through the ground. Whether any of it was intentional or not I couldn’t be sure, but by then I had resigned myself to what The Shadow of New Despair is: mindless, unpolished, frenetic fun.

The different classes do bring something new to the gameplay, however. The “Fencer”, for example, is an armoured battle suit that turns your soldier into a walking tank, while the “Wing Diver” class can fly for short periods, but is structurally weaker. Later, the enemy types and vehicles deliver a much more diverse experience, even allowing you to pilot an enormous mech to fight an even more enormous monster. It’s bonkers, yes, and just as technically broken as everything else, but it somehow manages to be great fun in small doses. Though, with almost 200 missions both online and off, small doses isn’t something EDF 4.1 is interested in delivering. Facing off against mutated alien ants, spiders, hornets and, for some reason, dragons, with tanks (which drive fairly well, surprisingly), a spider-mech that can climb buildings, and the aforementioned skyscraper-sized robot, the Balaam, is never less than silly fun, but neither is it any more than that. Indeed, by the time you’re several hours in you’ll find the repetitious action is balanced somewhat by the variety of enemies and encounters, both in appearance and scale. The online mode is also a great way to diversify the fun, though it does nothing to improve the technical issues.

The gameplay itself might well be enjoyable enough, but endlessly looping sound bytes and ugly, featureless environments mar that at every turn. Whether or not you can enjoy EDF 4.1 will come down to how much you care about things like graphical fidelity and technical competence. If you can switch off the inner critic and have fun, there’s an awful lot to be had, but the fact that EDF is nowhere near the standard of current-gen video games is undeniable. It’s entertaining, yes, but ultimately it’s going to turn off as many people as it will turn on, and it could be so much more.

Cathartic fun.
Huge variety of enemies and weaponry.
So many missions.

Ugly and technically inept.
Action is repetitive.
Doesn't add much to the series.

A brainless shooter that manages to be fun despite poor aesthetics and a host of technical issues.

You may also like
Earth Defense Force 4.1: The Shadow of New DespairMarvelous

Earth Defense Force 4.1 heads to Steam in a few days