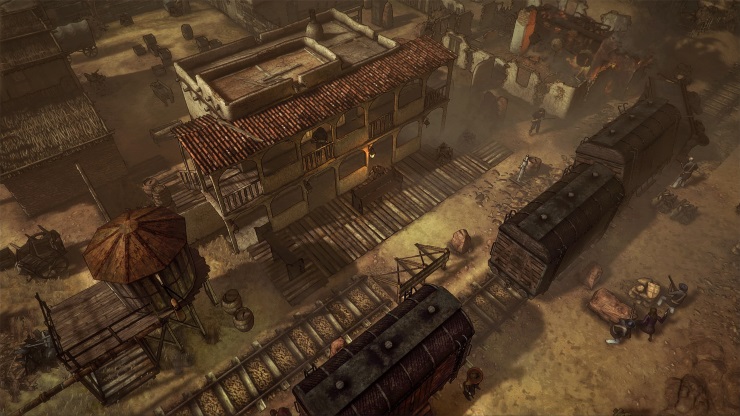 Your sweetheart is locked away in a cell and her captors are spread heavily across the compound – they know you’re coming. Their guns are cocked, their posts are manned, and their tempers flare like the rays of the bastard sun. As they wait for a twig to break under your boots or a signal of any kind, you scope out their hideout – looking for the best entry point and exit point, how many of the enemies are lurking around, blind spots, coverage and vantage points. You are out for revenge; you may not find it here, but wiping out this cartel and rescuing the woman you love will help you somehow, even if their deaths are just the start. Blood will be shed, survival will be earned, hearts will be broken and the devil will wish you well. This is Hard West. This is the end of the beginning.

This is a game that makes you work for your rewards and tries its damnedest to make you fail. As you follow your manifest destiny across the US in a variety of different story-based missions, you’ll come up against drug lords, psychopathic bandits, and hell itself, all pushing you to your absolute limit. Don’t get me wrong, the difficulty is a monumental challenge and it can be frustrating, especially when you get stuck in the same battle for a good hour, but when you plan your attack to the last detail and succeed, there is no greater feeling. XCOM is a good reference point for how it plays, but Hard West stands alone and offers you a great deal of choice in combat. Each player in your team has action points which you can use for moving across the fight area, firing off a round deep into your enemy, reloading your gun, transfusing some blood and more. Being a turn-based strategy game, it is important to always be two steps ahead, but there are some nice touches in the game that give you an edge on the fight. Luck is part of your arsenal, and with every shot the enemy makes, there’s a possibility it will miss you. If your luck prevails, you’ll live to fight another day and your luck level will diminish; however, it will go back up with every future turn, meaning there is a risk in every decision you make.

There are ability cards that can be unlocked by doing certain missions or making the right choices in your story and they help to give you the upper hand in battle. The Ace of Clubs (for example) will make sure your opponent’s luck doesn’t replenish when they make a shot, and nearby enemies will lose luck in the process. There are plenty of cards which you’ll find along the way and they can be split across your team, allowing you to customise your setup for maximum efficiency. You can customise your loadout too, making sure you have a strong selection of guns and equipment for the ensuing fight. Logically, you’re going to need a variety of guns with different attributes that will help you at short and long range. If you’re within feet of an enemy, using that sawed-off shotgun to blow them away will result in ultimate death, but taking out an enemy from a good distance isn’t going to work – it’s all about the variables.

That’s what makes the combat so satisfying, too. With each decision you make comes a ton of variables for you to consider. The distance, the material of the cover they’re behind, the weather – they’re all taken into account. If Swingin’ Billy is crouched behind a big rock in the rain, over twenty feet away, then you’re likely to have a 24% chance to kill or wound them, but if there is nothing between the two of you and it’s sunny, that may change to 90%. You have to be smart, alert, and not too gung-ho because the AI is excellent, frustratingly so at times. Between its gunfights lies a clever map screen that offers you choose-your-own adventure text-based missions. It helps to break up the intensity of battle, even if they are vague at times. You’ll head into unstable mines and interact with dodgy characters that you have to trust with only a few lines of dialogue to base your decision on. You can also gain money and cards from these missions, so it’s always worth paying attention and not skipping through just to get to the next shootout.

The voice work is spectacular in Hard West, and the story is really brought to life by the husky tones of the narrator. Although there is a supernatural aspect to the game, at its centre is a tribute to the good ol’ Wild West. The acting and tone is more reminiscent to films like The Proposition, but the spaghetti western genre is acknowledged in the various tropes that pop up from time to time; the all-out fun of pinging bullets across tables, carriages and bars is greatly appreciated. You never really have long enough with the characters to feel connected, but it doesn’t particularly matter. It wants you to play, learn, and enjoy as opposed to connect with it on a personal level and that’s OK. Join the trail and cock your pistol because Hard West is great.

Story arcs feel a little rushed.
Will have you tearing your hair out quite a bit.

Hard West is a turn-based strategy game that gives you an authentic western experience whilst pushing you to the limits of your ability.