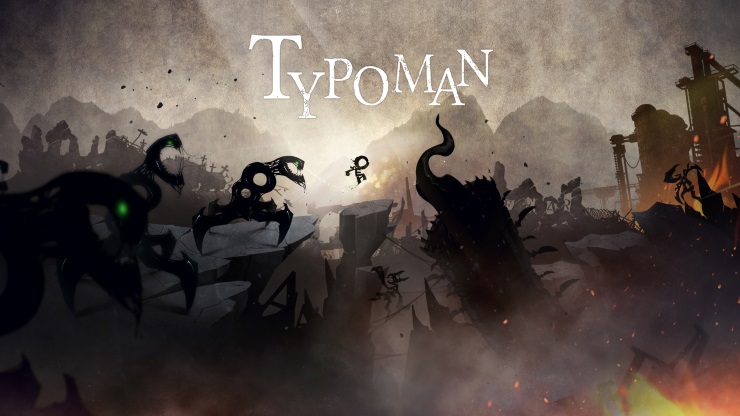 The written word is truly a beautiful thing. If it wasn’t, you wouldn’t be reading this right now. It can be a medium for communication, the subject of puzzles, and now, the basis for a game. Typoman employs the sort of clever puzzle-platforming you’ve seen in games like Braid and Limbo, only this time the wordplay is the central mechanic. It’s like Scrabble, only slightly less miserable.

Your character is not only the hero, but is made from the letters that make up that very word, as is every over character and beast you meet. Meanwhile, the drab and dreary land where Typoman is set is littered with letters and you must use push, pull, grab, and throw these characters to make words that affect the world around you. Want to hit a switch? Pull an ‘O’ and an ‘N’ together to spell “ON”. Spell “LIFT” to raise a platform – you get the idea.

And it’s an interesting idea, even if the execution is lacking. Those expecting the freedom of a Scribblenauts will be disappointed to know that the words and their associated puzzles are set in stone. You’ll traverse a prologue and three chapters of deeply depressing, uninspired environments; jumping over chasms and manipulating letters to solve each puzzle. Gamepad use is exceptionally minimal, even missing the opportunity to use off-screen play. If you’re standing next to a string of characters, you can use it to rearrange the letters however you choose, which is far quicker and easier than lugging them around. But all too often, once you’re done with rearranging letters, it spawns them far from where you need them to be, usually down a chasm. You can also see hints for every puzzle on the Gamepad screen, which gives you a not-very-cryptic passage of text that contains the word you need to create. Press an icon, and that required word is highlighted for you.

And this completely ruins Typoman. Why bother trying to work out what words you can make with the letters you have access to, when you can look down and see the answer, right there. It wouldn’t be a problem if you had to earn these hints somehow, or the game gave you a certain amount of time to figure things out before handing you the answer on a platter. After you’ve played for a little while, you tend to figure out what most of the words are, anyway, as a lot of functions and puzzles are repeated.

Another annoyance is the actual platforming. This is a game that likes to throw hard-to-jump gaps at you, alongside enemies that chase you, and platforms that fall moments after landing on them. Sometimes, pixel-perfect jumping is required, and your hero’s movement physics don’t always accommodate that very well. There are also far too many instances where you barely have any time to think of a puzzle solution and manipulate letters to spell it. But you’ll stumble past these hazards with relative ease, as this is a very short game, clocking in at around three hours. Sadly, you’ll likely see the very best that Typoman has to offer in that very first hour, as things never really pick up from there.

Aside from the miserable visuals (can we have a puzzle-platformer that’s a little bit less depressing, please?), the presentation is decent, and the way all characters are made from words is pretty impressive, especially some of the Xenomorph-inspired creatures you run into. For a 2D platformer, the framerate was diabolical at times, sometimes distracting. There’s nothing more frustrating that being in the middle of a platforming section, and a game suddenly starts stuttering while you’re trying to nail a tricky jump. You can actually see the framerate speed up and slow down at points, which is just odd.

This is one of those games that’s started off with a really good idea, one that shows a lot of promise. That promise is never truly realised by Typoman, as that original idea is enveloped by a game that just doesn’t do it justice. This isn’t an awful game by any stretch, it’s not nothing special, despite the feeling that it should be.

Easily accessible hints make the whole game a cakewalk.
Dreary design.
Despite being incredibly short, you’ll see everything worth seeing in an hour.

This isn’t an awful game by any stretch, it’s not nothing special, despite the feeling it should be.