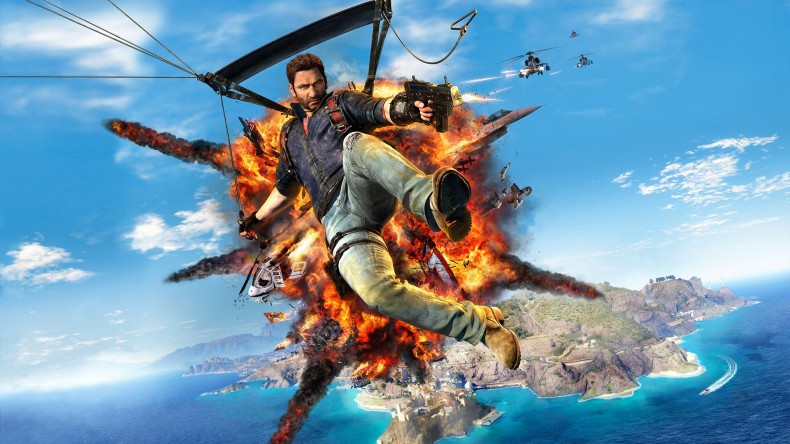 Have you ever hijacked a helicopter, jumped out of it at an inconceivable height, then grappled to a launching missile to disarm it? I have, because I’ve played the living shit out of Just Cause 3, which is littered with these mesmerising, yet quintessentially “gamey”, moments. Check your brain at the door, because Rico Rodriguez is an almost invincible bullet sponge who, thanks to a parachute/wing suit combo, can basically fly around one of the biggest open worlds I’ve ever explored.

It’s exhausting, explosive, exhilarating, exciting, and probably more words beginning with “ex” that I can’t bring to mind, so busy is my brain from the madness I have just controlled. And that’s the key here: all of this is your doing. Avalanche gives you the keys to the world and says “fuck shit up”, barely even asking for your acquiescence.

In honesty, sometimes this actually works against it. It’s always clear about how the mechanics work, and what you’ve got to do, but there’s the usual factor here in that the open world is the star of the game, with the story just there because it has to be. It’s not boring, as such, it’s just that everything you’ll see in the story is done better and, well, more frequently, off the beaten path. On top of that, there’s some unwelcome padding that makes no sense whatsoever. A key component here is liberating your home from the evil overlord, General Di Ravello. He’s a nutter, make no mistake, but his far-reaching army holds court in numerous towns, bases, and outposts – all of which you can (and will) liberate, taking back part of the power. These vary in size, from some enormous bases that can take well over half an hour to conquer, to a small outpost that you can bomb the hell out of from your mobile command post (your parachute) without ever touching the ground.

Littered around these bases are red and silver objects, all of which need to be destroyed. Occasionally a commander will come out, and he’ll need killing, whereas in towns you will need to raise the flag when every bad object and person is cleared out. These are sensational fun, and you’ll get drawn into just flying around liberating these places. Then, suddenly, you’ll go back to the story and be told you need to clear a load more of them before progressing. It’s strange to be forced to do them, especially as this padding can take up to two hours. At the end of each of the three acts, you’ll have to liberate “X” amount of provinces in order to start the last part of that act’s story. So you’ll spend a few hours liberating, only to have to do another form of liberating for that last mission. They’re fun, but making you do anything in such a “free” game world is a bad decision, and it makes the loop feel repetitive, when it otherwise wouldn’t. To really go to town on the bad guys you’ll need to upgrade, or “mod” your abilities. There’s no currency here, just “gears” that you collect from side-missions. These are basically stars, with each mission giving you up to five depending on how well you perform. Upgrades are given out as you go, but each is specific to the type of side-quest. They vary in quality, from the wing-suit “follow the rings” missions, or the “keep the car above 60mph or the bomb goes off then drive it into enemies and bail out” (it’s Speed, basically) type, boiling right down to the simple “fly the plane through these rings”, “drive the boat through the rings”, and “drive very fast to this place”. It’s a bit of shame the mods are only accessed by completing these, and as such there’s really no reward to the story missions whatsoever. It’s worse when you realise that even liberating towns and bases yields rewards in the form of a new weapon or vehicle that can be dropped off by your rebels friends.

There are also escort missions to contend with in the story which would normally be annoying in any game, but because of how much attention you’ll attract, they can be cause for death. To combat this, Rico has the heaviest auto-aim I’ve seen in a while, and can take an obscene amount of punishment. As an anti-aircraft missile blew me out of the sky, and I hit the floor face first, then the helicopter landed on top of me like an enormous fireball of death, I was shocked to get up and walk away – nearly dead, but not quite. It’s ridiculous, sure, but without the bullet-sponge protagonist and the auto-aim, you’d be seeing a lot of loading screens, so it’s fair to say this is the better of the two options. Just Cause 3 is a good looking game, but the best moments are those that come from the chaos. Explosions look sensational, bursting into life with particles flying everywhere, but there’s something to be said for destroying a radar array and having it rain down in pieces around you as you escape, too. Zooming around above the mountains, there’s no question it’s all lovely to look at, though perhaps not quite the visual masterpiece the trailers made it look. Some of the voice acting strays a little too close to stereotyping, but it’s hard to know if that’s intentional or not. Rico is genuinely funny, and seems aware of how insane everything around him is, while his Buddy, Mario, is… well, inexplicably Italian (“it’s a me, Mario” – that kind of Italian). Medici is a fictional Mediterranean Island, so I guess whatever accent Avalanche chooses is just fine. In a nice touch, during story missions when you’re with other characters, they’ll comment on Rico’s talents: some are impressed, others think he’s a show off. It all helps to keep Rico’s home feeling alive. They’ll even celebrate you as you return to a liberated town, or ask you for help with their lives.

Almost every cut-scene ends with Rico walking away from the shot before stopping, as though the director was supposed to fade out earlier, and we’re seeing behind the scenes. It annoyed me at first, then it became funny, and again, I can’t tell if it’s supposed to be funny or not. On the technical front, on PC the frame-rate is inconsistent and feels poorly optimised. Under stress, the regular 60 I was getting (and should be with ease on the machine I play on) would drop to 40, or 30. There were also some odd moments where the game would hitch up, which seemed to get worse the further I progressed, hours-wise. While I haven’t tested the Xbox One version quite as significantly, the frame-rate also seems to suffer when lots of explosions are happening. The initial load time is mammoth, too, and can take from three to five minutes. In-game, there’s less loading, but obviously fast travel, dying, and loading into (and out of) cut-scenes will take a moment. But you know what, I can accept a lot of that when the loop of destruction is this unique, and is so compelling and addictive in its nature. The movement is so smooth and fun all by itself: quickly grappling to something then bursting out into your parachute before wing-suiting around, grappling, then pulling to gain momentum is just brilliant. Hijacking a helicopter and raining fire on the fools beneath you is never less than exceptional fun. Jumping in a plane at a base and flying it to an area that needs liberation, before bailing out and watching its descent into an enormous radar: also great. Climbing to the highest highs and planting C4 on structures that seem impossible to blow up: still terrific. Honestly, there aren’t enough superlatives to describe the wanton, destructive fun on offer, and after a while you’ll make peace with the flaws.

That said, you’ll quickly fall into your own routines. While you can connect two explosive items, then attach a third one to them (and more, when you mod the grapple mechanic), then fire them into one another to blow them up, after a while you’ll realise the quickest way to do things is to plant C4, then as you fly away, detonate it. Floating off, just fire three or four rockets, taking out even more destructible enemy battlements. It doesn’t stop it being fun, but after ten or so hours of experimenting, you will find your favourite weapons and mostly stick to them. This, combined with the grind of forced liberation to further the story, means the “open-world fun” eventually becomes routine. I suspect much of the longevity may come through PC mods, though time will tell.

Rico is going home, back to where it all started for him, and that’s a weird reminder for video games. Games can just be fun without all the drama, and that’s what Just Cause 3 is. If you love open world games that are ridiculously over the top, or if you want to grapple to the underside of a helicopter before stealing it, or perhaps call an airdrop of a tank onto the top of a destructible tower, then this is the game for you – and honestly, who doesn’t want to do all of that? It’s a crying shame that such a fun experience is marred by technical issues and poor choices when it comes to gating progress. Then again, that missile moment I mentioned? Well, the achievement for that is called “F**k you, missile”, and that probably tells you all you need to know.

Possibly the most fun open-world ever, when it clicks.
Core gameplay loop is brilliant.
The wingsuit traversal is so much fun.

Mods are linked to side-quests, some of which are dull.
Story isn't up to much, and progress gating is misplaced.
Technical issues are disappointing.

An open-world fill of exquisite explosions that, while often falling afoul of flaws, might well contain some of the most fun moments this year.