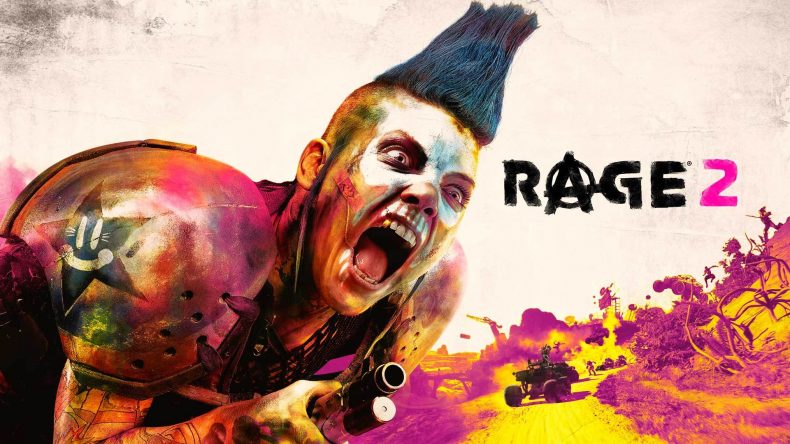 The marketing campaign for Rage 2 has been an arrogantly barbaric fusion of neon, explosions, blood, gore, promises, and Danny Dyer. There seems to have been a lot of faith put into the dream coalition between id Software and Avalanche, and why not? Both have a healthy list of titles under their belts, and both are arguably leaders in their recognised genres. Unfortunately, the things I was looking forward to haven’t been executed as well as I’d liked, and although the shooting is extraordinary, there’s a fair amount I wasn’t a fan of.

You start the game choosing between one of two characters – a male or female – and from there, you become a Ranger hellbent on gaining revenge on The Authority and its leader, General Cross. Much of the story is as generic as it comes, and the vocal talent is over-the-top, b-movie calibre that makes you wince as you listen to some of the wasteland’s more eccentric characters. It’s a generic tale of revenge, and one that doesn’t last that long at all; not that its a bad thing, mind you. There’re some memorable characters, such as the bizarre and creepy Doctor Kvasir, but on the whole they’re only there to act as conduits for the exceptional combat. Enemies are relentless – never spending much time firing at you from range, preferring to run at you head on trading kamikaze tactics for caution. Whilst the combat is excellent, the types of missions – both in the main campaign and in the side missions – often see the same repetitive ideas. Go somewhere, take out the enemies, return. It’s a tried and tested formula, and Rage 2 rarely strays from that path, although there are some side steps, such as a mission that sees you hop into a Destruction Derby race. But come on, you’re here to shoot, right? If you’re wanting Rage 2 to have a thought-out story with plenty of things to do off the beaten path, you may want to give it a miss. However, if all you want to do is play Doom with a post-apocalyptic setting, then this is for you.

When it comes to holding a gun and blowing the crap out of your foes, id Software’s influences are right there. The speed of movement and wallop of each bullet feels magnificent, and the variables for certain weapons is divine. Take the shotgun for instance. Of course, a shell to the head of a bandit will see it explode, but focusing down the sites by pressing your left shoulder button will allow you to knock the enemy flying. There’re also a wealth of upgrades to your abilities that can be found in various Arks scattered around the wasteland, giving you unique skills that will definitely help when it comes to utilising your Ranger suit.

Many of these powers – known as Nanotrites – turn you into a wasteland superhero of sorts, bestowing upon you Jedi-like powers such as Shatter, which sees you force push enemies into one another, or if you’re smart, toss enemies into swinging blades and other environmental dangers. One of my favourites is the Vortex, acting as a suction grenade that gathers up nearby enemies and then spits them out all over the place upon impact. Lots of these Nanotrites offer advantages in battle and help to improve your combos, building up Overdrive as you go, but also aid you in recovering health and surviving death.For example, Defibrillation gives you a chance to be brought back to life depending on whether you get the button prompts correct in the allotted time. One of the key features of combat is Overdrive. When you’re racking up kills your Overdrive fills up, and went it’s full you can press the two shoulder buttons to unleash a short timed session where all weapons have a much more devastating effect, as well as your Ranger suit. Going up against one of the bigger bosses allows this mode to come in very useful, and quite often you’ll get plenty of chances to use it. Unfortunately, the combat does begin to get repetitive, but I never once got sick of seeing my enemies explode in a cloud of blood, or watching their intestines cover the walls.

Taking on board all of the Nanotrites, Overdrive, gun control, and movement, Rage 2 is immensely satisfying. When you do approach an area featuring different enemies, you have plenty of tools at your disposal, so no one battle feels the same. Just as 2016’s Doom provided a consistently sound FPS experience, Rage 2 nails that feeling once again. No fight can be approached with any kind of stealth; if an enemy sees you, the whole gang come running. There isn’t a sneaking option for you, and no button will allow you to use a swift knife slice to the neck. No, this is a game that wants you to dive right in. There’s an option to collect any nearby Feltrites (health crystals) from dead enemies, but it only has a short range, meaning one of the only ways to regain health is to do so right in the middle of a scuffle. Away from the gameplay, Rage 2 has a lot of currency options and menu screens. At first they’re overly confusing, offering you currency to heal, to upgrade your skills and your vehicles. Once you get to grips with what each bit does, it becomes much clearer; however, I’d rather it’d be streamlined to match the simplicity and enjoyment of the combat. There’re crafting elements as well, but the need to do so doesn’t factor in too much. You can craft some health packs or Wingstcks (killer boomerangs) when the going gets tough, but you’ll find a fair amount of them in the field as well.

Rage 2 makes shooting its key focus, utilising the skill of id Software’s team to make each fight feel liberating, but the open world and repetitive missions held back my enjoyment as the game reached its conclusion. I felt little reason to finish all the side missions, but the main campaign was long enough to make sure my interest didn’t falter. Despite my issues with it, I’d still recommend fans of Doom give this a go; its a relatively dull story, but the wealth of combat options makes it a must for FPS fans who just want to blow shit up.

Combat is exhilarating
Nanotrites are an awesome addition

Whilst Rage 2 offers an intense wave of combat, the open world is dull, and the story and missions rarely excite