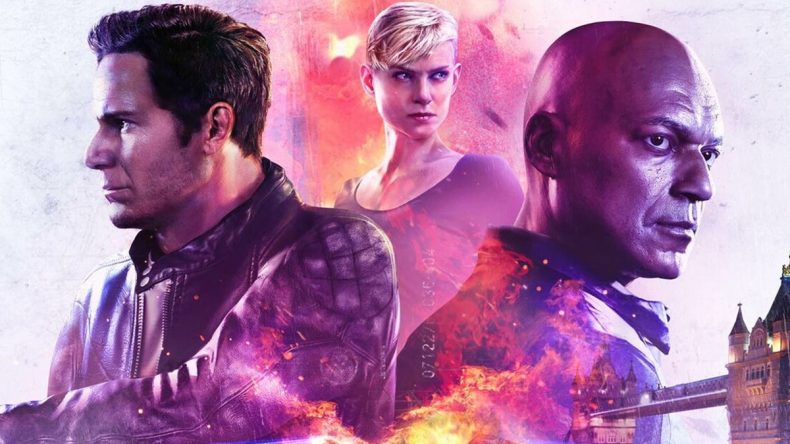 To say I had a blast playing Blood and Truth would be an understatement. It’s filled with explosive action, stunning set pieces, superb control, and a story that’s both funny and emotional in equal measure. We’ve finally got a game that makes the best use of PlayStation VR, providing a healthy story and a solid gameplay experience that rarely lacks in action and explosions. There’s a clear inspiration from 90s gangster films such as Guy Richie’s Lock, Stock & Two Smoking Barrels and Snatch, but this stands on its own two feet, only ever held back by some of the drawn-out cutscenes.

Right from the get go you’re thrown into the action, moving through a war zone in an unknown Middle Eastern country. It’s a tutorial that gets you used to the controls without bogging down the opening moments. Before the end of the level you’ll have run across the rooftops shooting all and sundry, and sat in a car firing at motorbikes and jeeps that’re chasing you trying to gun you down. It’s a great intro, and every other segment is filled with a similar kind of thrill.

You play as an Elite Special Forces soldier called Ryan Marks. Upon his return to London after his father’s funeral, a crime boss interrupts the wake claiming he wants to take over your family’s assets. He’s a proper dick, but the Marks’ family aren’t to be messed with. What ensues is a journey to take him out before he gets what he wants. Unfortunately, things don’t go to plan, and what follows is a lot of chaos and excitement as you make your way through various missions in an attempt to kill him and ruin his criminal empire.

You can play with a Dualshock controller, but I advise strongly against this. Two Move controllers make it a hell of a lot better. You start off with a pistol, but as you make your way through the game, you’ll end up being able to wield multiple weapons, such as shotguns, sniper rifles, and assault rifles. Moving through a hotel gunning down enemies from all angles is liberating, and thanks to the brilliant accuracy and calibration of the Move controllers, every bullet feels satisfying to fire. You have to collect ammo, but it’s never clear if you’re almost out or not, and I never found myself without ammo even if I’d not collected it in a while. You’ll find grenades scattered around some levels, and you’re required to pull the pin then launch it like in real life (I assume), providing layers of realism to every action you do.

You can’t free roam, and even though it’s an on-rails shooter, you don’t teleport to a new position. You walk or run by pressing the centre button, and you’re never rushed or force to move if you’re not ready. Also, if you’re behind cover, you can press Cross or Circle to strafe left or right, giving you plenty of control in sticky situations. In some scenarios you’re forced to run without having any control over movement, but these sections often free you up to worry solely about your shooting, and often end with a great set piece, such as jumping out a window, falling from a great height on a construction site, or running off a crane to then parachute over the Thames.

Outside of the shooting, there’re moments where you have to use certain tools to crack open safes, disrupt control panels, turn off electric fences, and more. In your tool kit there’s a lock-picking set, a screw driver, pliers, a homemade disruptor bomb, a fuse, and a lighter. You use them exactly as you would if you had them in front of you, and they all provide another distraction from all of the action.

The variety in the levels and the detail of them is impressive for a PS VR title. You’ll find yourself in art galleries, casinos, and in a soon-to-be-demolished building, to name a few. Not only do you have to use your guile and guns to get through them, but there’s also plenty of climbing, air vents to get through, and monkey bars to swing across, giving each level its own set of challenges. You never grow tired of these sections because they’re blended in quite nicely with the shooting. Blood and Truth also offers moments of pure joy that add a great touch to the overall experience.

In the art gallery, you’re tasked with vandalising it, and one such moment wants you to use spray paint to ruin one of the paintings. Naturally, I drew a big cock on it, and Ryan’s brother even made a joke, saying, “I bet I know what you’re drawing,” whilst laughing. Another bit I thoroughly loved was when you’re stood in a nightclub and you get to mess around on some decks, pressing buttons to trigger pyrotechnics, scratching on the record, and trying to blend the track with another. It’s a lot of fun, and these moments are laced throughout the game, making the entire experience thoroughly enjoyable.

As far as PS VR games go, Blood and Truth is one of the best yet. The gun play is excellent, and the variety of the missions and weapons constantly mix things up, making sure you have a great time playing it. The cut scenes drag on sometimes, and having to holster a weapon every time you have to call a lift, or turn something on can be a tad frustrating, but overall this is by far my favourite VR title, and a great mix of humour, action, and emotion to boot.

Blood and Truth is a lot of fun, making use of a wide range of guns and all of the Move controller's capabilities.