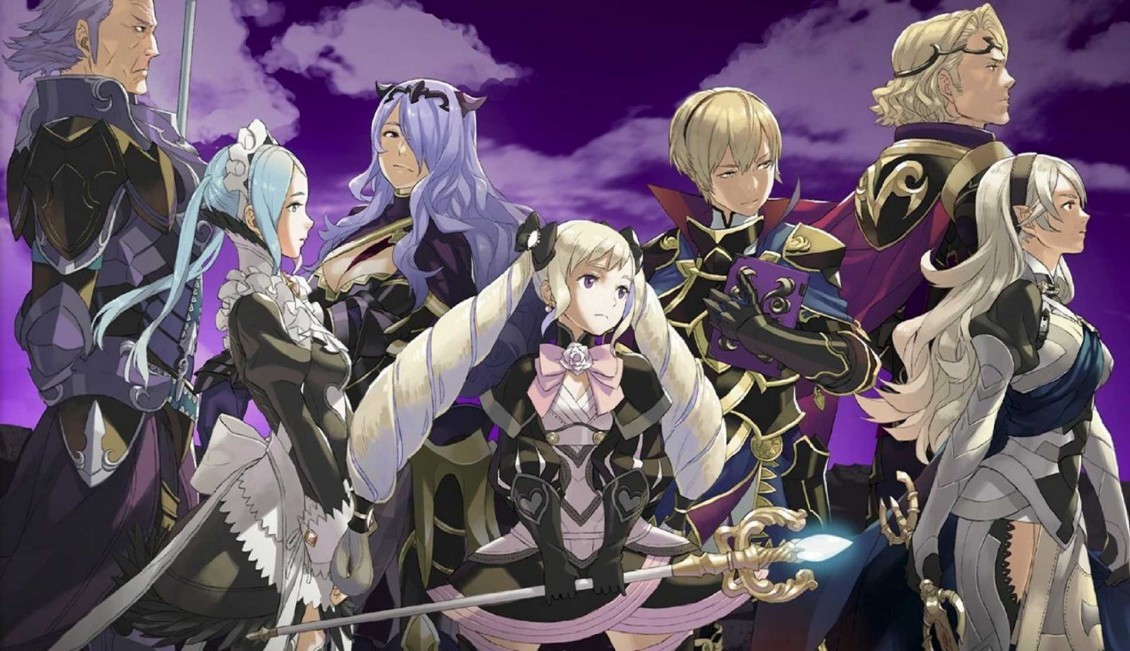 Caught between the two warring kingdoms of Hoshido and Nohr, you must decide which side to fight for. Hoshido is ruled by the radiant Queen Mikoto, a gracious and pleasant woman whose people adore her. They desire peace with Nohr, and would rather settle their feud with the opposing kingdom using diplomacy. Hoshido is vibrant and colourful, resembling feudal Japan with its plentiful sakura trees and pagoda-inspired palace.

Nohr is ruled by the vengeful King Garon, a twisted and evil ruler who despises Hoshido and wishes to see them crushed by force. Encouraged by his wicked concierge, Iago, Garon is bloodthirsty and will stop at nothing to see Hoshido under his rule. Nohr, in comparison with Hoshido’s beauty, is a kingdom in turmoil—decorated with barren fields and destroyed settlements. The first six chapters of the game are the same regardless, with players making their choice in Chapter 6. Conquest is the path which sides you with Nohr. After years living in isolation in the Nohrian palace, King Garon sends you, his child, out to investigate a Hoshidan settlement which lies in the depths of the Bottomless Canyon. Upon arrival, one of your soldiers turns against you and pushes you into the darkness. When you awaken, you find yourself in the Hoshidan capital, surrounded by members of the royal family and in audience with Queen Mikoto herself. It is explained that you are in fact an heir to the Hoshidan throne—kidnapped at a young age by King Garon and imprisoned in Nohr. An assassination attempt occurs, killing Queen Mikoto and causing you to unlock your hidden skill: Dragon Vein. This turns you into a magnificent beast, capable of doing great damage. After returning to normal, you acquire the legendary blade Yato, said to belong to the one who will save the world from impending doom.

It is from here that you are tasked with choosing your side, either sticking with your hereditary family in Hoshido (Birthright) or returning to your adopted family in Nohr (Conquest). With such an evil king in charge of Nohr, it may be difficult to understand why anyone would choose to return to the man who kept them prisoner, but the resplendent qualities of your royal siblings do a lot to convince you otherwise. Frankly it wasn’t my first choice either; the way the opening scenes frame the Nohrian side makes it almost guaranteed that most people will stick with Hoshido. Garon only worsens throughout the course of the game, but your bond with princes Leo and Xander and princesses Elise and Camilla make the pain inflicted by Garon bearable.

Conquest is, in theory, a far more difficult game than Birthright, which is perhaps why the opening scenes frame Hoshido in a more favourable light. You are warned before embarking on the Conquest path that there are limited opportunities to salvage gold and experience compared to the Birthright path. Having never played a Fire Emblem title before, I felt I was being thrown in the deep end slightly but fortunately, the mechanics of the game are not that difficult to get to grips with.

Despite the grim warnings of impending exasperation, I actually faired quite well with the difficulty of Conquest—only really struggling with around five or six of the missions out of a total of twenty-seven. The gradient of difficulty is hard to predict: one minute you could be sailing through a level, crushing all those standing in your way, then the next you’ll be groaning in frustration and turning it off for the night. Conquest battles differ from Birthright’s in the sense that the former tasks you with completing more complex objectives to achieve victory. Winning battles in Conquest can mean you have to escape an arena with all units surviving, which is no mean feat when enemies are fast and lethal. I played on the easiest difficulty too, with perma-death switched off. I’d only recommend perma-death in Conquest for hardcore Fire Emblem fans or those who liked to be tied up and whipped. The battle system of Fire Emblem Fates is similar to its predecessor: turn-based on a gridded environment. There is a huge varietyof classes, who grow very differently in terms of traits. Archers such as Niles will have less defence but will have higher skill, whereas Malig Knights such as Camilla can travel vast distances in comparison to heavier classes such as Knights. Balancing your team and selecting the right units for the situation is almost key to winning battles early on, but by the time you’re nearing the end game, it’s likely you’ll have become accustomed to using the same units every battle—making them far stronger and more viable options for the most challenging encounters. You have the choice to organise each unit’s inventory manually, equipping them with your favourite weapons, or if you’re lazy, like me, you can optimise your entire inventory—equipping the best weapons to the most suitable classes. The choice is yours: I had no difficulties by optimising automatically. It got the job done and saved me some time, but in my second playthrough I intend to organise it all myself.

A weapon triangle forms the core of the battle system and can completely change the outcome of a fight. Each weapon will be designated a certain colour: red, blue or green. A tutorial early on proclaims that red weapons trump green, green trumps blue and blue trumps red. This seems clear cut to begin with, but as the game advances, some weapons can share traits of two colours which can mix up enemy encounters and leave you with the upper hand or cut down in the dirt. The ability to pair units together can be a blessing or a curse: on one hand, it allows you to build bonds between units, making them more effective when fighting alongside each other, but on the other hand, it prevents you from tag-teaming with adjacent units for a double whammy. It comes in handy when trying to protect weaker units like Azura, but the inability to tag-team is debilitating since victory usual comes in situations where you’re able to quickly eliminate the enemy, thus snatching away their opportunity to injure units.

The cast of characters in Conquest is widely varied and mostly loveable. I found myself particularly enamoured with the majority of the core characters such as the purple-haired Camilla and the valiant Xander. That’s not to say that the other supporting characters are not interesting: Silas is a handsome suitor that relays shared memories of your childhoods during your encounters, who contrasts greatly with archer Shura who is often silent and melancholy. The conversations had between units often reveal fascinating nuggets of backstory which help to make characters feel deeper and more believable. If you enjoy the romance-simulation side of Fire Emblem, it may be advisable to keep your most beloved units safe in battle if perma-death is enabled. Once they die in battle, they’re gone forever.

The story of Conquest is mostly enjoyable, but lacks the “heart-breaking” decisions I was promised when researching the series. While the premise is majestic in scale, the plot feels stagnant at times, not really going anywhere, with some battles feeling like they lack in purpose in the grand scheme of things. Conquest starts strong, but it’s not until the last six or seven battles that the plot begins to fire up for the climax. Conquest raises important points about loyalty as your character struggles with the consequences of choosing a side. However, the delivery of some of these morals and plot points can get bogged down in some awkward dialogue that detracts from the overall atmosphere of the game.

Conquest, in conclusion, has been a pleasant surprise for me. It offers a wonderful in-depth battle system, with a focus on tactics that doesn’t sacrifice style in the process. It is a visually stunning game, with battle maps well thought-out and precisely designed. Cutscenes are perhaps the highlight of the design side, presenting some of the most beautiful I’ve ever seen in a handheld title. The cast of characters is fascinatingly varied, resulting in your army incorporating a wide range of personalities. While the plot stalls slightly at times and the difficulty can feel overwhelming, Fire Emblem Fates: Conquest is a terrific RPG title that you’ll want to play over and over. The immaculate design and genuine emphasis on great tactical gameplay propels it into the top tier of handheld RPGs available today. Not to mention that bloody soundtrack.

Plot can stagnate at times
Dialogue can be awkward in places

Fire Emblem Fates: Conquest is one of the best RPGs available on a handheld device, offering a punishing challenge that is mischievously veiled by immaculate visual design and thought-provoking tactical gameplay.