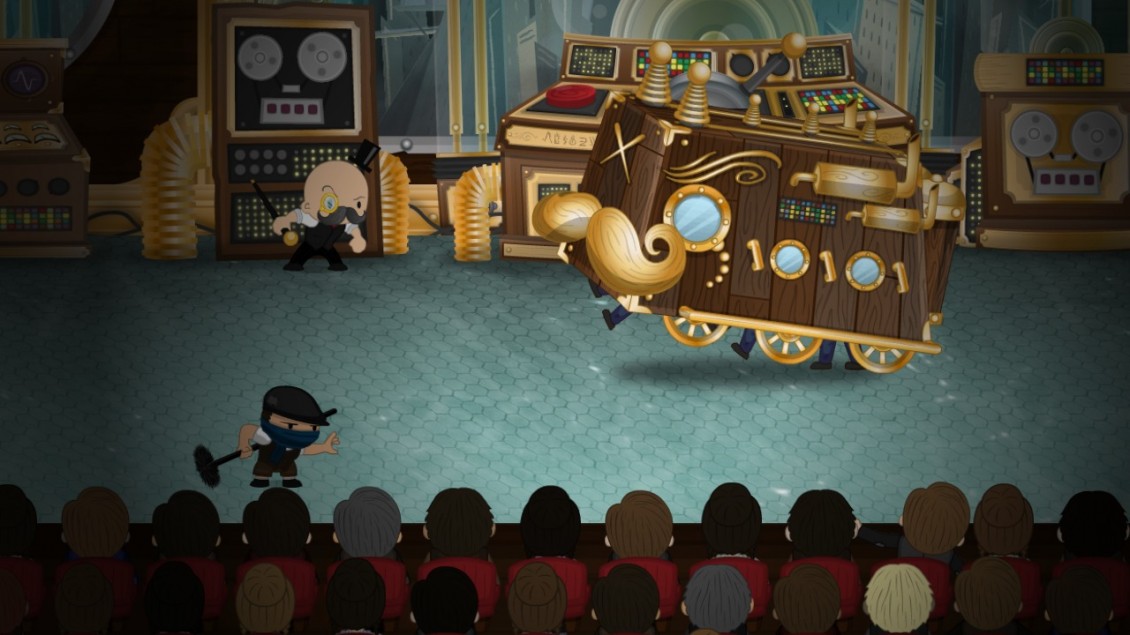 “Very British” is undoubtedly the best way to describe Foul Play. With top hats and chimney sweeps, wit and humour, a rough-and-tumble, underdog attitude, basics inexplicably failing and, at times, it being a bit dull. Very British indeed.

In Foul Play, which initially released in 2013 on Steam and recently found itself on PS4, you play as the (who’d have thought it) very British daemonologist Baron Sebastien Dashforth; and if in co-op; his wise cracking, quick jabbing, working class cockney mate, Mr Scampwick. However, you’re not playing through the adventurous pairs’ stories as they happen, but rather a re-telling of them in the form of theatre, on an endless stage in front of an equally endless adoring public.

Well, they will be adoring if you do it right. As its clever idea that sets it apart from other brawlers of a similar ilk, is that you don’t have a traditional health bar, per-say. Instead you have a bar that tells you how much the crowd are loving your performance. This bar goes up and down depending on combos, how long can you smack enemies in the face with a cane before you get hit instead will send the crowd into rapturous applause or a chorus of boos. When audience satisfaction gets too low, the curtain calls and you’re hooked off the stage. It’s a novel idea and one that I like a lot as it changes up the somewhat tired dynamic of a health bar and also ups the tempo of any “scene”. If you stand around and dawdle too long the crowd will soon get bored, and then the show is over.

This unique theatre setting lends itself wonderfully to some clever practical humour, be it with back stage crew getting caught in the shot, wayward performers wandering on to the wrong stage or defeated enemies crawling off stage as inconspicuously as possible. The humour doesn’t end there, either, as the writing is also quite witty too. Be it Mr Scampwick’s quick come backs, fourth wall breaking remarks, shameless puns, or (my personal favourite) a big mermaid complaining about a grueling season and injuries to his volleyball team, there are several moments that had me quickly breathing out of my nose and smiling. The short story itself, of an abandoned son who eventually finds the clues to his father’s whereabouts, is alright, too.

All of the five plays which, aside from the final one, all contain five sets, are also all set to vibrant and interesting backdrops, which the backstage workers are constantly moving and changing. From rough pubs to Atlantis, from ancient Egyptian crypts to Devonshire graveyards, every performance has something interesting to see. But despite all that, I coming away from Foul Play feeling slightly disappointed. My biggest problem of all is that I had constant saving issues, as progress, big or small, was erased every single time I returned to the game, and being unable to skip cutscenes completely made it a chore to have to constantly catch up. The combat, while regularly adding new moves to the repertoire and feeling really nice when in full flow, as it’s extremely fast paced and allows you to bounce around the screen like Yoda in those shite movies, does become repetitive quickly. Charms which can be won and used to provide advantages, and challenges that make you focus on certain moves or attempt to reach high combos try to spice things up, but fail to do so. I will admit though, it feels satisfying when you hit a certain combo and the audience let out a massive cheer and throw their hats into the air in jubilation of my achievement. Go me.

But I did find more issues as a lot of fights are plagued by difficulty spikes, as countless enemies would invade the screen and completely drown out the supposed star of the show, reducing him to a mere extra, unable to be distinguished from the rest of the cast. I found checkpoints to be a bit harsh on occasions, too.

So while I admire Foul Play for going through with an interesting and unique idea – one that has a great aesthetic and typically British humour – I can’t get over its other typically British failings: suddenly failing to work (transport in Winter) and being just a little dull (life).

Saving issues.
Difficulty spikes.
Combat can be a bit too repetitive...

Foul Play is a novel idea which takes an age old mechanic and twists into something new and unique, and its great theatre aesthetic and witty humour are both enjoyable to behold. However, repetitive combat plagued by difficulty spikes, and constant saving issues, left a slightly sour taste in the mouth.