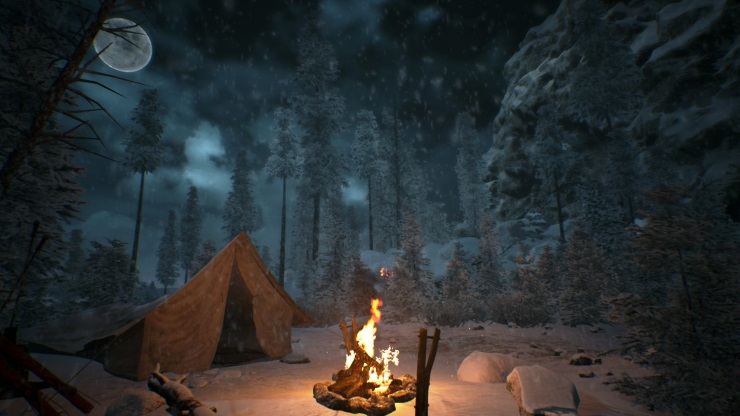 Presenting itself as a Firewatch-meets-Slender sort of mash-up in the snow, Kholat is another entry into the wander-game genre – but it’s heavily defined by a single feature: orienteering. Instead of presenting you with waypoints and route markers aplenty, Kholat ditches you in the middle of the Russian wilderness with a map and a compass and expects you to evolve into some sort of modern day Ranulph Fiennes. But this is not Fiennes. Not Fiennes at all.

Based on the mysterious Dyatlov Pass incident of 1959, in which eight Russian college students went missing in the Ural Mountains, Kholat offers up its own interpretation of what happened on that Arctic winter night. It’s preceded by a short cut-scene, discussing briefly theories about what happened and planting seeds of worry into player’s minds — disclosing details such as the student’s tents were cut from the inside out, and that all of them ran off into the darkness wearing nothing but their underwear. Unsurprisingly, they all turned up dead — killed by exposure to the elements or by some unexplained crushing force that seemed to cause immense internal damage. Something “scared them out of their wits” and it’s your job to find out what. The orienteering aspect of Kholat won’t feel new, but will certainly feel frustrating. What the mapping system of Kholat lacks is a location indicator showing where you, the player, are currently situated. Instead you’re expected to navigate the expansive map using only your compass (decorated with Russian letters so you’re never quite sure which direction you’re facing) and a scarily inaccurate map. This is an interesting and gutsy idea, and one I would usually support, were it not that it is in fact such a hinderance that it severely stunted by progression through the game.

There is a coordinates system, and written on the map are a number of pre-determined coordinates which you must make your way to — easier said than done when ‘landmarks’ are indistinguishable from the virtually identical environments of snow and mountains. I would often find myself stopping and examining the map for minutes on end, before settling on a direction and heading off. Within minutes, I would find a collectible note, only to realise it was an accidental find: the discoverable I actually intended to collect was a ten-minute hike in the opposite direction. This backtracking, confusion and regular stopping-and-starting makes the game dreadfully slow to get through and it simply evaporates all sense of excitement or tension that has been building prior. The ghouls of the game, and therefore the beings you should avoid at all cost, are orange ghost-like creatures which seemingly appear out of thin air at random locations throughout the game. They seem to appear more frequently within caves and when you’re using your flashlight or running. That said, on numerous occasions while running through caves or valleys, a ghost would materialise inches from my face and kill me instantly, which would send me all the way back to the location of my last collected note. This unfortunately only adds to the infuriating feeling and the tedious sense of getting absolutely nowhere. Not to mention the fact that the ghouls aren’t particularly frightening or menacing adversaries — I was more startled by the suddenness of Sean Bean’s narration at random points of the map.

Visually, the game is pretty spectacular but is utterly plagued with frame-rate issues. The opening few minutes look astounding and show off the true wizardry that is achievable on Unreal Engine 4, but once the going gets tough, the game is riddled with dreadful frame-rate drops, some of the worst I’ve seen on PS4. While the textures and general atmosphere of the Ural Mountains are a success, it is incredibly difficult to feel immersed in a world that feels like is coming apart at the seams.

Audio design on the other hand, feels much more successful but still feels slightly misdirected — the chilling sounds of howling wolves, whistling wind and rustling branches do wonders for the atmosphere. Sean Bean narrates as previously mentioned, and does a pretty good job too: even if what he’s saying to try and form a plot is incoherent nonsense. But none of this, not even the Bean fella, can make up for the grievous visual issues that Kholat harbours. Horror titles are never really renowned for their stories: some can get it right, but many often cross the borders of sensibility by telling tall tales that are outrageously unbelievable. Kholat however, seems to do neither. The entire game is a slow burn (literally) and after finally collecting all the pieces of the puzzle, a nice big payoff would suit you nicely. But what do you get instead? An anticlimactic and off-track ending that only leaves you with more questions than answers. Like farting all day only to get home and find out that you’ve shit your pants.

For the record, I’d like to say that the premise of Kholat is incredibly strong — it is just a monumental shame about the execution. Grievously weighed down by its unforgiving and downright confusing core orienteering mechanic, Kholat is more likely to leave you with your head aching rather than your head spinning. Visually held back by its dreadful frame rate issues and emotionally stunted by its feeble plot and anticlimactic ending, not even Sean Bean could save this title from being left out in the cold.

Grievously weighed down by its unforgiving orienteering mechanic, tedious gameplay and frame-rate issues, Kholat is more likely to leave you with your head aching rather than your head spinning.

My Memory of Us review