Return to Popolocrois: A Story of Seasons Fairytale Review 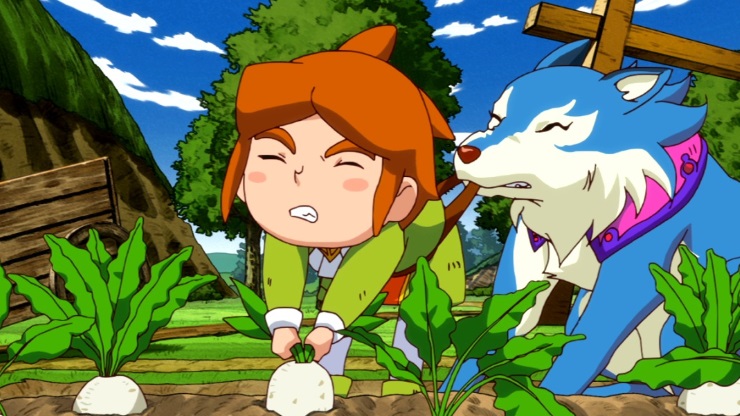 I love when established franchises have a cross ever game. Persona and Etrian Odyssey did this with Persona Q and now Return to A Story of Seasons Fairytale does it with PopoloCrois and Story of Seasons. The farming aspects of Story of Seasons gel well with the charming RPG gameplay of PopoloCrois here to give you a nice and wholesome albeit simplified experience.

As the name suggests, this plays out like a fairytale. You play as Pietro, a young prince, who sets out to prevent the kingdom of PopoloCrois from being destroyed by darkness. Lord Gryphot, the evil lord, wants to take over PopoloCrois and you get kidnapped so to speak thanks to a traitor in your midst. From here on, you find yourself in Galariland which is mostly barren. Fairies in different parts help you defeat dark monsters and regain fertility to farms and closer to getting back home to PopoloCrois. While the main story plays out like your average fairytale with a love interest in the form of a young witch, Narcia, I enjoy the different characters you meet across your journey. There are many, and most of them are memorable enough to leverage the story to something worth talking about. The localisation is great and there’s a boatload of charm oozing out of every orifice in in Return to PopoloCrois.

I’ve been craving something lighthearted like Fantasy Life ever since I beat it last year and this game delivered to some extent. I enjoyed the action combat as a mage in Fantasy Life with the ability to just relax and fish or cook for a bit. Here, there’s turn based combat similar to the Trails games and farming to relax. While both of these aspects are nowhere as detailed as their parent games, the mix worked well for me. The turn based combat is simple and it has some aspects of modern JRPGs that I have come to adore in games like an encounter level option that lets you reduce or increase random encounters on the fly. There’s also tons of content here with the main story and loads of side quests and things to collect to keep you busy for a long time.

I do enjoy playing games with 3D on thanks to 3D actually working well on the New 3DS and PopoloCrois is great visually for the most part. There are some re-used assets but everything is so colourful and nice. Characters are distinct and the UI is simple and pleasing. I wish some more effort was put into the mini map as it can get a little confusing at first with loads of new areas being introduced together.

What is a turn based RPG without its soundtrack, right? Here, there’s a very unbalanced quality to the soundtrack. After nearly 30 hours, the combat music never felt right to me but the music for each area fits properly and sounded pleasing. There are three different voice track options with one being in English and two in Japanese. The English voice acting is alright but it always feels like characters are about to die thanks to their screams or howls after being hit for one or two points of damage in combat which felt strange.

I enjoyed Return to PopoloCrois enough to give the proper Story of Seasons a fair shot having played some of the Harvest Moon games in the past. It plays like a nice home cooked meal and is fun even though clearly simplified as both an RPG and a farming simulator. If you’re looking for a light RPG or just a relaxing game with a nice little tale to be told, give Return to PopoloCrois: A Story of Seasons Fairytale a shot.

It plays like a nice home cooked meal and is fun even though clearly simplified as both an RPG and a farming simulator.

Story of Seasons: Friends of Mineral Town is coming to Nintendo Switch in Europe