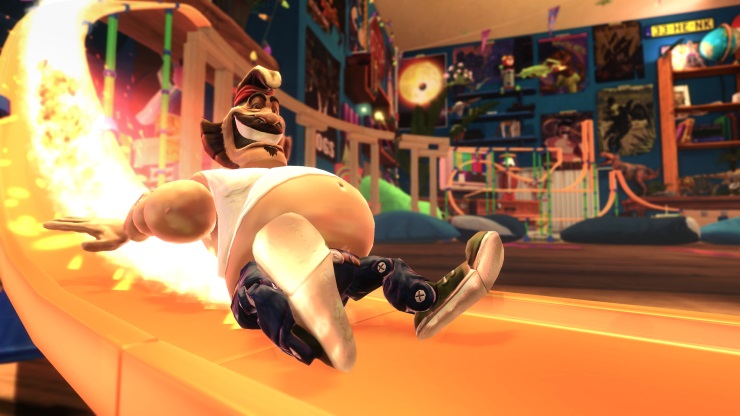 There are plenty of games out there in the big, bad world that engrain themselves in your psyche. Those types of jet fuelled, velocity focused runners that get the dopamine flowing as you constantly try to beat that elusive record, whoever it may belong to. “New personal best!” it gleefully tells you, but that’s not enough. That’s never enough. That’s still 0.5 seconds too slow. You have to go again. And again. And again.

Then, finally, it clicks. You time your leap to perfection, landing the arse slide in the exact position needed to allow the flames of momentum to burn in your wake and then your away, racing towards the finish, feeling like the leader in the race on the final furlong. The end is in sight, just one more obsta…

There was just that one last little wall jump you had to make and you cocked it all up. You tripped on that last hurdle and face planted the cold, lonely ground. You squeeze the controller up to the point of snapping and then sigh. You have to go again. This may sound like a rather frustrating process, and by God it is, but it’s a goddamn addictive one and something that Action Henk gets down to a tee.

Run: that’s all you have to do in Action Henk – simple to do but hard to master, especially as the mass array of tracks that get more difficult as you go. You play as Action Henk, an out of shape action figure who puts Homer Simpson’s busting gut to shame, who wants to get back in the game and relive his past glories. Compete with the younger, fitter, better, generation (also playable once unlocked), and show them who’s king.

Henk finds the opening tracks a doddle, he gets back into action on home turf, the most stereotypical 90s American boy’s bedroom imaginable, a treasure cove of “I remember that!” references, by running on Hot Wheels-esque tracks and bouncing off walls, trying to avoid the floor of deadly bubbling lava below. The first two stages take place in this budget Toy Story world and they help you to get a feel of the flow, and how the all important momentum is built up in order to smash the records and claim gold medals. Soon after, the bedroom is abandoned for neon discos, sunny beaches, deep jungles, and lands of fire, thus the tracks get more complex and challenging to complete, let alone get great times on. That’s where Henk then realises he’s really going to have to work hard if he’s ever going to reach his fabled greatness once more. These kids have it nailed down, and it’s going to take a great deal of determination to usurp them.

It’s the type of game that really dialed in on my personal OCD, seeping into my nerves and driving me to keep going. I utterly needed to get the gold medal on every single stage as that blasted silver just blemished the whole thing. I also imagine that this goes up tenfold to people who care about leaderboards and such.

There is a lot in Action Henk; by my count 49 levels, though I’m sure some haven’t been unlocked as of yet, but it is all pretty much the same. A fair number of levels require a hook to swing from platform to platform to be completed, which does offer an occasional nice change of pace from the perpetual forwards motion, but all the obstacle courses may become repetitive to some. I never found it so, and that lure of the gold medal – that “one more go” factor – had me playing far later than these weary eyes can handle. It is not without its faults, as the music can get annoying when you’re stuck on the same track for a while, which caused me to play with my own music instead. I also often found myself becoming a bit frustrated with the physics of the world occasionally, and how the character would sometimes get stuck and lose all momentum, or just wouldn’t be able to reach over a certain ledge. But this was remedied by the restart button that allowed my mistakes to be quickly rectified with yet another run of the gauntlet.

Action Henk isn’t new or groundbreaking and it’s certainly simple, but that simplicity leads to its addictive nature. It’s fun, fast action set to bright, bombastic backdrops that will make your palms sweaty as you desperately try to break that record, but as the snake bites its own tail you will fail and have to go again.

Music can start to grate.
Some players might find repetitive.
Can be frustrating .

There’s one aim in Action Henk: run fast. Run faster than the ghosts, faster than your friends, and faster than strangers on the internet. Beating records is what drives you on through sweaty palms and uncountable attempts, because the feeling as you finally break one is thrilling. It’s an addictive ride that will have you pressing the restart button over and over again.