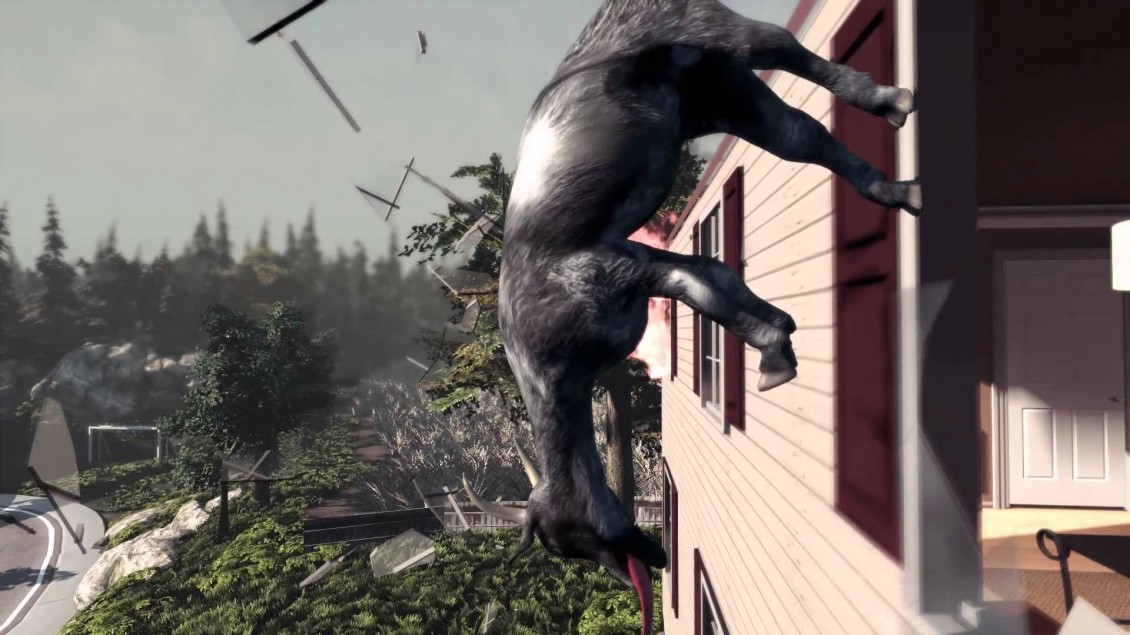 Goat simulator is an odd game. It feels very much one that will fall between the lines of you either love it, or you just cannot fathom how it has become so popular. It seems that those that love it appreciate the “it’s so bad, it’s good” aesthetic and physics flaws, whereas those that hate it can’t see what the fuss is about. Or in my case, how the hell was this thing popular?

The Bundle features the original game and Mmore Goatz Edition which contains the DLC that was created for it. Included are: GoatZ Before Outbreak, Goat MMO Simulator, and GoatZ – a hilarious (ahem) riff on the incredibly popular survival sim DayZ, as well as a tutorial mode to teach you the basics of how to survive the zomb-goat apocalypse.

Both Goat Simulator and the Mmore Goatz Edition are two separate games with their own set of achievements to work towards. Goat Simulator will be familiar to people who have already seen the many videos on YouTube for the game, but it’s basically a sandbox for creating as much mayhem as possible playing as a goat. There are a number of challenges to perform, like launching yourself in to the air for six seconds or simultaneously exploding ten gas canisters at once, but other than trying to tick each task off you are pretty much left to your own devices. The map is littered with collectible items and a few nods to popular games such as Minecraft, and there are two distinct playgrounds to visit with different things for your goat to try to destroy. But the game play is essentially the same wherever you go: launch yourself head on into that object and see what happens. It’s well known that the game was originally created as joke for an internal game jam and honestly, as fun as it is for five or ten minutes, it would have been best served staying that way. Which leads us to the Mmore Goatz Edition…

GoatZ Before Outbreak is essentially the original game, on a slightly different map. Your goat is already a zombie and you can either choose to amble about causing mayhem or if you bleat in the face of five people you will start the apocalypse and GoatZ After Outbreak will automatically load.

GoatZ is the worst of the bunch. A goat survival sim where you are a zombified goat, your only purpose is to survive as long as you possibly can. You’ll need to manage your hunger and health bar, both of which can be improved by head butting zombies repeatedly and eating their brains. To add an extra layer of futility and frustration there are also an array of weapons you can craft, and by crafting I mean you can drag a variety of items across the map with your tongue and place them on to a crafting workstation, or rather a big X on the ground. “Hilarity” ensues when you create a gum ball projectile device for killing zombies quicker, but that is only if you can actually manage to drag the required ingredients to craft the weapon. Oh how we laugh when the last material we need is incomprehensibly rooted to the spot and will not budge at all, no matter how much back breaking work your goat puts in to try and pull it free. How we giggle when we try to place materials onto the crafting square to create a weapon, your goat with all the delicate finesse of a stampeding elephant smashing all your ingredients to the four corners of the map. The physics, which are deliberately bad, make the idea of a survival sim a terrible exercise in crushing pointlessness and frustration. My attempts barely lasted two days each time and ended as always with me asking myself “why”.

Goat MMO Simulator is marginally better, with some genuinely funny and clever bits. It is still essentially a sandbox environment for you to roam about in causing mayhem, but it has had a MMO skin layered on top. You can choose from a number of different classes ranging from the standard tank, mage, rogue, and even a long-legged microwave because as everyone knows they are the ultimate evil in the world. There are quest markers littered around the world with both fun and terrible tasks to do, but they are only a veil for the same mechanics from the core game.

The attention to detail to give Goat MMO Simulator the guise of a real online game is quite something. Text chat comes up repeatedly giving the impression that you are in a world of fellow idiots wasting their precious time on something that really doesn’t deserve it. I will admit to be being amused by the chat panel and impressed that so much detail had been added in to create the illusion. With this much dedication to creating the appearance of an actual MMO, it makes the awfulness of the actual game so much starker. It’s hard to reconcile the idea that the developers wanted to create a deliberately terrible game and yet spent time creating the pretence of something bigger and better.

There are moments of real fun to be had. The maps are reasonably sized and exploration is encouraged. You can always find something to pique your interest to see what happens if you head-butt it. The gameplay is essentially a string of “what happens if I do this” and for the most part those instances are fun with the ridiculous ragdoll physics your goat has. The fun doesn’t last long though, once you have thrown your goat into the path of a speeding vehicle and launched it off the edge of a huge slide you have pretty much seen what the game as a whole has to offer.

Goat Simulator feels like it is a satirical game, but if you have to explain the joke then it isn’t a very good one, and asking people to part with their cash for it is a risky move. Of course, there are lots of technical issues, but like… uh… that’s the joke, right? I can’t escape the feeling that I am the butt (pun intended) of the joke. It’s supposed to be terrible, because it’s satire, but you reach a point where you begin to feel like the deliberate poor quality is an insult rather than a jape. I am ready to admit that perhaps I am not the target audience for this game, but it is hard for me to recommend what is essentially a silly little time filler, a curio at best and worth about five minutes of your time.

Funny (for about 5 minutes).
Silly time filler.
Excels at being absurd.

Jokes wear thin very quickly.
Naff physics are really naff.
It's a total waste of time.
Despite the amount of content it's all the same.

It's supposed to be terrible, because it's satire, but you reach a point where you begin to feel like the deliberate poor quality is an insult rather than a jape.