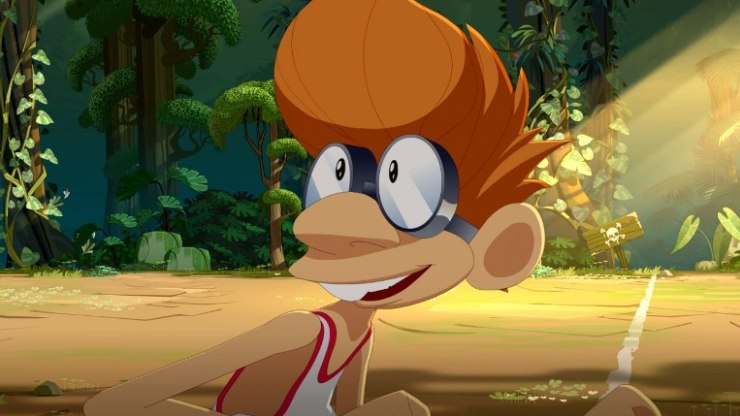 Underneath the hand-drawn art style and rather childish tale that forms the outer gloss of Harold, lies a game of incredible difficulty which is skilfully masked by its Asterix-like aesthetics. While Harold fails to push the boundaries a whole lot, it does succeed to be entertaining… at least for a while. Whereas difficulty can be a good thing — an element which keeps the player coming back for more — it felt the total opposite with Harold.

The basis of the game is this: as a player, you are in control of a guardian angel named Gabe tasked with guiding the titular Harold through a series of traps and puzzles as he races against five other competitors. The task is to “interfere” with the other racers (by setting off the traps early, cutting the ropes they’re about to swing on, that sort of thing) all while keeping Harold alive by navigating the traps himself and racing towards the finish line. I was about to say that it sounds simple enough on paper… but it really doesn’t. And it’s even more complex in-game, as you have so much to worry about. Eventually a mechanic where you can peek forward a section and set up traps before you get to them is introduced, which is where the game lost me – but not before it had my fingers tied in knots. Its unforgiving nature, as addictive as this trait can be in platformers, feels overdone and worth nothing in terms of reward: I wanted to turn the game off rather than keep playing.

As Gabe, you can use “puff powers” to speed Harold along, which can be collected by picking up two halos. These can either be used to increase Harold’s speed or resurrect him if it all goes a bit pear-shaped, which a bit imbalanced since in order to even come third in the races, you have to constantly be using all your puff powers for speed, but usually require at least one at any given point in order to come back when Harold dies.

Before races, you must go through each “stage” – a short section of the level, essentially – in order to practice, since the races are timed, which adds plenty of pressure. Playing through the level as a practice run is compulsory, with no option to go straight into the race without testing the waters first, which feels like a bit too much hand-holding for the hardcore gamers among us who like a challenge. Also, having to practice before hand gets a bit laborious, since chances are you’re going to be replaying it over and over from the beginning before getting it right anyway. One thing you must commend Harold on is its hand-drawn art style, which resembles that of early animation films, or an Adventures of Asterix comic. Each level is interluded by a comic short, and the humorous atmosphere of the game – mainly at the expense of the incredibly unlucky character of Harold – is entertaining, if not slightly juvenile at times. The worlds which form the settings of the races are well-crafted and look splendid, until it becomes apparent that Jungle 2 is virtually the exact same as Jungle 1 with a different trap set. However, the difficulty of the game combined with its animation style and child-like appeal make it difficult to interpret who the target audience actually is. It’s hardly the most accessible game either, requiring an astounding 4GB of hard drive space (for a bloody platformer, as well!).

In conclusion, Harold is a semi-entertaining romp through beautiful but recycled settings, with danger waiting at every turn. You get bored, then you get angry, then you get bored of being angry — only managing to be entertained if you can handle the difficulty. The story is as simple as they come, something which could have been more deeply explored to compliment the bold and comic-like graphics, and rapidly becomes staler than a week-old loaf. The game feels like it’s out to get you, and with so many mechanics to think about at once, it might be best to play with paracetamol and a damp cloth at the ready.

Harold is enjoyable enough, but the omnipresent AI, kindergarten story and the unshakable feeling of being unconquerable ruin the experience.