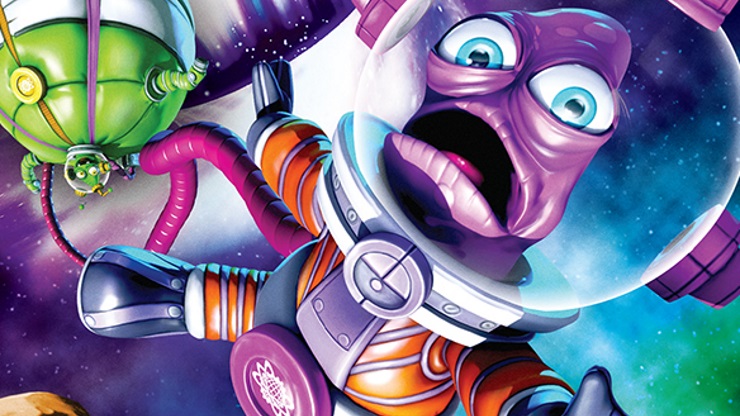 There was a time when games like Shiftlings could have been considered a rarity; you either played a platformer, or a puzzler, but a puzzle-platformer? Well, there’s a thing. Shiftlings is another dose of puzzly-platforming for your living room, coming in the form of a digital download. Published by Sierra (remember them?) and developed by Rock Pocket Games, here we have a title that implements the buddy-system mechanic we have seen a fair bit of in other titles of late.

Shiftlings focuses its attention on a pair of grey matter-deficient alien janitors, one of whom gets thirsty in the opening cut scene and downs a bottle of the galaxy’s fizziest drink. This gives our dimwitted friend some serious gas, and his space suit promptly swells up into a big puffy ball. Yep, that’s the level of humour on offer in Shiftlings – if it sounds lame, you have permission to stop reading. Still interested? Great, because Shiftlings has a lot to offer once you look past its obnoxious storytelling and forgettable characters. The low-level humour only really offends the senses during the cutscenes, which thankfully there aren’t too many of. The premise for the cutscenes, and indeed the game as a whole, is that the two janitors are the subject of a very popular TV show, hosted by a purple gentlemen who wouldn’t be at all out of place on 90’s kids TV. His voice is used in game, wherever possible, in an attempt to inject humour into a situation that would really be better off without it. Banal voiceovers are accompanied by a quickly tiresome, while jolly, soundtrack and an array of fart noises, squeaks and bangs. Shiftlings is very pleasing on the eye, with its abundance of colour and cuteness a feast for the eyes.

The gas emitted by the fizzy farting alien can be transferred via air-hose between the two on screen janitors. When one of the janitors is fat and, no doubt, feeling queezy, he is slow, heavy and unable to jump, while the other janitor is small, nimble and mobile. Using a combination of traditional platform elements and physics, it’s your job to guide the space janitors through various stages of increasing complexity. You are able to use the chubbier alien as a bouncy castle, so try imagining a high platform neither of our stinky friends can reach. Using the gassier of the two as a launch pad, you can send one of them up to the platform; now switch the gas to the guy up top, and send him over the edge of the platform, and because the two amigos are connected by a hose, the stranded chap is dragged up onto the platform, counter-balance style, and able to carry on puzzling. You can play the whole game in co-op, either locally or online, but you will need to have patience and good communication with your buddy, as getting everything lined up and timed perfectly in the more challenging sections can test the strongest of relationships. Playing in solo mode is fine, and when all of the elements line up, a large number of levels are genuinely enjoyable and satisfying.

There are 5 planets to visit, each with 10 levels that are supposed to get harder as you work your way through them. I didn’t always find this to be the case, however, as the difficulty tends to rise and fall randomly. Shiftlings doesn’t offer a whole lot of variety once you get through the first few planets, either, and by the time I’d finished my playthrough, I was definitely tired of the repetition – really, once you figure out the general pattern of moves, each level becomes something of a procession. Shiftlings is a puzzle-platformer that will be like Marmite in the mouths of most. If you can look past the toilet humour and daft presentation, there is a tasty little puzzler underneath. For everyone else, there are more refined and indeed better options for you spend your money on.

Clever use of its USP.
Nice to look at.
Plenty of levels to keep you busy.

A marmite-puzzler that some will adore, and others will despise. Despite that, it's a fun puzzler.