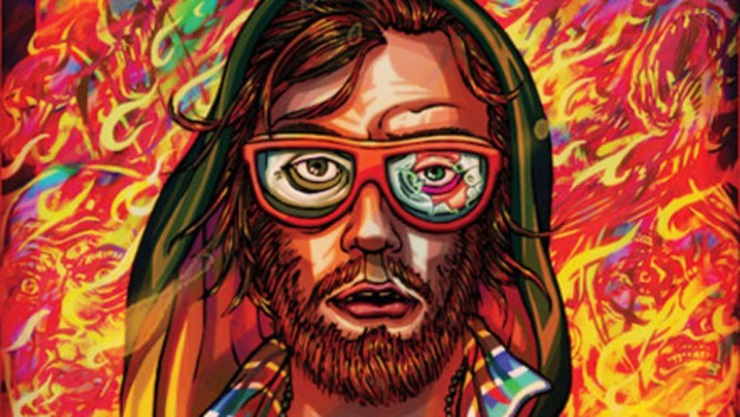 Hotline Miami exceeded all expectation. We all heralded the sublime gameplay, which resulted in the game playing public picking it up in their droves. Naturally enough, the hype surrounding one of 2012’s best has brought about a sequel: Hotline Miami 2: Wrong Number. It’s the same top-down murder simulator wherein you must enter a building and clear floor after floor of bad guys until they’re all left in a puddle of their own blood and, look, let’s be get this out of the way straight away: it’s fucking brilliant. There are times where it lacks the punch of the original, but come on, it’s Hotline Miami.

Jacket’s murder spree from Hotline Miami has gained infamy across America and he’s garnered fans and detractors in the process. Wrong Number takes place before and after Jacket began receiving the strange phone calls, and places you in multiple roles. There are a group of fans who idolise the actions of Jacket and pay homage to him through their vigilante night calls. As well as that, Detective Pardo is investigating Jacket’s murders, while a writer named Evan is putting together a book on the massacres. Many see Jacket’s bloodshed as deplorable, making it the perfect story for a movie called “Midnight Animal”. In the lead role is Martin Brown, an actor that is far from mentally stable, and being in the starring role doesn’t help him whatsoever. This is just a few of the characters and storylines throughout Wrong Number’s plot that will, at times, have you both chomping at the bit for more, but occasionally scratching your head. Being placed in different roles and having the timelines jump around as often as they do leads to it being difficult to figure out exactly where you are in the story, at points. Not always, but it’s certainly more muddled than it needs to be. Seeing how the events of Hotline Miami affect different parties is really intriguing and the sequel could’ve definitely benefited from more of a spotlight being put on certain threads rather than sharing with others.

One thing that does remain constant within the stories of Hotline Miami 2’s cast is the violence. This top-down, kill ‘em all brawler is doused in colour, yet crimson remains an ever-present. Although it may be hard to believe, Wrong Number is even more vicious than its predecessor. Swinging a baseball bat at someone’s head and watching as their body is instantly laid out on the floor, motionless, is both harrowing and satisfying. It’s unsettling due to how businesslike the whole ordeal is. Enter room, mercilessly murder all living things and leave. The gore has been dialed up. Animations of shoving a sharp piece of glass through an unsuspecting victim’s face, or mounting a downed assailant and pummeling them until their head has caved in are commonplace. Like the original, it’s a true testament to the skill of developer Dennaton Games that they can show such savage acts and have people question their moral compass, in an art style that wouldn’t be out of place on consoles from yesteryear. As far as twitch-based titles go, the Hotline Miami series is (without question) one of the best. You have to own every mistake because you’re given all the tools to succeed. Among the gore is strategy and if you fail to acknowledge that, you fail; full stop. Beginning a level is like sitting in the electric chair waiting for them to pull the lever: you’re going to die and there’s nothing you can do about it. However, it’s about taking the experience of previous runs and attempting to collate them into a master plan and execute that to perfection. Surveying an area is key. Behind door number one is a guy with a knife and a gun, but you only have your fists. You need to burst through the door, knocking down the shotgun-wielding foe first, then run over to the goon with a knife, dispose of him, then once you’ve grabbed the blade, slice the gun-touting gangster’s throat. Your adversaries are just as susceptible to the Grim Reaper’s scythe as you are, you just have to lose a few pints of blood before all that remains of them is their remains.

While the original saw you gain access to a number of different masks over time that gave you different abilities, Wrong Number is more restrictive because of the tale being told. Certain characters you control don’t wear masks at all, thus don’t have any special abilities. Of course, there are characters that do go incognito before entering a building of heavies and you’ll gain access to some perks like fists which kill on impact, or a roll dodge. Unlike the precursor though, you can’t run the gambit of masks whenever you like. The stages pertaining to the fan characters allow you to choose between four different masks, once you’ve unlocked them all. There’s another thread where you can wear another three different masks which, once again, gives you three different special abilities or weapons. There are other variables attached to different characters which give them a leg up on the situation too. Like the characters outlined, I’m scratching the surface here. As more time is spent with some of the characters than others, you’ll spend more time with certain abilities and when you take a liking to a particular mask, this is a dampener. With the narrative being told, it obviously couldn’t have allowed you to choose from all masks at any time, but it remains a drawback. I honestly didn’t think it was possible, but this soundtrack bests the original. Hearing a M|O|O|N, Perturbutor, or Carpenter Brut track kick in right before mowing down a floor of thugs is exhilarating. That driving old school techno, infused with some deep house is like nothing else in video games. The music is the driving force of Hotline Miami 2, whether that’s the thrill of a synth-based violation on your ears, or a down-tempo groove to reflect on your actions. A true masterpiece of cacophony.

This is how you create a sequel to one of the best games of the last number of years: you amp up everything. There’s even a level editor in here which will allow for people to create their own stages or mini Miami narratives. And while Wrong Number doesn’t always improve on what has come before, it comes damn close at points. Grab a weapon and get ready to worry about your state of mind because this is Hotline motherfucking Miami.

Slightly restrictive ability roll out.
Narrative has a tendency to get muddled.

Twitch-based gameplay at its finest, with some of the best music ever featured in a game. Wrong Number ramps everything up to varying degrees of success.

Hotline Miami 2 Is Getting A Level Editor