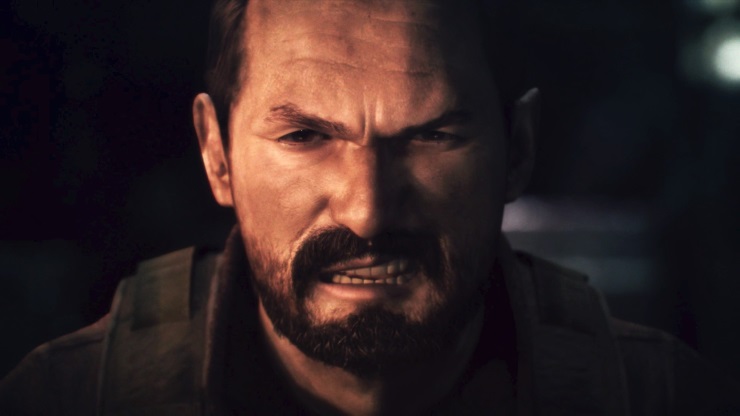 I still can’t quite get my head around how they’re doing it, but my time with Revelations 2 is just flying by. It’s probably because at a very base level, the gunplay satisfies in every way. Moreover, the story picks up this time, and throws firecrackers at you from every angle. The lengthier Claire chapter is full-on breakneck action, and there’s barely a second that goes by where you’re not firing your gun at something weird.

It’s a small complaint, but the new weapons to episode three don’t really add much variety, all of them being alternate versions of ones you’ve already upgraded and grown accustomed to. But the back-story from the books and notes you find is most welcome. In fact (and go with me on this, I’m almost scared to say it), as Barry’s chapter opens, there’s emotional resonance that I’ve not actually seen before in a Resi game. The coupling of circumstance and music make for a strong opening. Sadly, Barry’s chapter is (by far) his worse yet, purely because it’s tepid in comparison to Claire’s chapter. It’s just extremely slow, and although Capcom attempt to up the ante with a looming boss, after the first encounter (whereby it scarpers, the chicken-shit) the return leg is pretty much avoidable. The entire section revolves around powering up multiple conveyor belts in a disused mine area, and that final boss area also has a power-point. I’m not sure if you’re supposed to be able to dodge the battle entirely, but I did. Having died on my first attempt, I managed to use a smoke explosion to blind the enemies, and quickly get the power on and escape. Whether that’ll play into Claire’s final chapter or not is up for debate, but it seems unlikely.

The fact you are constantly finding BP that allows you to upgrade, combined with the weapon parts means you’re always upgrading. What this means is that a linear game with small areas becomes rewarding to explore. By the time I finished Claire’s chapter, and vanquished the gruesome boss, I had a Magnum that I could fire a charged shot with. Then, going into Barry’s chapter, I had unlocked the follow-up attack that applies to both Barry and Claire, and therefore could conserve ammo on crawling enemies, or ones I had simply downed. It’s all terribly satisfying. There’s a slight degree of cheese starting to appear in the dialogue (and the one-liners don’t hit anywhere near as well), but it’s Resident Evil – what do you expect? Elsewhere, the visuals are all the better for leaning harder on indoor areas, and the soundtrack continues to subtly impress, despite the overuse of a certain theme. Thankfully, the re-using of areas is minimal in this episode. In fact, there’s only really a single area (the sewers) that this happens with, and even then, it’s vastly different due to the time difference between the two sets of characters. While the bulk of Barry’s time is spent around the dusty mine, Claire visits a factory and a horrible abattoir, which (again) features an area that is strikingly similar to one also found in The Evil Within.

But there’s a real sense that Revelations 2 is building to the climax, though. Where episode two threatened to burst at the seams, it never truly exploded into full-on Resident Evil batshit nonsense like episode three does. If episode two was the duck confit starter, then episode three is the steak main course: riveting throughout and full of juicy action. Terrible metaphors aside, this is the longest episode yet, and took me well over two hours to get through – and that’s before you consider that each episode adds new Raid Mode content, giving you a tremendous amount of value for money.

I said it my review of episode two, but Capcom continue to impress, and have fully understood the episodic model. It’s simple: you deliver great content every week, and leave the audience wanting more. Revelations 2 has built to what I hope is a crescendo of narrative explosion, and it’ll only be a week-long wait to enjoy it.

Read our episode one and episode two review.

The longest episode yet, this picks up the ball and runs with it, and looks to be building to a tremendous finale.