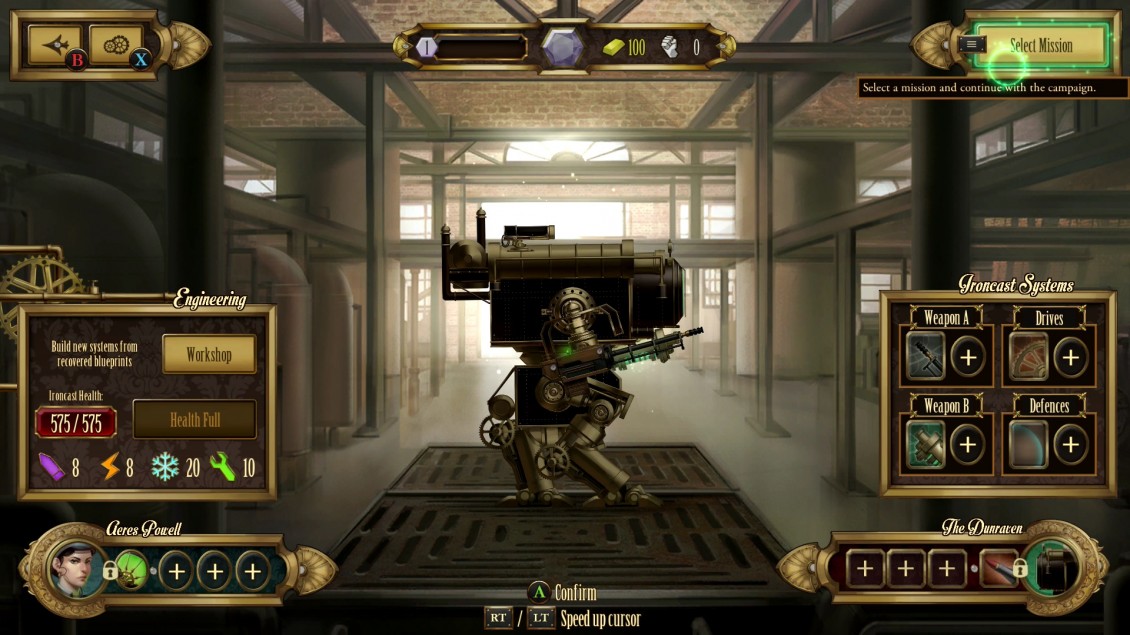 Ironcast is not quite the game that you might be expecting. When I first saw some screenshots for the console release of the game a few months back I was expecting a match three puzzle game of sorts with some strategy and story attached to it, something similar in nature to the excellent Puzzle Quest: Challenge of the Warlords released back in 2007. While it shares some similarities, Ironcast is not quite that. It’s more a strategy game that utilises the simple match three puzzle mechanic, and it is fiendishly difficult at times.

It’s also a roguelike: should you die, all your progress will reset upon death and you will have to start over again. The game, then, is a process of trial and error, learning the strategies over time and hoping that luck is also on your side. It is a steampunk delight, set in a bonkers alternative Victorian London in the midst of a war raging between Britain and France over some gubbins that powers the improbable Mechs that you are a commander of. Your task is to play your part in the war effort. Missions are varied, carrying out sortie missions to save caskets of tea (that bronze elixir that drives our brave troops) or to hold back advancing enemy tanks long enough for allies to escape, to destroying an enemy Mech hell bent on broadcasting valuable battle plans stolen from your allies. Each mission is a sequence of different tasks with an over-arching goal to stop the main advance on the enemy front. A campaign is split over a number of days with the enemy drawing closer to London, and you can choose which different missions you wish to complete which will provide you with XP, scrap materials with which to upgrade and modify your Mech, commendations and war points which will assist you with the end boss fight. Choosing missions is as much part of the strategy as that which is within each individual conflict, choosing missions with more war points will ensure that the boss battle is easier as it has already taken some damage, whilst gathering more scrap will enable you to better equip your Mech for future battles.

Battle is turn-based, and you have a number of resources to manage: your energy levels, weapons, coolant system and repair tools, as well as your movement ability and shield. Matching the coloured nodes on the grid will top up the different areas and you will have to pay close attention to each in order to win the battle. Moving and raising your shield uses your energy as well as reduces your coolant levels. Firing your weapons depletes your weapon resources and also your coolant. With each turn you can match up to three times, but fire or move as many times as your existing resources will allow.

At the end of each successful battle you are returned to your workshop to repair or fit your newly acquired gear. Each of these actions costs scrap which is acquired at the end of each mission or by matching nodes on the grid during the fight. This currency is hard to come by and due to the RNG of the roguelike aspect it is more than likely you will have to make a choice between spending your hard earned scrap on repair or using it all to retrofit the sweet new laser gun you acquired last battle, leaving your Ironcast in a damaged state for the next encounter. Initially the detail in the workshop area is a little confusing and it took me a few tries before I began to understand how best to utilise my resources to best prepare for the next battle. Each successful battle provides you with commendations which can also be acquired in the puzzle. Commendations are passive advantages for your pilot, active augmentations for the Mech, or unlockable weapons, shields and drives, as well as upgrades to the amount of power, coolant and repair nodes you can bank at any one time. The amount of customisation can become a little overwhelming and it takes time to understand the implication of each area before you can really begin to craft a Mech to suit a particular play style.

Visually, Ironcast is a little flat with not much diversity in the backgrounds or enemies and the dialogue could have done with a little more variety. With the frequent deaths it does become a little tedious to keep scrolling through the same dialogue at the start of each game, but it is a minor irritation in an otherwise engaging game. With its pick up and play simplicity belying a surprisingly deep level of customisation as well as a reasonably executed campaign, Ironcast is a good take on the strategy game.

Visuals are a bit flat.
No variation in dialogue.

Ironcast is a solid strategy game, easy mechanics and a deep level of customisation makes it worth coming back to.

Ironcast launch trailer revealed
Evil West | 6 Tips to get you started
Pokemon Scarlet and Violet Legendaries | How to find and unlock Legendary Pokemon
The Devil in Me | How to keep everyone alive
The Devil in Me | How to kill everyone
Escape Academy: Escape from Anti-Escape Island Complete Walkthrough
Escape Academy Take to the Skies Walkthrough
Social Media
SUBSCRIBE
All content copyright GodisaGeek.com
Fonts by Google Fonts. Icons by Fontello. Full Credits here »
Posting....