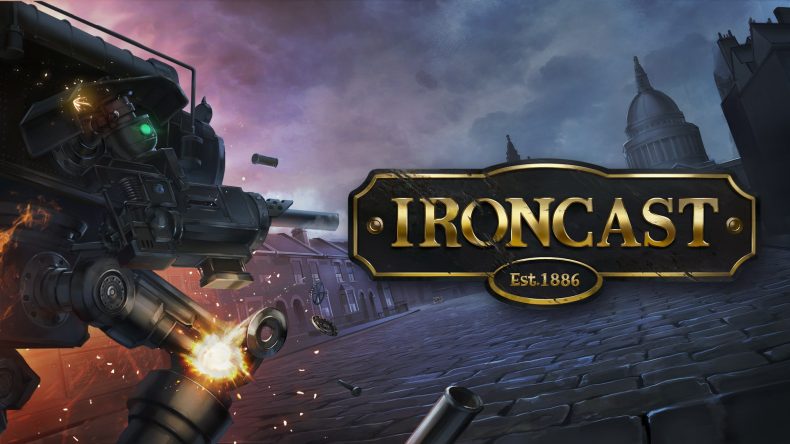 Back in 2014 it was announced that the UK government would start providing tax relief for UK developers making videogames, but any games had to display a certain degree of Britishness to qualify. So, here come the steampunk metal shoes of Guildford Developer Dreadbit’s Ironcast, a game that is unquestionably British.

Here you find yourself in a steampunk version of Victorian era south-east England, taking orders from a woman who looks eerily like Theresa May and trying to repel the French invasion from UK shores. The thing that makes this all incredibly, terribly British isn’t the mission where you have to recover tea or even the place names (I quite enjoyed seeing my home town’s name in the game), but in the way the Brits hate the French so much that they decided they’re better off telling them to get fucked despite the evidence of a bigger threat on the horizon, it’s like Steampunk Brexit.

The action involved sees the mech – or Ironcast if you will – you’re piloting up against one from the Gauls and separated by a grid of coloured icons which need to be matched to facilitate your actions, much in the way the Puzzle Quest games did. You’ll need to match ammo icons to be able to attack, energy to power your mobility engines and shields, repair to keep your Ironcast’s systems active and coolant to ensure your systems don’t overheat from use. You only have storage for finite amounts, but longer match chains grant more experience points and leveling up is something you sorely need to do here. As well as having an overall health pool, each Ironcast has four separate systems with their own health values, a weapon, sub-weapon, drive and shield; each of these can be individually targeted and destroyed to help give you the upper hand. Taking out the shield will mean your opponent’s defences are down, blow up their drive and they can’t move meaning your chance to hit will be higher, whereas destroying their weapons means they can’t hurt you. All damage taken is also taken in the overall health value, but while you can repair individual systems with green nodes you cannot repair your Ironcast’s hull.

Completing missions grants you scrap with can be used to repair damage your mech has taken, or used to build new systems to improve performance in battle. These missions come in five flavours: Battle is straightforward fight to the death, Trade requires you to convince someone to give you resources, Collection asks you to acquire a number of crates before your turns run out, Survival entrails lasting a certain amount of turns without dying, and Salvage, which is where you need to destroy the enemy without breaking a particular system of theirs. You also get manpower as well, which you’ll need as when you get to the boss the amount of manpower you accumulate will be taken off of their health bar, and considering the difficulty you’ll need all the help you can get.

Scrap is a fickle commodity in Ironcast – required for repairs and upgrades you’ll need lots of it, but it doesn’t really come in high enough quantities and regularly you’ll find yourself scrap poor and in need of repairs when you really want to use that brand new gun you just got the blueprint for. You also improve as you level up, with your Ironcast gaining more health, and an augmentation being unlocked, and while these can help, the difficulty curve is so steep that you’ll rarely notice the improvements they bestow upon you. Ironcast also suffers from the same issues the Puzzle Quest games did, in that your opponent always seems to have a much higher chance to hit, and also does more damage overall than you do, this is despite higher shield and evasion values, a challenge is one thing but this really just felt unfair. There’s a rogue-like element to Ironcast as well, with Game Over dumping you back at the title screen for a fresh start, you’re given commendation medals as compensation, with the quantity depending on how much XP you gained during your last campaign. This is used to open up new Ironcast, protagonists, base health and a whole load of other improvements to make your next campaign attempt easier. And you’ll be doing this a lot, I think I had to go back six times before I finally took out the first boss, while it’s compelling to improve your mech the inevitability of death sort of sours the experience somewhat.

Despite my frustrations, I really like Ironcast, but I’m always a sucker for games where you gradually upgrade something and you can see the fruits of that as you progress. Seeing your commendation medals rack up after a Game Over really gives the game a one-more-go factor, and while there’s a frustration in a loss you feel you didn’t deserve, there’s relish in mission success.

A decent strategy puzzle-RPG that displays all the good bits and mitigates the bad ones, pip pip.