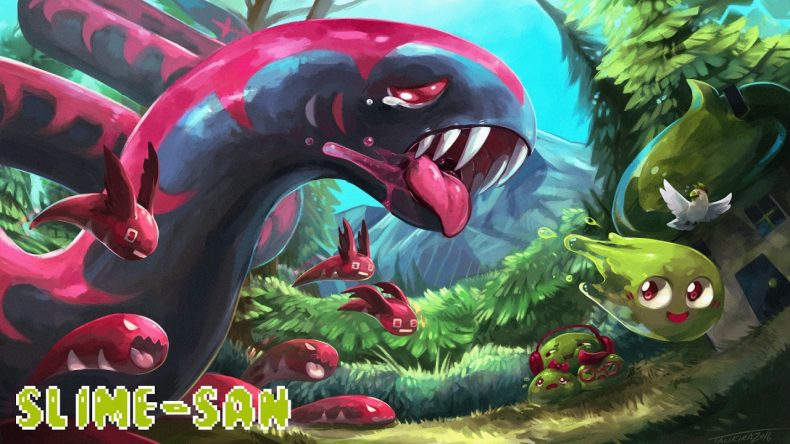 You know how it is, you’re wandering around after a good day at the office with your little bird friend. The sun is out and you decide to take a slightly longer route back home to the kids so you can enjoy the weather a bit longer, when all of a sudden you are swallowed by a giant worm. It’s a story we can all relate to, and makes Slime-san’s story of your usual everyman a much more personal tale.

Obviously I jest, I don’t know any sentient gelatinous blobs, and it’s likely you don’t either, and that’s why Slime-san’s rather silly premise doesn’t really matter in the face of its brand of running, jumping, dashing and phasing. In fact, if you’ve played Super Meat Boy you’ll be very much at home here as Slime-san borrows Edmund McMillen’s game’s core gameplay loop, but adds its own little flair to proceedings.

At all times Slime-san uses four colours for its palette (green, white, red, blue) and renders everything in a low-fi pixelated way. Screen furniture is kept to a minimum to ensure you don’t lose sight of the little slime ball and he trails his way around, jumping over saw blades, avoiding exploding balls and dashing through weak sections of wall. Our little Slime-san can also phase through similarly coloured sections and objects, and when he does so time slows down, giving yourself time to position yourself better to avoid incoming obstacles that might also be around your general vicinity. The worm you find yourself trapped in is divided into a series of levels which in turn are divided into small stages, filled with platforms, pitfalls, hazards, and one apple per stage to collect, but you need to hurry through as if you take too long the worm’s stomach acid starts to fill into the screen, and I shouldn’t need to tell you what happens if you get caught in it. To speed your way through you’ll need to figure out the best way to combine your abilities, such as falling through a platform, dashing through a wall and then jumping up to a moving platform without so much as a moment to catch breath, it creates a beautiful flow to proceedings much like the lovable meat sack I mentioned earlier.

The apples you pick up can be used to purchase different types of slime at Slumptown, each of which grants a handy ability while removing something else. Like you may get a double jump but find yourself unable to dash, or you’ll be able to jump higher and dash further but will not be able to walk. Other than that there’s a raft of aesthetic stuff you can apply to Slime-san or his small bird friend, and if this frenetic pace of the platforming is getting to you, you can take a nice relaxing stroll around Slime-san’s neighbourhood to see what his family is getting up to without him. For a small title, Slime-san does have a host of other modes. Upon completion you’ll unlock New Game Plus which remixes the levels for you, but more interesting are a series of speed running modes, like One Life which tasks you with getting as far as you can without dying (it’s hard, believe me), or making you pick up the apples before you move on. But, for those of us who are colourblind, Slime-san also has those people covered: the game comes with four separate colour modes, three outside the default, and each one catering to a different type of colourblindness. It’s only a small thing, but one that ensures that people with an often overlooked issue aren’t excluded from the game.

Slime-san is a tough but endearing speed-platformer. It’ll frustrate and please in equal measure, and while the aesthetic won’t be for everyone (in truth, I found it rather headache inducing) the extra colour schemes go some way to fixing that problem for you. Being inside a giant worm isn’t a pleasant place to be, but Slime-san is a great way to waste a few hours on a regular basis.