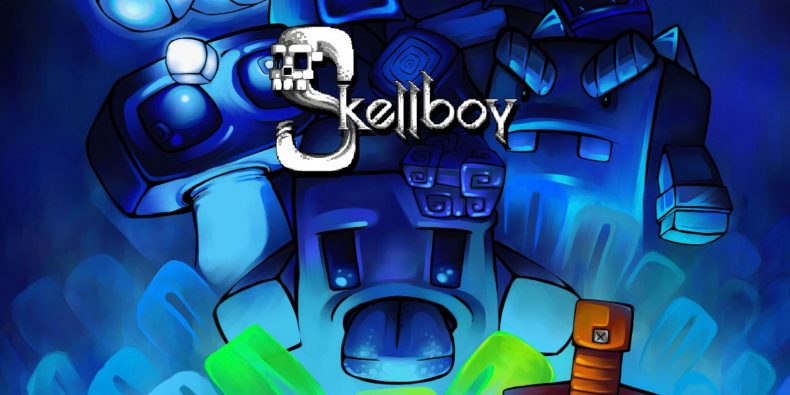 Skellboy is a game that, upon first glance, could be something special. An action-RPG with a colourful pleasing voxel world, cute animations and a bright, amusing tone, it starts off well. Sadly, uninspired combat and poor objective signposting take that initial sheen off.

You play the part of Skippy, a skeleton that has been raised from the dead to help defend the Cubold Kingdom from the rage of a spurned lover. Squarumon, the court wizard has gone mad after being rejected by the princess and has raised an undead army to wreak his vengeance. In all the ensuing confusion, the princess has gone missing as well. Things get off to a bit of a shaky start, as you would expect being undead yourself, but you quickly prove yourself by dispatching a swarm of zombie type creatures attacking the castle gates. From there you are tasked with saving the Kingdom and locating the lost Princess. The core gameplay has you traversing various locations fighting enemies, tackling the occasional boss fight and avoiding obstacles. There is very little by way of puzzle solving, which is a shame as things are a little bland without it. The combat is dull and uninspired, consisting purely of swinging your weapon in the general direction of the enemy. Skellboy does feature a variety of weapons that you can equip that are either dropped by enemies or found within the world. These range from swords to axes, to clubs and even lances, the latter of which can be thrown at enemies like a javelin. Aside from a few different speed animations, all of them function pretty much the same; some enemies may require you keeping your distance a little bit, but there isn’t enough distinction between enemy types warrant you concerning yourself overly with which weapon to utilise. Boss fights do mix things moderately, with each one requiring a specific way to defeat them, but they also expose just how imprecise and drab the combat is. There is just no weight or variance to it.

Presumably because Skippy is a skeleton and not held together with sinew and skin, he has the ability to interchange his body parts. Equipping different types will give you buffs or de-buffs depending on what it is. For example, equipping a zombie head will reduce your available lives, while the soldier boots will give you a knockback effect to your attacks. Others allow you to fire projectiles or provide you with a certain level of armour. Although these are fun to equip and collect, the stat changes still feel underwhelming. There’s a missing element within Skellboy that is required to elevate it, which is a shame because on the surface it really is extremely charming.

Skellboy is a bit of a treat to look at, with some pretty environments to explore. There’s an awful lot of humour to the animation and I was particularly taken with the way your 2D character turns or flips when he changes direction. There are some issues where you can get stuck in the environment a little. Early on, I somehow got wedged in an area in a dungeon. The 2D nature of your character combined with the isometric nature of the environment made it a little awkward to work out how to get out. There was some slowdown and freezing in handheld mode, but that was resolved thanks to a patch the game received. Exploration is a focus for Skellboy, and the environments do encourage it, but movement is quite slow dampening the enthusiasm to do so. There is quite a bit of interconnecting routes in the environments with shortcuts that you can open up for faster traversal at a later date, but that doesn’t negate how frustrating it is to move around in the world. Furthermore, at key points in the story you have to back-track to previously visited locations, and the signposting for this isn’t always obvious which means you could be trekking aimlessly for a little while wondering where you have to go next.

Despite attractive aesthetic and cute animations, Skellboy just doesn’t quite hit the mark. There is potential here, but for an action game it offers very little in terms of combat. The interchangeable body parts can mix things up a little bit, but ultimately without anything other than the ability to hit an enemy over and over with the same move there’s not much to keep you engaged. Skellboy isn’t terrible, by any stretch, but it is a rather bland.