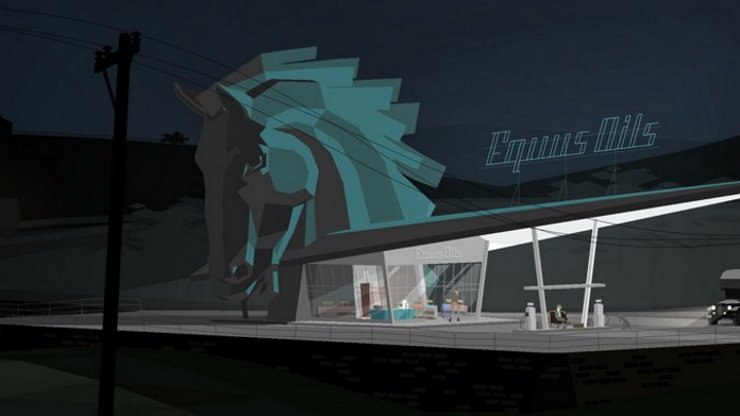 Kentucky Route Zero: TV Edition is an astonishing game, if “game” is what is can be called, because I have never played anything like it. It is mysterious and mercurial, skipping between different styles to confuse and misdirect. Time lines overlap, perspectives shift and it has you questioning what is real and what is not. At times it is deeply, almost painfully sad, but it is also filled with hope.

Cardboard Computer‘s drifter odyssey has taken almost seven years to complete with an episodic release of its story told over the course of five acts. The first act came out in 2013 with the conclusion seven years later in 2020. Kentucky Route Zero: TV Edition features all five acts plus the accompanying interlude sketches that help to fill out the main story and bring some of the themes into more focus. Loosely, Kentucky Route Zero is a point and click adventure, but without any formal puzzles for the player to solve, other than the complexity of the narrative. To call it a game feels trite, it is way more than that, it feels profound. It feels like art. At times it’s like a modernist play, almost Brechtian in its presentation. There is sparse scene setting and dramatic fades to black; in one of the interludes you even play the role of an audience member in a theatrical presentation of a bar, listening to the patrons talk about their crumbling lives and the impact modern society has had on them. At other times, Kentucky Route Zero is a like a dream, using motifs and imagery to suggest a supernatural or magical presence in the lives of the people you follow. It demands your attention, but at the same time doesn’t concern itself if you are not listening. And all of it is complemented by some extraordinarily beautiful visuals. The spaces feel huge with tiny, crudely drawn people in them. It often feels like a paper diorama with light and shadow used to create incredible depth. At times the camera shifts around the characters, making them seem powerful and fragile at the same time.

Primarily you are focused on Conway, a middle-aged man trying to make a delivery of antiques to 5 Dogwood Drive. But no-one seems to know where Dogwood Drive is, or if it even exists. If it does exist, the people Conway meets are certain that the only way to reach it is to follow the Zero, a mystical highway that seems to run through and under the state of Kentucky. Throughout the course of the five acts you watch Conway and the band of misfits who join him navigate through a world of confusion and sorrow filled with the memories and half remembered thoughts of people, who may or may not exist. The world of Kentucky Route Zero is filled with these people, or are they ghosts? People whose lives have been brutalised by the incessant progress of modern capitalism. There is an almost obsessive focus on analogue technology with radio static, tape players, even a theremin that I read as a nostalgia for a simpler past where technology was meant to enhance people’s lives, not destroy them in the pursuit of that progress. In Act 2, Conway and his companion from the first Act, Shannon, head to a bureaucratic nightmare housed inside an old cathedral to find someone who may know the where and when of the elusive Dogwood Drive. The cathedral is emblematic of the reverence assigned to the circular nonsense of endless form filling that has so impinged upon and detached itself from the lives of humans affected by it. It’s easy to make decisions about the fate of people if it is tied up in distant numbers and the blind following of a set of procedures, isn’t it?

The answer to this question and more does not come readily if at all. In fact, Kentucky Route Zero is a game that has you asking more questions than it answers. It wends and weaves around ideas and styles with dizzying effect. To describe it any more would do it a disservice and would ruin much of the magic in it. Kentucky Route Zero feels like the text of one of the great American novels, lamenting the past, the illusion of a dream. The American Dream. It is mournful, and beautiful and brilliant.