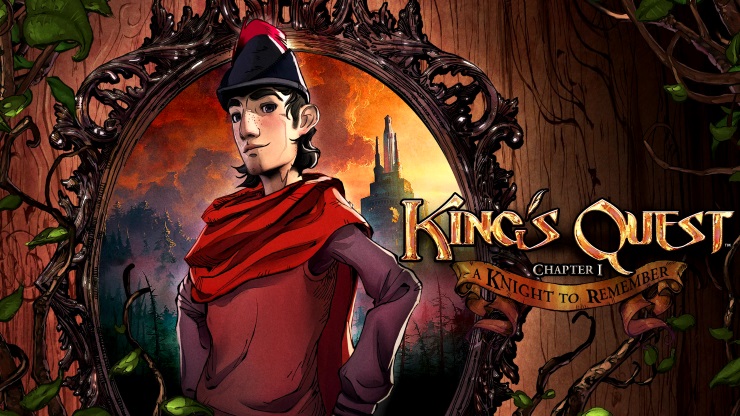 When the credits of A Knight to Remember roll, there’s a dedication (you know, like the ones you see in every book ever written) that simply says: “For Roberta, Kim, John and our childhoods”. It’s a warm message, one that makes you glow on the inside ever so slightly – and that’s pretty much how this new King’s Quest makes you feel all over: it’s simply a delight from start to finish, over the generous five or six hours it’ll take you to see the end.

Graham is an old man, sitting telling stories to his granddaughter, who (again, unlike today’s children if the negative vision of our society is to be believed) wants to hear what he has to say; she wants to hear his wisdom. Thankfully, no prior knowledge of the series is required (but there’s depth if you have it) because this is Graham telling his beginnings in Daventry as a young man trying to become a knight.

It’s a tale that rebuffs the dark, edgy nature of videogames in 2015, instead aiming for the soft underbelly that most people have hiding under the tough, leathery exterior. And yet, there are moments of peril, and sadness, which are so out of character with the rest of the story that they make you stop and feel for our protagonist. No longer is whimsy the order of the day; something serious has happened. Quickly the bright, colourful nature is returned. However, it’s interesting that The Odd Gentleman have the ability to take you there, but choose not to. Brilliantly, it’s also actually funny, and not just “videogame funny”. While you won’t laugh out loud for the entirety of A Knight to Remember, there are some terrific one liners that really catch you out. There’s one that’s a nod to Telltale Games’ popularised take on the point and click adventure game that is superb, and elder Graham’s narration being so chock-full of terrible puns is excellent, and shoot me if I didn’t laugh at a few of them.

You have direct control over young Graham with the left analog stick, and the only other inputs you need are the A button (action) and the X button (inventory). Much of your time will be spend wandering around solving puzzles (none of which are particularly hard) and helping out the townsfolk. But the real killer here is that choice appears to matter in a way I’ve not seen in the genre in quite some time.

The opening main quest is that you need to find a monster’s eye to prove your worth as a knight. By the time you’ve adventured around and gathered your bearings, you’ll have the solution to three puzzles, all of which will gain you the eye you need. The choices made me want to replay it all and see how it could have played out, and this appears to be an ideal underpinning the whole narrative. There’s a feeling that you are shaping Graham’s personality: you are hit over the head with the ideals of three sets of residents, all of whom have different beliefs about how things should be run. You can side with them, and it leaves me wondering if this will have a greater impact as the chapters go on. The voice acting is superb, and Christopher Lloyd’s (yes, Doc Brown) old Graham is utterly on point. But the supporting cast is excellent, too. The guards around Daventry are unique and weird, and you’ll happily stand around listening to them chatter away. Whisper is one of the would-be knights you are competing with, and he’s hilarious as well. His cries of “Whisper can do it!” never get old, and the resolution of his storyline is one of the high points. It gets better: one of the peripheral characters is voice by Tom Kenny (Spongebob Squarepants, The Ice King from Adventure Time, Heffer from Rocko’s Modern Life), for goodness sake. Even Wallace Shawn and Zelda Williams turn up and do a cracking job.

Of course, it’s gorgeous to look at. Fairy tale kingdoms have never looked this good. The bright appearance works wonders at keeping you engaged. Comic-book like characters and interesting back-stories mean that there’s never a dull moment. This is a game ripe for taking screenshots of, and using as your desktop wallpaper. But there are negatives, and the loading times are some of the most frustrating I’ve seen in a modern game. Each screen has been meticulously designed, so when you walk off in one direction, a new screen appears. Sometimes, with no warning, there will be a loading screen of anywhere from five to twenty seconds. It’s utterly bizarre: you’ll go four screens without a load, then suddenly it’ll load two screens on the trot. Then, bizarrely, it’ll need to load again, even though you are only going back a single screen, and to one you were just on. On the Xbox One version, there’s some tearing, too, but it’s not horrendous, and mostly occurs during the first-person scenes (of which there are few) that involve you choosing something.

A Knight to Remember is a wonderful, mostly self-enclosed story that leaves you looking forward to the next chapter – it’s one that feels as though it came at just the right time. Ignoring the gritty, violent nature that most others are chasing, King’s Quest is a whimsical, aesthetically pleasing, funny take on a genre that is all about the characters. For our childhoods indeed, and long may it continue, as this is one nostalgic journey that’s well worth it.

Loading times are frustrating.
A bit of screen tearing.

A warm, witty adventure game that focuses on giving you control, while telling a good story. The return of King's Quest is only let down by some bizarre technical issues.