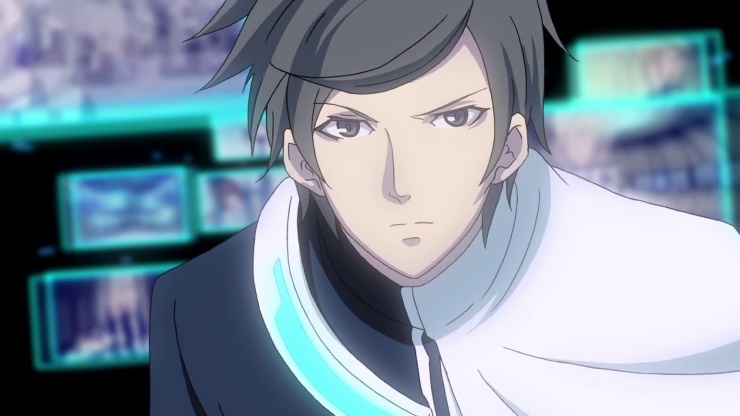 Lost Dimension’s first impression is of a tired game. The genre it belongs to has been done so many times the same way it has become stale, and desperately needs innovation. You wonder if it is something that developer Lancarse has simply decided to ignore in the hope that the fanbase will love it anyway. The fact remains that there’s still a large appetite for this type of tactical role-playing game. The decision to be made is whether you need Lost Dimension to be in your collection, or if your can happily ignore it.

You play the 18-year-old Sho Kasugai, a member of the elite team of S.E.A.L.E.D, who with eleven others aim to bring about the downfall of the mysterious ‘The End’. This force of evil has threatened to hide the car keys of everyone in the world who has an important meeting or appointment to attend, thus bringing the world into the grip of chaos and destruction. Only the brave team, headed by Sho, can stop this in time.

Okay, so that isn’t strictly true, but do we really need yet another end of the world scenario? I’m being harsh here because there are things within Lost Dimension that work very well and are very enjoyable to play. Game time is split into three main parts, including one part where you spend time in a huge pillar with your fellow teammates. Here you can buy and upgrade equipment, develop your special skills and interact with your team to find out their thoughts and feelings. The second part of the game is an arena battle, where you and five other chosen members of the team will aim to clear out an area of opponents. The final part is where Lost Dimension strives to make a difference by making you choose a traitor amongst your group and have them eliminated from the game. The intention is to put you in situations where you have no choice but to consider voting for someone who you have trusted up until now. It adds a welcome change to the normal role playing menu.

Resting time in The Pillar was my favourite part of the game in terms of presentation and character development. Dialogue is presented with the usual “slightly animated characters with subtitles underneath” affair, however the voice acting for the characters is highly entertaining and for the most part unmissable. Firstly because there are moments that are genuinely funny. Mana Kawai with her English accent is one of my favourites, completely happy to call people ‘Wankers’ while explaining to you her reasons for preferring to be a brawler over using a weapon. Teammates become more or less friendly depending on how often you have used them in battle, with some even happy to have private conversations away from the group. This helps to build up more trust with them, which becomes important when you head out into the arena to battle. Strong relationships mean that your teammates will provide an additional attack if they’re close to you in the heat of battle. Less friendly companions will keep their interactions to the minimum, and are less likely to help out in a tight spot. You will also be given the chance to buy new equipment as well as dissolve existing equipment, and improve the gifts that every character has that they will use in battle. Battles are arena-based affairs where you decide which five team members will join you and which position they will start off in. Considering where we are in the Playstation 3’s lifecycle, the graphics in Lost Dimension are weak at best. Bland and uninspired backgrounds will host a set of fairly bog-standard, genre-tired enemies with little imagination behind them. There are the soldier ones, the floating ones, the quick stealthy ones and the bigger “tough” enemies to deal with. Combat allows you to move and then perform an action, and charging into battle without the help of your team or forward planning is not advisable. Your characters will be easily wiped out if they decide to go it alone, and keeping any distance between allies means it’s difficult for them to use any of the additional skills available to them. As well as the automatic Assist that will make one of your teammates attack your target providing they’re on speaking terms with you, you can also Defer your turn to another character to allow them to use another action. You can always use your own Gift, which is essentially your character’s special skill. This can do anything from healing to launching a devastating attack against a group of enemies. However, you have a limit on how often you can use it.

Everyone has a measured level of Sanity, and if this drops to zero then the ally will start to attack randomly, even other allies if they are too close. It stops you from spamming your Gift attacks too many times and encourages you to use all the various skills within your team’s roster. At some points you might need to have your character just rest in order to keep you sane. I never found combat to be a major challenge, as long as I exercised restraint and made sure everyone stuck together and I stocked up on the standard menu of healing and restoration items.

What helps to drag Lost Dimension up by its ears is the Traitor mechanic that comes into play as soon as you have tackled a couple of arenas. Every time you want to move up a floor, you need to erase a team member. Erased team members leave behind Materia that can be given to other players so your don’t lose their powers. Sho has the ability to question characters to find out if they are traitors by playing through a minigame which will reveal if they are in fact allies or not. You also have the ability to analyse what certain members of the team think of their counterparts in order to help you make your decision. Once you head off to the Judgement Room, everyone takes a vote on the three players who are the likeliest suspects and the person with the most votes is erased, with no way to bring them back. It helps to add considerably more tension than the lacklustre combat sections of the game and, since the traitor isn’t fixed from game to game, does encourage you to replay through from the beginning. What makes this process more painful is the investment you will have in each of the characters as the game progresses, as you find out more about their reasons and motivations for being part of S.E.A.L.E.D. At some point you will be responsible for erasing a member you had a real bond, with and this elevates the game to a another level.

Even with the addition of the Traitor mechanic, Lost Dimension falls into the “seen it all before” category of role playing games. With graphics that are aged even before they hit your screen, and combat that does little to add to the genre or move it forward, it’s only the substantial work that has gone into the characterisation and team interaction that makes Lost Dimension worth devoting some time to. It is there that you’ll find the real enjoyment and fun that Lancarse intended.

This review is based on North American code, so there may be differences when the EU version is released.

Even with the addition of the Traitor mechanic, Lost Dimension falls into the "mostly seen it all before" category of role playing games.