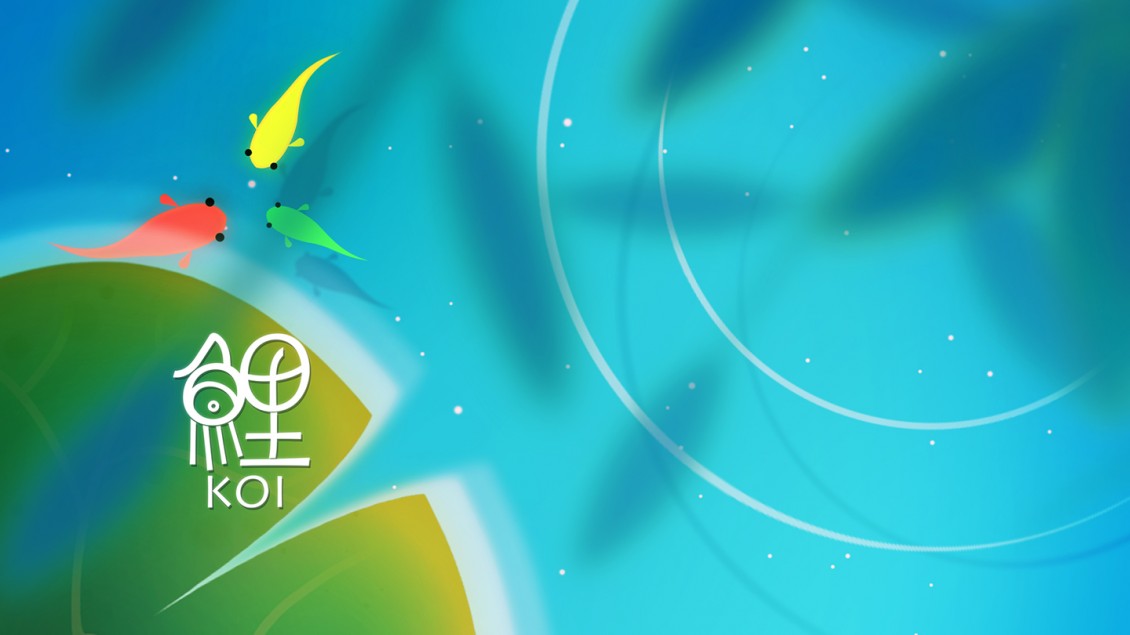 Koi, a game developed in Unity by Chinese developer, Dotoyou, marks its place in history as the first Chinese developed game released to the Western market on the PS4. It’s an oddly soothing game about a Koi fish on a mission to restore the beauty and tranquillity to the lotus pond that is its home.

Strongly reminiscent of thatgamecompany’s games, Koi seeks to emulate the same mechanisms that made Flower and its successor, the wonderful Journey, such interesting and thought provoking experiences. Upon loading you are greeted with an appealingly simple screen with minimal instruction and that aesthetic is carried forward into the game itself. It is beautifully and elegantly presented with simple shapes and a soft palette, raindrops fall slowly disrupting the surface of the water creating pleasing concentric circles, and the music is gentle and soothing. As you move about the world, the Koi may bump in to objects and I was particularly struck by the clever feedback using the rumble function in the controller: gently nudge the Koi against a pebble and the controller will vibrate resembling the actual feeling on your hand should a fish touch you water, it was surprising and made the game feel almost tactile.

The simplicity of the presentation is carried forward to the controls which are also minimal. You thumb the left stick to move and press square to interact with objects, if you get stuck where to go hints are provided by pressing either of the trigger controls. Your goal is straightforward as well, you must navigate the pond to correct and restore the negative influence that humans have had on the tiny eco-system. The idea is to make the various lotus flowers bloom again by locating tiny fish of corresponding colour. A pink lotus flower? You will need to find and return a pink fish. There are various obstacles and puzzles and some collectible items which help to flesh out the story along the way, but other than that it is a fairly linear journey. There are perils in the water, corrupted fish patrol areas and you will need to avoid their vision (handily highlighted with a vision cone) and lead your charges to the safety of their corresponding flower. Being seen by one of the corrupted fish won’t kill you, only stun you briefly and mean that you will lose the thrall of the smaller fish and will have to locate them again. In later levels vision is obscured by dirty water, and obstacles are the detritus of humans that you will need to navigate. Perils increase as well with exposed electrical wiring that will electrocute and stun your Koi and strong currents that will sweep you and your charges further back in the level meaning you will have to run the gauntlet again, but none of it is challenging or frustrating.

Occasionally you will stumble on a puzzle which is oddly placed and not at all consistent. For example, the tiny coloured fish you require may be held behind a branch that you need to remove. The solution is a kind of “Simon Says” game where you must replicate the pattern of moves across the leaves of the branch. Sounds simple, but rather than using colour and sound to assist you in the memory game, each leaf is green and the sequence runs over three sets with each sequence getting longer, with up to as many as eight moves. If you fail; start again. It’s potentially a rather punishing puzzle for someone with poor memory or aural capability and could frustrate. Other puzzles include a variation on a match two game and a picture puzzle to re-arrange the pieces to make sense of the image. These are oddly placed and jarring as they bear no context to what has happened before, and stranger still, they’re not repeated as you move forward. There is more to do, as little jigsaw pieces are hidden in the level which in turn combine to make a picture that illustrates the backstory in more detail, and every level has stars to find as well, but other than trying to locate these there is very little in terms of replayability over the eight levels which will take you well under two hours to complete. It’s astonishing then to see that one of the trophies for Koi is to hit 24 hours of game time! It’s this one trophy which I think encapsulates the problems that Koi has. Clearly the developer wanted to create a message with Koi. In much the same way that Flower conveyed the idea of the tension between human industry and the impact that has on the environment, Koi seeks to present that same message. That message is lost though, there is no explanation of the story other than in the collectible pieces you find, and the very last level seems aimless, grasping at some existentialist meaning and the power of the cosmic that the rest of the game hasn’t adequately built up to.

Koi feels like a game that has ideas and a message, but none of it is fully realised and I think ultimately it fails in its purpose. The ambiguity of what Koi wants to be is mirrored in its clumsy exposition with puzzles that seem out of place and oddly integrated. That said, it is a beautiful, soft and serene game to while away an hour or two.

Koi is a beautiful, soft and serene game that doesn't quite manage to fulfil the ideas and message it is clearly trying to convey.