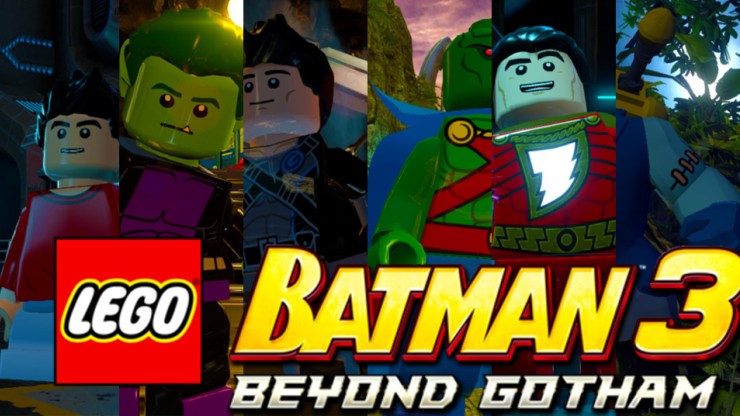 I could start this review by simply saying, “Another year, another Lego game”, but I’d be telling a lie. Mainly because there have been a number of them already released in 2014. Then, why is it that after years and years of the exact same formula, the Lego series doesn’t suffer the wrath of the video game playing public? Well, because they’re generally fun! Sure, some changes would be welcome to freshen things up and take the series out of its comfort zone, but it can’t be denied that, for the most part, you’ll play with a smile on your face. Lego Batman 3: Beyond Gotham is no different.

Brainiac, using his shrink-ray and the power contained within the many Lanterns’ rings, is planning on collecting worlds across the galaxy and Batman, along with his multitudinous allies, must stop the extraterrestrial android’s evil plot. As Brainiac is predominantly known as one of Clark Kent’s foes, Lego Batman 3: Beyond Gotham really does come good on its subtitle. While the previous releases in the series saw some characters in the DC universe crossover into The Caped Crusader’s world, this goes all out. From Superman, Wonder Woman, and Green Lantern, to Martian Manhunter, Cyborg and The Flash, this is a DC fan’s dream. While Marvel rake in the cash at the box office and make household names out of Black Widow and Nick Fury, DC’s lagging a bit behind, meaning that a few of the cast members here won’t be instantly recognisable to the general populous. One of Lego Batman 3’s problems is that for the first couple of hours, new character introductions are sparse and then there’s a flood of superhero arrivals, which could lead to the uninitiated becoming overwhelmed. The comic-book aficionados, though, will eat it up and those that are new to the wider DC universe can get to know the likes of Solomon Grundy and Firefly.

However, casual DC fans will certainly be able to appreciate the differing abilities of the various playable characters. The Flash’s speed allows him to travel across an area at an impressive pace, Wonder Woman can fly at a moment’s notice (which also triggers the old Wonder Woman theme to play) and Robin’s array of suits are enough to tackle all manner of situations. Some of the characters’ abilities overlap, but enough of them change things up so you can take down the bad guys with whatever power you wish. The Lego audience ranges from the very young to the more senior in age, and while the more youthful may have a bit of difficulty with Joker’s goons, there’s the potential that some of the older generation will find it a little button-mashy; particularly when death holds no value whatsoever due to instant respawns. The fun comes in playing with the copious powers of the latex-wearing crimefighters, rather than the challenge your adversaries pose. As Lego games with multiple playable characters have shown us over the years, its not just in combat and exploration where you’ll be able to mess around with the cast’s different abilities; you’ll also have to call upon specific superheroes when it comes to the puzzles. Like the combat though, the challenge is minimal and bordering on too familiar. Demolish a load of structures, look out for hopping, glowing bricks, then hold down the B/Circle button and wait for your avatar to complete building some object or piece of equipment that can advance the story. The repetition can become jarring, especially as this has been the template for so long. After the first few hours, though, Lego Batman 3 becomes far more enjoyable.

At the beginning, you’ll trudge across a few dark, spacey environments, devoid of much life. Then as the game opens up, you’ll be able to visit the Lanterns’ planets, as well as walk the streets of some of Europe’s most famous cities. These are welcome after such a visually dull beginning. It’s in the second half of Beyond Gotham where you truly get to see some delightful surroundings that bring about plenty of grinning as you see a Lego Eiffel Tower, for example. And as you’d expect, the script is delivered quite well, with plenty of comedy that all ages can enjoy, barring the very rare cringeworthy lines. And to be honest, those can even be enjoyable when in the right frame of mind.

Unlike Lego Batman 2, Beyond Gotham isn’t an open-world adventure. It’s linear format feels more focussed, quite frankly. There are hub areas like the Batcave and the Watchtower, where you can collect bricks and there’s the trophy room where you can have a look at your collectibles – and if you’re the completionist type, you’ll have a lot. There are Adam Wests to save in levels, gold bricks to collect and a ridiculous amount of characters. Literally hundreds. Plus, in the story mode, some levels will have certain areas that can’t be accessed by the characters you may be using at the time – yet in free play, you can go back to stages that you’ve already played and hand-pick from the roster available to you and uncover any of the secrets Lego Batman 3 has to offer.

The formula may not be broken, but as time goes on, it’s becoming a little bit too samey. The combat remains fairly simplistic, as do the puzzles, which could see boring grown-ups yawning, while the bright-eyed and non-cynical kids lap it up – but at this stage, I think a few of them might even be looking for something new. However, comic-book connoisseurs will love the constant stream of (mostly) recognisable characters and those of us that might not be as well informed can see this as an introduction. It takes a few hours to come out, but Lego Batman 3’s personality is truly wonderful and is where the aforementioned age gap is irrelevant. It’s a Lego game, for God’s sake. Smile.

If you’ve played a Lego game before, you know what to expect. It’s full of charm and wit, while lacking much innovation.

You may also like
Lego BatmanLEGO Batman 3: Beyond Gotham