previous
Rollers of the Realm Review
random
next
LEGO Batman 3: Beyond Gotham Review
1 like 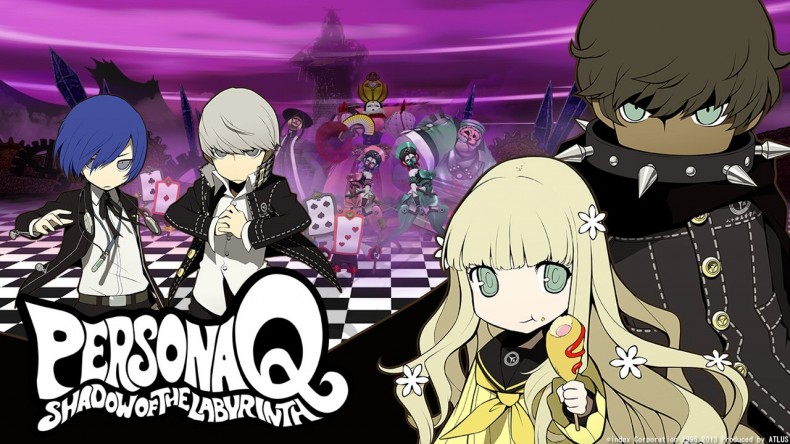 I can’t believe it has been nearly a year since Persona Q: Shadow of the Labyrinth was shown off for the first time. To begin with it seemed it was just a bare-bones cash aimed at the Persona 3 and 4 fandoms. I’m glad Atlus proved me completely wrong. Persona Q, called so as a throwback to the Japanese name for Etrian Odyssey, successfully takes brilliant first person dungeon crawling and serves it to you with a generous helping of Persona.

Persona Q’s story is canon and takes place in a time paradox. The Persona 4 cast enters the velvet room on the final day of Yasogami High’s culture festival; the Persona 3 cast, on the other hand, gets teleported to the velvet room from Tartarus. All the velvet room residents are present from both games barring Igor (who is mysteriously absent here). Margeret, Elizabeth, Theo and Marie are also teleported along with their respective casts into this strange version of Yasogami High. The protagonist you select decides when you meet the two new characters Rei and Zen. Both Rei and Zen have lost their memories but they decide to join you and your party to figure out what’s happening in the strange school and why they are trapped there. Your protagonist isn’t voiced so if you want to listen to Yu Narukami (the Persona 4 protagonist), you will need to take the Persona 3 route.

The plot primarily revolves around Rei and Zen, with the rest of the cast providing little but short dialogues. Teddie is reduced to just hitting on the girls and getting rejected every time, something that quickly gets old. Among the high points are the interactions between characters from Persona 3 and Persona 4. It almost feels like a dream come true, even if some characters are sadly underused.

The chibi art style is in stark contrast to 3 and 4. While the characters do end up looking cute or cuter in some cases, the disparity between the actual Persona designs and the characters is somewhat off putting. After an hour or so you stop noticing the different art style and it just feels like a new adventure for the characters you have grown to love over the last few years. Visuals are top notch overall with excellent interface elements and battle animations, and you can tell this was a labour of love. The attention to detail is mind-blowing. Even small things like cycling through the menus has characters interacting with each other in the background. I left the menu active just to see Koromaru chase Teddie for a minute. It was hilarious.

Movement in Persona Q’s labyrinths is grid based and marking things and drawing your map is essential. The game perfectly suits the 3DS with the dual screen setup. In the labyrinth you always need access to the map and having it on the bottom screen at all times is very handy. While Persona Q does have an auto map mode, you still need to mark doors, chests, and other points of interest. The number of markers and colours available make using the map a breeze. As the plot progresses, the labyrinths get significantly more difficult and the spike may be off putting if you’re used to a cakewalk and just mashing random skills at enemies. As with Etrian Odyssey, Labyrinths have power spots that give you specific items you can sell later. Each labyrinth has its own unique look and puzzle elements. Luckily, almost all the labyrinth music is well done and doesn’t really feel monotonous like Tartarus in Persona 3.

There are also FOEs, visible enemies who stalk the labyrinths as opposed to the random encountered. A FOE will usually destroy your full party and make you regret waking up in the morning; they are extremely difficult and should only be engaged when you’ve spent a considerable amount of time levelling up. Each floor introduces new FOEs and puzzles around them. A single wrong move will have you facing off against two FOEs at once which is basically the worst thing in the world, and trying to solve difficult FOE puzzles with random encounters every 20 or so steps makes for quite a challenge. Luckily, almost every dead end in a labyrinth is accompanied by an event between the characters. These events serve as nice breathers in an otherwise laborious process as you get towards the latter dungeons.

The battle mechanics are perfectly implemented. The party system lets you create a group of up to 5 people (6 if you don’t count Rei and Zen as a single unit), with members arranged in the front or back row depending on their abilities (members in the back row take less damage overall). Your protagonist acts as the leader, and if you have protagonists from both 3 and 4 in your party, one will become the the Vice Leader. Unlike previous games wherein only the protagonist could use multiple personas, Persona Q lets every party member have a main and sub persona, which is a godsend early on in the game. The sub persona’s health and SP are added to yours and their skills are available in a similar fashion to the main characters in Persona 3 and 4, allowing for greater flexibility. You get persona cards randomly after certain enemy encounters and if you have what it takes to defeat a FOE, higher level persona cards are dropped with rare items. The various forms of fusion get unlocked as the game progresses and you really need to fuse as much as you can because the personas stop gaining new skills after a certain point. Normal fusion seems a tad nerfed and I often found myself resorting to fusing three personas together. Characters can use personas of a higher level as sub personas but fusion is limited to the leader level.

Battles are all about finding the enemy’s weakness and conserving SP. I cannot stress this enough. Persona 4 Golden let you steamroll most enemies without bothering with weaknesses, but Persona Q is unforgiving in the normal and harder modes. You will get wiped out if you aren’t careful and items that replenish SP are only available much later in the game. The “One More” system from Persona 3 and 4 has been replaced with a boost system, so your character goes into a boosted state when you trigger the enemy’s weakness, and the next skill costs 0 HP or 0 SP. If the character is attacked, the boosted state goes away. The more you attack enemies, the more the party skill gauge fills up on the right of the screen. This lets your main character or leader perform specific leader skills. These can be very useful right from early on in the game. My first play-through was the Persona 4 side and the leader skill let me ensure a certain character got to attack first. This used up 1 full bar of the party skill.

There are other skills that use up more and you can store up to 5 levels of the party skill gauge for use later. I unlocked a skill that let me flee the battle and teleport to the floor’s entrance and I can’t emphasise how important this was during puzzles where FOEs tried to corner me. The end of a dungeon always has a boss fight and the boss design is great; some even have voice acting and each battle is unique.

Apart from the labyrinth and battles, there’s a decent amount of stuff to do (this is a Persona game after all). Social links have been completely removed, but before you raise your pitchforks, there’s a new Stroll option in the menu that lets you view various story-related events as they take place. The items found in power spots and those dropped from enemy shadows are sold in the Workshop to unlock weapons and items. The Nurse’s office is the only place you can get your party healed (you pay depending on your level each time) and early on this is the only place you really get to replenish your SP. If you carelessly use expensive skills, you will find yourself unable to perform anything but basic attacks towards the middle or end of a floor. You also get access to a variety of side quests here, ranging from enemy hunts to character events that reward you in both experience and items. These quests are really useful for levelling up early on and some of them even involve visual novel elements with choices that affect the quest outcome.

Persona games are known for amazing soundtracks and Persona Q is no exception. Everything from the boss battle music to the event music is really great, and the final dungeon music in particular deserves a special mention. The voice acting in the trailers really does not do justice to how good it is in the game. It may feel off at first but it quickly reaches the quality I have come to expect from Atlus.

Persona Q: Shadow of the Labyrinth is not a perfect game – the difficulty spikes make the exercise of dungeon crawling more laborious, though thankfully you can switch the difficulty on the fly – but overall I’ve come away with almost nothing but good things to say about the experience. People expecting a game exactly like Persona 3 and 4 will no doubt be disappointed, as Persona Q at its heart is a first person dungeon crawler. It feels like a gateway game into the Etrian Odyssey series rather than Persona, and I don’t recommend it to anyone who hasn’t played both Persona 3 and 4. For fans of both games, it’s a love letter from Atlus delivered in a spectacular package.

An amazing first person dungeon crawler for fans of Persona 3 and 4, but not a gateway into the Persona series.