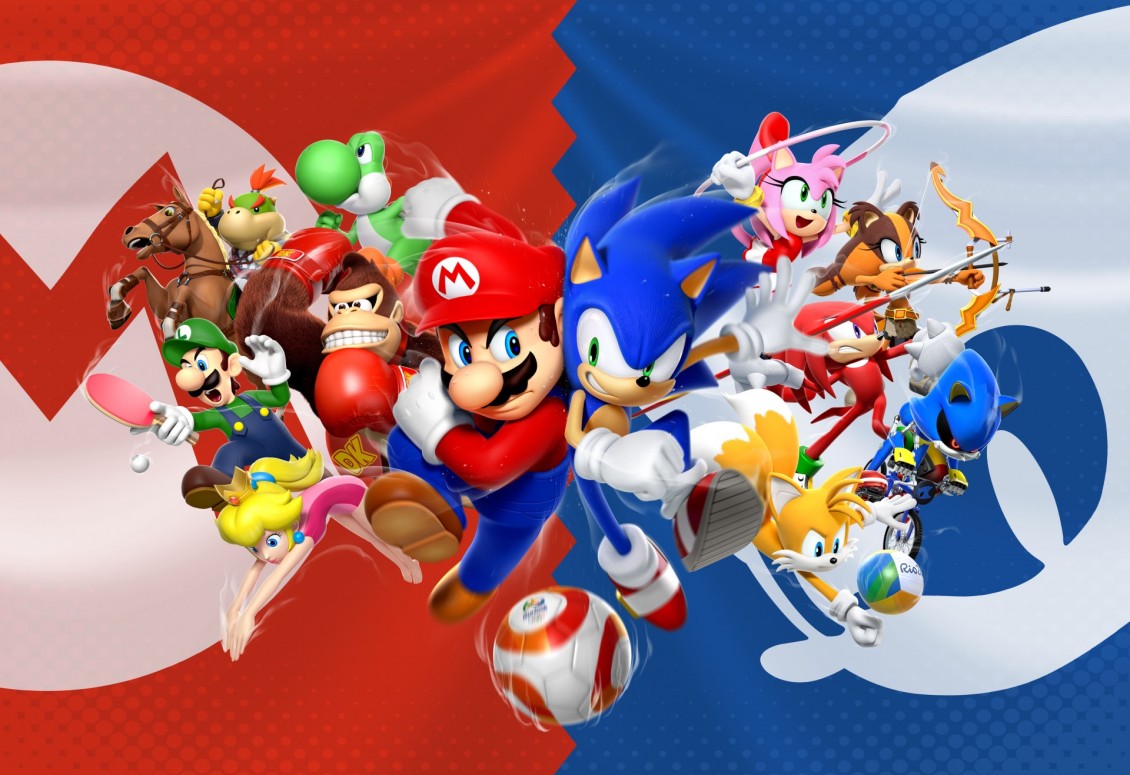 If you were playing videogames in the 80s and 90s you would obviously know about the rivalry between SEGA and Nintendo, and especially their two mascots Sonic and Mario. Times have moved on since then, SEGA are out of the console game and Mario and Sonic now star in games together.

That’s not to say the rivalry has ended, though, oh no. The games in which they feature together have all been competitive; from last year’s Super Smash Bros. on Wii U all the way back to the first Mario and Sonic at the Olympic games for the Beijing 2008 Olympics.

Rio 2016 (like previous entries) is a mini-game compilation, with fourteen events (twenty-eight if you include the powered up ‘Plus’ events) within which you will test yourself in activities such as hammering a button, swiping a stylus and waving the console around in your pursuit of Olympic gold. There are other events around these too, such as the triple jump, shot put, relay races and more, but these are restricted to training events within the story mode. I’m not sure about the thinking that decided which events would be the main ones, but there are some really odd omissions.

Joining the list of events this year is Golf – which returns to the real life Olympics for the first time since 1904 – which, while doing away with the tapping and/or rubbing mechanics, only provides an adequate representation of the actual sport, with inaccurate readings of the lay of the land, and your inputs, causing you to struggle to get your shots to go the distance you want them to, especially when you’re attempting to go short; the amount of times I went for half power and somehow hit at 75% were numerous. If I had verbally expressed my frustrations I would have got some very odd looks from my fellow commuters. To say this isn’t a patch on Mario Golf would be an understatement.

The control schemes across all the events range from ridiculously simple to incredibly complicated, and many of them aren’t suitable for playing in public. Playing motion-themed events like archery can be a problem when you’re in a moving vehicle (when the vehicle turns, the DS will read that and move your view), and look downright creepy when it appears that you’re pointing your DS at people in your vicinity. Then there’s the button mashing events like the 100m dash and long jump which require a solid base on which to place the handheld. Trust me: you look weird mashing buttons or swiping a stylus back and forth when you have the DS sitting on your lap.

While playing solo the events at least start off fun, but when that fun fades repetition sets in. The good thing is that once again SEGA have made use of the 3DS’ download play, that lets other people with 3DS systems take part in the events in local play whether they have the game or not. This at least allows for a lot of silly fun to be had once you’re fed up with playing alone. Everything is better with friends. All the events are playable with a huge character roster featuring pretty much everyone from both franchises. While this gives you a lot of choice over who to play as for each event, it really serves as a reminder of how forgettable the Sonic line-up is; characters like Wave, Jet and Zavok eliciting a reaction of ‘Who?’ rather than ‘Cool’. Then there’s the fact that each event will only give you a choice of seven characters rather than everyone. Thankfully, you are given the option to use your Mii, but while each character has their own stats giving them advantages over each other, your Mii has nothing going for them what-so-ever. This then leads you to the game’s story mode, Road to Rio.

Mario and Sonic are seemingly keeping their age old rivalry alive, by running separate gyms training competitors for the games. During the festivities all the medals from previous years are stolen, and it’s up to you to win gold in every event to distract the public to prevent pandemonium from breaking out. As far as a narrative goes for giving a reason for one person to take part in multiple different events, it’s serviceable nonsense.

Road to Rio really only exists to “train” your Mii to a point it can compete with the rest of the character roster. Your Mii’s low basic stats never improve, and instead are boosted by equipping clothing. Training grants fitness points which give you the right to use different items of clothing or costumes to improve your stats for the events you partake in. The gaudier the outfit, the better the stat boosts you get, like carnival outfits for instance.

The best stat boosts, however, are reserved for character outfits, from little known characters like Sticks (who?) to Sonic and Mario themselves (I spent the majority of my time dressed as a Chao). These then give you the exact same stats as that character… This at least gives your Mii a fighting chance against the featured franchise characters, but they’re locked behind discoveries and purchases within the story mode. Considering you can earn the currency elsewhere this should have been made an option on the main menu.

Road to Rio has two paths – one for joining Mario’s gym, and one for Sonic’s – both of which end with the same conclusion. A play through of both should get you enough training to wear the best outfits, and enough currency to buy them all, but once done there is little to no reason to go back, unless you’re really desperate to find every hidden item (spoiler: it’s not worth it).

My final bugbear has to be SEGA Sports R&D’s implementation of the system’s 3D effect. It’s really badly optimised, with jagged edges and odd items affected by the 3D plains (the nose on your Mii for example). Then there’s how the system handles events like archery where you need to move it about, and your head ends up at different angles from the display. This proves to be an issue on new 3DS as well, with the cameras failing to track your position adequately. I started to get a headache from this and eventually disabled it altogether. 2DS owners will be fine, but 3DS users won’t get much out of their machine’s USP.

Overall, Mario and Sonic at the Rio 2016 Olympic Games isn’t terrible. It’s fun in groups, and even solo for as long as your patience holds out, but there aren’t enough events, and the quality of what’s there is wildly inconsistent and not tailored for when you’re out and about. If SEGA Sports R&D had selected what sports they used with a bit more reason, and improved the control schemes, then it could have been much better. As it is, it just doesn’t have the legs.

Support us by purchasing through these links:

Fun with friends.
Download play only requires one copy.

Mario and Sonic aim for gold but just about scrape bronze, a good effort but more training is required.