Mario & Sonic at the Rio 2016 Olympic Games Wii U Review 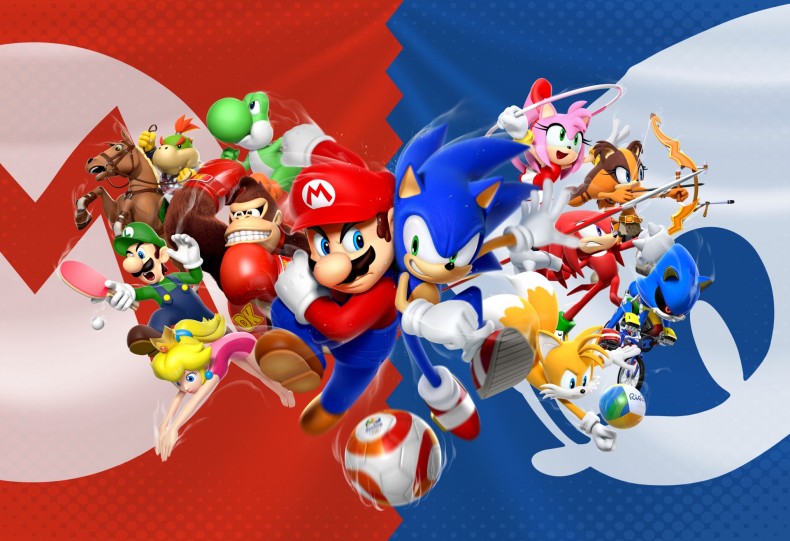 It’s been two months since I reviewed the 3DS version of Mario & Sonic at the Rio 2016 Olympic Games (sod off if you think I’m typing that out regularly), and now the Wii U version is upon us we get to see what improvements (if any) have been added to the game. I mean, given the extra power the platform affords it should be much better, right?

Well, the game is certainly shinier, characters for the most part are better defined – despite some anti-aliasing issues in a lot of places – but locations are full of much more detail: sand moves nicely underfoot and water effects look, well, watery; it’s the step up you’d expect from handheld to a home console. Sound however remains pretty much the same, music carries over from one machine to the next, while the sound effects remain unchanged, but it’s given a boost by a decent sound system should you have one.

Gameplay-wise, though, things have taken a turn for the worse. There’s no main menu, so all your selections are done through a 3D ‘world’ interface solely located on a stylised Rio Beach, you move to an NPC to select what way you want to play and then you’re whisked off to a menu by way of loading screen. Get used to seeing Rios’s cheery DNA spliced hybrid mascot because you’ll be seeing him at least three times to get into an event, and once more to get back out. The whole point of these titles is to provide fun mini-games for people to play, with the point in a mini-game being that they’re ‘mini’. In Rio 2016 you’ll find the events take less time to complete than it takes to learn the controls. There can be one or two screens made up of four pictures for you to take in, each detailing the convoluted control scheme that you’ll need to use to achieve success; there are prompts during the events but these are more of a halfway house solution as you’re likely to have forgotten what it is you’d have needed to do during play anyway.

Football, Archery and Rugby Sevens are exempt from this awful control situation and prove to be the most fun, despite the issues they themselves contain. Archery loses the motion control from the 3DS version, whether you consider this a bonus or not is purely up to you, but button controls don’t feel like it suits the event at all. Football plays like a basic game of football, with singular pass and shoot buttons. It’s generally ok, but worse compared to its 3DS sibling; there are less outfield players (4 compared to 3DS’s 6) and it loses the power shot bar, which at least gave it a nice Mario Soccer vibe.

Rugby Sevens makes its way to the Olympics this year for the first time since 1924, and makes it into the Wii U game. The 3DS got golf instead, so if you’re undecided on which version to get, that’s something you should probably take your sporting preferences into consideration for. It’s unclear why this had to happen though, surely the Wii U version had space for both sports? Rio 2016 Wii U also drops the 3DS’ story mode, which is a shame, because the sports anime stylings of rival Sonic and Mario camps gave a much better impetus to carry on with the events than this new format does. Here you’ll find yourself in two heats and a final for each event, up against Miis all wearing stat boosting suits. You might be able to cadge the odd win against the AI, but all too frequently you’ll find the odds stacked against you and there’s no quick retry either, it’s always a trip back to the beach and a slog through many other events before you’ll get to go again.

Perform well and win a medal though and you’ll be challenged to a special event by a member of the game’s character roster, success in which will unlock an outfit to improve your stats. Entry into these events cannot be refused though, so, once they start you’re in until the event is over. It makes these more of an annoyance than anything else.

I need to reiterate the point I made about the stat suits from my 3DS review: the best stats are reserved for the costume that reflects a member of the character roster, and grant your Mii the same stats that character has; which begs the question, why not just let you select from the character roster instead or maybe let you ‘train’ your Mii to improve your stats? Having them dress as a particular character removes the personal touch that comes from using a Mii. Finally, only Football, Rugby Sevens and Beach Volleyball have special event types, compared to every event from the 3DS game. The specific rules for these are also much more complicated and considerably less fun to play, you might have a go for the sake of novelty but don’t expect to play them on a regular basis.

Despite the extra shine afforded by the hardware, Mario & Sonic at the Rio 2016 Olympic Games is worse than its handheld brethren thanks to the fact it has less modes, less events and less features. It can be fun in multiplayer, but that’s provided the people you’re playing with don’t get frustrated with the constant learning of different convoluted control schemes. The wait for a new Track and Field game continues.

The delay between versions should have been used to improve what was already there, instead we get a smaller game with a prettier face.