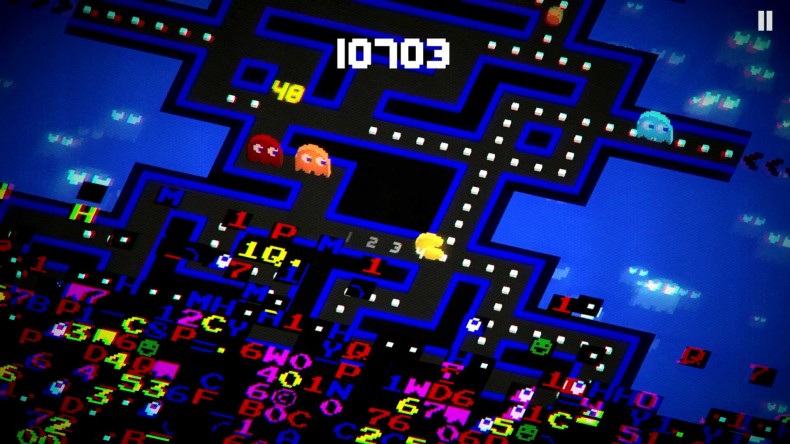 I’m not a big endless runner fan, so, when asked to review a budget PS4 Pac-Man endless runner game I fully expected something that would pass ten fidgety minutes before being thrown on the scrapheap with the rest of its ilk, “go back to mobile gaming where you belong!”

However, what Crossy Road creators Hipster Whale and 3 Sprockets, of Cubemen fame, have created here is an entertaining and addictive mash-up of classic Pac-Man gameplay and endless runner which works really well and has kept me glued to my screen for far more hours than its miniscule price-tag suggested it could.

Taking its clever cue from the infamous level 256 glitch in the original Pac-Man game, which would see the right hand side of the player’s screen turn into a jumbled soup of letter and numbers, here that soup become a tsunami, slowly engulfing everything in its path, devouring all before it and pushing the player headlong through an endless maze filled with randomly generated ghosts, pickups and power-ups. You’ll instantly recognise your enemies if you’ve played a Pac-Man game in the past and slowly but surely begin to relearn their various behaviours as those dormant Pac-Man skills begin to come back online. Blue ghosts traverse corridors in a repeated pattern, orange drop in a straight line, red acts like a homing missile while pink (or Pinky) waits for visual contact before striking at speed to put an end to your pellet munching.

All of the classic gameplay is here and it isn’t long before you find yourself back in that Pac-Man trance, slowly transitioning from the panicked charge forward of a newbie to a much more considered, side to side means of traversal, scanning the horizon, planning your advance and making those signature last second escapes to, very temporary, victory. To aid in your march up the leaderboards Hipster Whale and 3 Sprocket has added a whole host of ghostbusting powerups to proceedings and amazingly none of them interfere with or break the classic gameplay.

By doing what a Pac-Man does and eating every pac-dot in sight you’ll gain access to hurricanes, stealth, trails of destructive fire, mini pac-men who devour every ghost in sight, a proximity bomb and ghost-blasting laser, to name a few of the tons on offer here. All of these power-ups are upgradeable through eight levels using credits which you obtain by completing special missions such as “kill ten ghosts with bombs” or “eat 15 cherries” and three can be allocated to your inventory at any one time, appearing as random drops scattered around the maze as you go. There is a beautiful balance here between learning to avoid the various ghost types, completing missions and grabbing fruit multipliers to boost your score all while trying to outrun the 256 glitch. Add to this the fact that eating an unbroken chain of 256 pac-dots gives your score a mega boost and Pac-Man 256 has you juggling a sizable to-do list as you rush through its corridors.

It’s very important that, in order to offer more than just a few minutes of diversion, endless runners, due to the heavily repetitive and singular nature of their gameplay style, put players in a zone, totally focused, bombarded with things to do, and with enough happening tactically that they forget about the fact they are ultimately rushing to their doom. The best runners achieve this and Pac-Man 256 is up there with the best I’ve played in this genre.

Originally a free-to-play game released on mobile last year, here console and PC players avoid the irritation of incentivised adverts, pop-ups, credits and all that other free-to-play guff by paying £3.99 and being left alone to enjoy the game. Alongside standard one player action, four player local co-op is available and adds a nice layer of fun to proceedings, while online play is only available via Share Play, which is a pity because some sort of proper online competitive mode would work really well here.

Add to all of this unlockable character skins, as well as a bunch of different level styles such as Classic 80s Pac-Man, Pac-Mania, and Crossy-Road, and you’ve got a great little game that will keep you entertained for far longer than that footlong sandwich you could have bought instead.

Decades after Pac-Man’s original appearance, Pac-Man Championship DX breathed new life into the classic formula, Pac-Man 256 continues that tradition, taking the classic addictive gameplay we all know and love and successfully mixing it with the endless runner genre to create a surprisingly good and extremely affordable little gem.

Loses some of the old charm
Repetitive by nature

Takes the classic addictive gameplay we all know and love and successfully mixes it with the endless runner genre to create a surprisingly good and extremely affordable little gem.