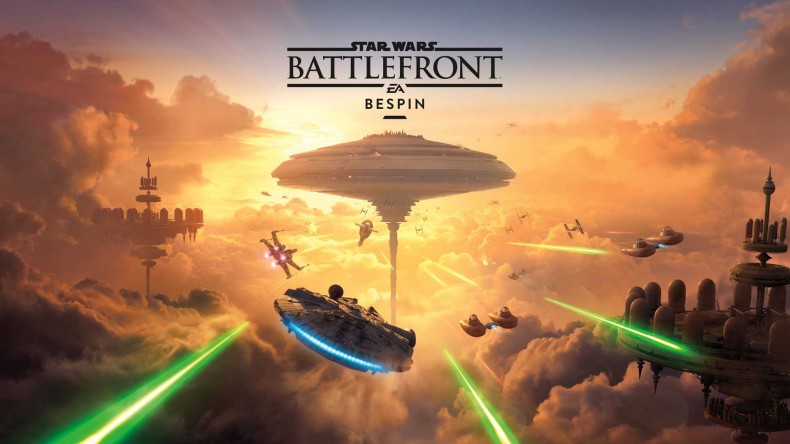 I have a confession to make, I really like Star Wars Battlefront, I know it isn’t the best game of it’s type out there, but there is something about it that I really enjoy. It looks and sounds fantastic, but one of the things I enjoy about it most of all is that it’s a game I can dip in and out of very easily if I want an hour of firing laser beams at rebel scum. There has been valid criticism levied at it in terms of the lack of meaningful squads for example, but as the months since launch have progressed there has been much added to it to improve on its weaknesses. With the launch of the second DLC pack set on the cloud city of Bespin, DICE has also released a huge update to change some of the fundamental elements of gameplay which have quite large implications for the way the game is played.

You still only play with one partner, but that appears to be more meaningful in this latest update with bonuses for sticking close to your partner, for example your star card refresh rate is boosted and if your partner is killed the enemy is highlighted in red for a short time for you to exact revenge on their behalf. There are also changes to the way you score points; assists now provide the same points as a kill which goes a long way to encourage some team play that seemed to be missing slightly from the original game.

The Bespin DLC itself adds a further five maps to the roster, a new game mode called Sabotage, new Hutt contracts for unlocking new blasters, traits and star cards, as well as a couple of new heroes to play around with including Rebel hero, or traitor depending on your outlook, Lando Calrissian. With the release of the Outer Rim DLC back in the spring I suggested that there wasn’t quite enough in the content pack to persuade players to drop everything and purchase the season pack for all future releases, and sadly it seems that Bespin does little to change that view. It’s not that the content is poor, because it isn’t, it is more how the content is made available. If you own Bespin, or Outer Rim for that matter, you can only play it via its own separate play list, separate from each other and away from the main game. All that achieves is to split the player base across three different play lists which could become an issue if player population reduces. Unlike Outer Rim, Bespin provides larger maps to play on with teams of 16 battling it out, not quite as many as the larger maps in the main game, but certainly bigger than the 8v8 games of Outer Rim. With the larger maps there is also a wider choices of game modes to play on including bigger versions of Drop Zone and Droid Run as well as Supremacy and Bespin’s own version of Walker Assault. Playing Drop Zone with 16v16 is frantic, insane fun, and I am pleased that one of my favourite modes from the smaller game types has been given the bigger map treatment.

Walker Assault feels a little out of place within the cramped streets and hallways of Cloud City, but the sight of an AT-AT slowly stomping towards a final point is always an impressive sight. So far I have yet to see the Rebel team manage to stop the Imperials from winning on Walker Assault as it is quite tough to get a decent line of sight on the Walker to bring it down in time. This will no doubt change over time as people get used to the nuances of the map design, but at the minute be prepared to be overrun. There is a new flying vehicle called the Cloud Car which can assist in doing precious damage to the Walker during the Y-Wing Assault, but they require a significantly more skilful pilot than myself if they aren’t to end their fly time in flaming ball of death on the side of a building. Elsewhere there is a new game mode to play and I am happy to say it’s a lot of fun. In Sabotage, the Rebel team claims three points and needs to hold them before the Imperials blow them up. Should all three points be destroyed the Rebels then retreat back to a final stand point and are required to hold that until the timer runs out in order to win the game. It is, at times, complete mayhem and with the improved gameplay elements it is a very welcome addition to the game mode roster.

As expected, the maps are beautifully rendered. Flying high in the clouds above Bespin is a marvelous sight in Fighter Squadron, and is really where the scale and grandeur is best displayed. On land, Cloud City is pristine and otherworldly, but sadly seems to lack the majesty and beauty of some of the other maps in Battlefront, and inside in the carbon freezing chambers is dark and claustrophobic. They are all fantastically done, if a little drab, but it is the lack of spectacle with the maps that is the most disappointing. Without the grand vistas of Hoth, or the dappled beauty of Endor, Battlefront is shown up to be a fairly unimagined shooter and I fear that by the time the next DLC shows up in Autumn and the slew of new games of this type start to drop the split player base will be further stretched.

A great new game mode, and the inclusion of Lando Calrissian aside, Bespin is a fairly bland DLC pack that really only serves to split the player base further.