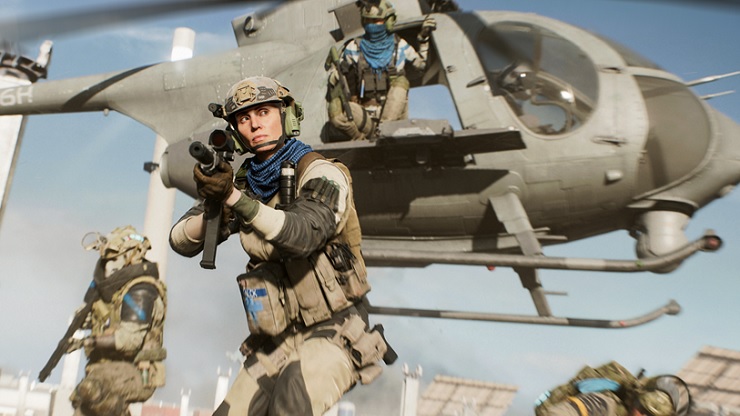 The third major component of Battlefield 2042 has finally been announced as Hazard Zone. Along with All-Out Warfare and Battlefield Portal, a brand new squad-based game mode is set to push teams of friends to the limits as they fight to recover data drives across a chaotic and intense warzone. Battlefield 2042 Hazard Zone isn’t about killing everyone else. It is so much more than that. DICE has tried to incorporate new ways to play their beloved FPS franchise, and this new game type looks likely to become a firm favourite.

Battlefield 2042 Hazard Zone: What exactly is it?

As mentioned earlier, Hazard Zone is a squad-based online experience. Teams of four compete against each other to recover data drives across all confirmed launch maps for All-Out Warfare. Along with fighting against other teams, there will be occupying AI forces ready to take players down. Not only that, but forces of God, such as tornadoes, can wipe entire squads out and strike at any time. On PS4 and Xbox One, there’ll be a 24-player count. However, on PS5 and Xbox Series X, the player count jumps to 32.

There’re five distinct stages of every Hazard Zone match. Before each match begins, players will receive intel via a Mission Area Briefing. During these MABs, players will learn where their insertion point will be and any other important information relating to the match. From here, Specialists are chosen, as are weapon and equipment loadouts, where a special kind of in-game currency can be spent (more on that shortly). There’re also Hazard Zone specific Tactical Upgrades that can be selected, with 15 available at launch. These include additional magazines, stronger armour, and faster healing.

Once the preparations have been made, players are deployed into the map via the specific insertion point. Once landed, it’s time to collect those all-important data drives. All squad members can carry a Hazard Zone gadget known as the Intel Scanner. It helps to reveal approximate locations of the pre-crashed satellites where data drives are found. Data drives can be scanned no matter where they are, or whoever is in possession of them. These drives can be retrieved from crash sites, as well as from other players. However, occupying forces are often protecting the drives. Fighting them is always an option, but any noise could alert nearby squads.

In the middle of a match, new satellites fall from the sky which contain several data drives. They are more valuable as the drives are as yet untouched. After a few minutes from insertion, the first opportunity at extraction opens up. Sure, you can escape now with a handful of data drives. After all, you’ve worked hard to acquire them. A randomised location appears on your map. Once it does, you have a few minutes to board the CV-38 Condor and get the hell out of dodge.

As tempting as it may be to leave early, surviving the match until the final extraction appears is much more rewarding. If an entire squad dies, or you miss the extraction, all the drives collected will be lost. It may be a kick in the teeth, but if just one player excapes, the entire team gets rewarded for it. This last extraction occurs around the 10-12 minute mark. All remaining squads fight for survival. Yes, it’s more dangerous, but the rewards are much greater.

Battlefield 2042 Hazard Zone: What’s so special about the data drives?

Now, I’ve mentioned these data drives a lot so far, but why are they so important? Well, every drive you collect can be converted into a special in-game currency called Dark Market Credits. The more drives you extract from the Hazard Zone, the more credits you get to spend. Dark Market Credits can be earned in other ways, but data drives are the predominant focus as to where they come from. They are spent in the pre-match period on tactical upgrades and loadout improvements that will improve the strength of the player, as well as their chances at succeeding in the Hazard Zone.

All the pressure of these high stakes battles are worth it in the end. It looks like a fun new mode with many components to make it feel different to many of the staples of the Battlefield experience. With teams not allowed to select more than one Specialist, it adds a further layer of strategy to the mode. Extraction Streaks can be acquired that provide Specialists with a +1 on successful rounds. A high streak offers discounts when purchasing items pre-insertion, but failure resets the streak.

Video games are cool. Don't let anybody tell you any different.
MORE LIKE THIS
battlefield 2042diceEA