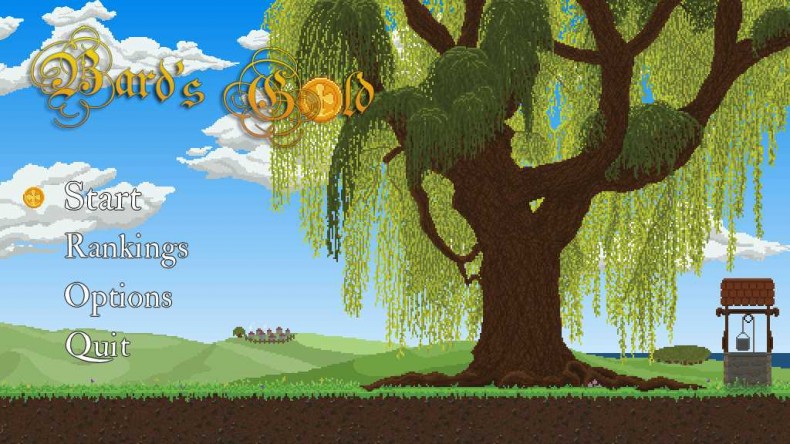 Everyone loves a roguelike, right? From the hardcore of Dark Souls to the more lighthearted, but no less brutal, Rogue Legacy, and the mode sideways entries like FTL and Darkwood, Roguelikes are ingrained in gaming folklore. This makes it all the more difficult for new entries to differentiate themselves from the pack.

Bard’s Gold is one such game that, well, doesn’t bother trying something different. Developer Pixel Lantern takes the formula of Rogue Legacy and mixes it with that of Spelunky, choosing to offer a series of levels in which the titular bard needs to find a key in order to exit each level before the timer runs out. It’s very old school in its approach, and it works.

A side-scrolling platformer with pixelated visuals, the game isn’t exactly stunning. Mainly due to the pixel art being quite crude and its animation rudimentary. The actual enemy designs are nice and varied at least, with each of the game’s four worlds offering some very different monsters based on the current world’s theme. For example, the Egyptian themed level comes with giant scorpions and strange, alienesque robots that float overhead, raining balls of molten death down on unsuspecting bards. Battling this plethora of enemies is as simple as you could wish for, with controls that make the game easy and fun to play. You move left and right, jump with the X button (a second press will result in a double jump), and attack with the Square button, throwing small daggers at anything in sight. These weapons can be upgraded in the shops dotted around each world, with throwing axes or chakrams (circular blades) available, but these only last until your inevitable death. On normal difficult you’ll start with four lives, one hit will kill you and send you back to the level’s entrance, but your current level progress will remain as it was. Killed enemies will remain dead, if you collected the exit key it will stay in your possession, but the loss of all your lives will be a game over – much like Rogue Legacy however, any leftover money you have can be spent on upgrades to make subsequent playthroughs a little easier. Reaching another world will leave it unlocked, making it a little less cruel than Spelunky, but it does mean that finishing the game is a lot quicker and there isn’t much in the way of replayability either.

At the end of each of the four worlds you face a boss, all of which show a design and animation quality way beyond that of the rest of the game. It’s a shame this detail wasn’t lavished upon every creature in Bard’s Gold, but it does at least offer a highlight at the end of each world, a prize for reaching each boss battle. These battles are fairly simple and formulaic, the giant enemies following set patterns that you learn and exploit to defeat them, but they’re not exactly easy. That said, not one of them offers the kind of challenge seen in most roguelikes, and some can feel a little cheap with the one-hit-kill nature of the standard difficulty. There are three difficulty levels in the game: normal, retro (the same as normal but you start with less lives) and roguelike, which offers a health bar in lieu of lives. This sounds easier, yes? The catch here is you can’t upgrade and return to later levels, effectively turning it into a permadeath run. This can be especially challenging when you take into account the various traps dotted around each level. Hidden floor switches result in sharp objects hurtling at the poor bard’s face, requiring cat-like reflexes to dodge, spike traps can take you by surprise from above and below, either sticking up through the ground or dropping from the ceiling. They’re all fairly easy to spot if you’re paying attention, but a loss of concentration or a distraction as you battle an enemy, can ruin the bard’s day in a heartbeat.

Bard’s Gold may not be the prettiest game you’ll ever play, but it does offer a few hours of fun and a decent challenge on roguelike difficulty. It’s a shame that it’s so short though, as it could have enjoyed the same success as its inspiration.

Bard’s Gold is like the bastard child of Rogue Legacy and Spelunky, but it’s more Ramsey Bolton than Jon Snow.