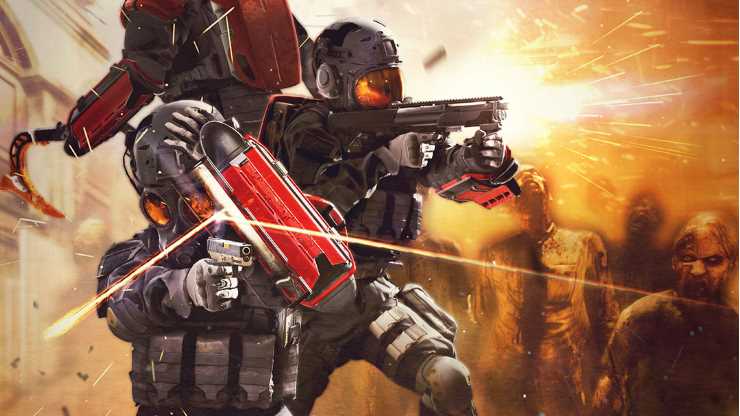 We all have our favourite Resident Evil memory and we can all recall the moment we fell in love with the series. For some it was the second those ravaged zombie dogs jumped through the windows in the original Resident Evil and for others it might have been escaping the constant threat of Nemesis in Resident Evil 3. In over 20 years, there have been so many great Resident Evil titles that it’s hard to pick our favourite, but there have also been some massive disappointments too; it feels genuinely gutting to get a game as vapid, rushed and lazy as Umbrella Corps and a shame Capcom didn’t learn their lesson after Operation: Racoon City.

Umbrella Corps is set 2 years after the events of Resident Evil 6 where you play as a mercenary sent into a selection of familiar locations trying to find some valuable viral BOW research that has been lost in the wake of a global tragedy. The story is inconsequential which is fairly obvious from the outset; if you’re expecting anything resembling a narrative you’ve come to the wrong place.

The fundamentals don’t take long to get used to and as you plough through the basic and advanced tutorials you’re briefly shown what you’ll be able to do. The game is in a third-person over the shoulder view, however, your mercenary takes up almost a third of the screen and when you’re running around trying to look for threats, they aren’t always easy to spot. Weapons range from pistols to machine guns to shotguns, and there are explosives available too, but the one weapon that does give you a bit of joy is the brainer: a pick axe you can use in melee to put a hole through an enemy’s noggin. Another tool at your disposal is the terrain spikes on your boots, and they can help you traverse some of the walls you encounter, helping you to make a quick getaway under pressure or sneak up on an unsuspecting opponent. One of the other features Umbrella Corps tries to incorporate is its cover system, but this is more of a hindrance than anything else. Available cover is highlighted with a blue outline and with the touch of a button you have a temporary safe haven. Trying to move along a wall or getting out of cover can prove more difficult than it needs to be, and you’ll often find wrestling with cover leads to the enemy taking advantage. In fact, movement is weird full stop. You move at the same speed when prone as you do running so when you’re moving around in the dark, become a snake to really piss off your opponents to get a few sneaky kills.

The game features two modes: The Experiment, which is a single-player slugfest, and the online multiplayer – each with their problems and failings. The Experiment has you advancing through different stages with new challenges for each stage; you’re essentially fighting waves of the same enemy in different ways albeit relatively straightforward and the fun is all but lost after around 5 stages. The online element is incredibly weak, and when I did finally get into a match after waiting a painfully long time in the lobby, I was let down by a ton of different facets of the game. The two online matches you can play are one life matches and multi-mission matches. The former is the game’s best feature, and has you being a bit more cautious than normal because if you die, you won’t spawn until the next round. The multi-mission matches are a collection of different objectives changing between rounds and attempting to mix things up a bit, but really with only having 3 minute rounds (which are unchangeable in ranked matches) they never allow you to get stuck in. I suppose the emphasis is on pace and action, but I just found each round to be a waste of an interesting game mode. Each of the maps is pulled straight from a famous part of the first 5 games (with the promise of Lanshiang map from Resident 6 later down the line) such as the Village in Resident Evil 4 and the Racoon City Police Station from Resident Evil 3. On first glance, these maps do a nice job of recreating some of the more popular scenes from the series, but to try and play in these areas is utterly frustrating. Firstly, the maps are too small and leave very little room to make yourself elusive, and maps like the police station are cluttered with plenty of obstructions that make it hard to move freely around them. When you die there is no option for you as to where you spawn from and there were many times I was dropped right next to an opponent with a very large gun, meaning I was dead before I even got to pull the trigger.

A Resident Evil game wouldn’t be complete without zombies, and Capcom has tried to have them intervene in online matches. In each map, you’ll have zombies, dogs, crazy villagers and more potentially causing you grief if your zombie jammer is damaged by another player. If they get hit, the various zombies will attack you and kill you before you’re enemy does, but most of the time they just get in the way and cause the whole experience to be claustrophobic and irritating. The game suffers enough without the failed inclusion of zombies into proceedings, and trying to find your enemy is hard enough.

Umbrella Corps offers an upgrade system, customisable characters and a selection of weapons, decals and outfits to unlock, but without great gameplay, these features fall on deaf ears. The game features bugs and frame-rate issues that hinder any semblance of enjoyment and the messy and busy maps damage any brevity of fun you may have with it. The visuals are weak, the online match types are weak and the overall experience is a lot to be desired for.

Umbrella Corps is a weak shooter that seems far too rushed and empty for any real fun to be had with it.