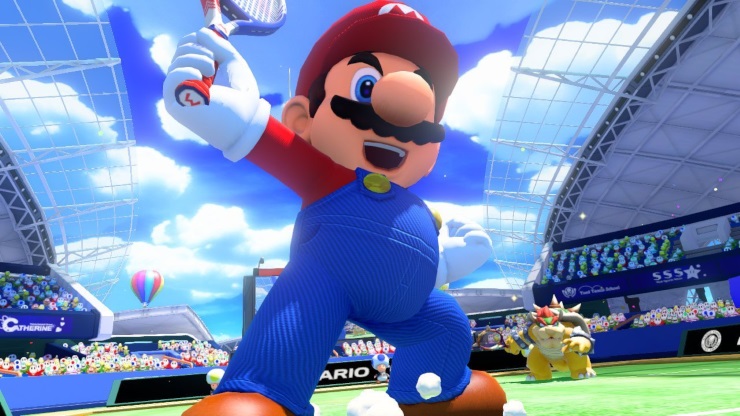 Mario’s adventures in sports games are legendary, and almost always fun. Take Mario Golf: World Tour, which was enjoyable and had plenty of reason to keep coming back, even down to the inherent amount of holes and courses you get in a golf game. Even the Olympic Games titles have variation and offer up a great local multiplayer experience.

Ultra Smash, however, feels decidedly lacking in options and reasons to come back. The gimmick here is that Mega Mushrooms will be thrown on from the side of the court, allowing you to grow huge, and thus hit the ball back with more power. It works fine for a while, giving a few laughs as each of the included characters become gargantuan in size, looking all the more silly for it.

It’s quickly apparent that this is a decent tennis game, with all the obvious shot options you’d expect from something like Virtua Tennis, which, in my case, means that Mega Battle becomes something you don’t want to play very often, mostly because every time you get one it cuts to a mini-scene showing you growing, and after seeing it ten times it does nothing apart from take you out of the flow of the match. It also often shows up the AI as being average, as it’ll sometimes completely ignore the Mega Mushroom that is right behind it. AI doubles partners often just stand still, too, as though waiting for you to slip up in order to bail you out. But it’s because the fundamentals are good that Ultra Smash is actually so playable, because there’s so little content on here it’s a little shocking. Only having the one power up seems egregious on its own, but the fact there’s no career mode at all is just baffling. By all means build your game around local and online fun, but to have nothing here to keep the solo player coming back, well, that seems a like a poor decision.

Knockout Challenge lets you team up with an Amiibo in 2v1 tie-break matches, but the single stadium and that solitary power-up means that you still feel like you’re doing the same thing as the other modes. Mega Ball Rally offers some single player variety, asking you to hit an over-sized ball back to an opponent to keep the rally going, but your foe will be trying to score a point. It’s a nice challenge but it’s simply not enough. All of this gives you coins (cumulative per match in Knockout Challenge) which you can use to unlock other characters, AI difficulty (Pro and Ace), and the Ice, Carpet, Sand, Mushroom, Bounce-out, and Morph courts. I’d recommend you grab the courts quickly, just to add some variety to the options, because that one stadium gets old very quickly. The fact you can unlock these items with coins and they’re not just a reward for playing and progressing speaks volumes about the lack of content, too.

It looks good, as you’d expect, and while the characters utter their usual catchphrases, the music feels by-the-numbers, at times sounding urgent for no apparent reason. I hate to harp on about it, but it’s so light on things to do and see that there’s little else to say, it’s all serviceable, but no one moment stands out as looking or sounding great. This just feels passionless and lacking the soul that it should have. There’s definitely fun to be had in performing an ultra smash that scores you a point because it’s a body shot, however, and online play works well enough. But the fun is best had in local play, as you’d expect. Switch off the power-ups and turn this into a standard tennis game that happens to have Mario and friends in it, and you’ll have a blast for a little while. It’s less technical than a Virtua Tennis or Grand Slam Tennis, but there’s nuance to the shots that rewards the skilled. Basically, if you plan to buy Ultra Smash for single player, you’re a fool. Get it if you’ve a gang of like minded friends to play with locally, but don’t expect many options or a long lifespan.

Ultra Smash is the most underwhelming Nintendo game I’ve played in a very long while. It feels utterly bereft of content, with a gameplay gimmick that wears thin after a few matches, and an online that works, but will (as usual) be dependent on being heavily populated – which just seems unlikely. As a full price game, there’s no real way I can recommend it unless you’re absolutely desperate for some Mario Tennis. The fact that it’s a mechanically solid sporting experience can’t save it from mediocrity or a lack of any real reason to come back, and that’s really the worst sin a sports game can commit.

The fact that it's a mechanically solid sporting experience can't save it from mediocrity or a lack of any real reason to come back, and that's really the worst sin a sports game can commit.